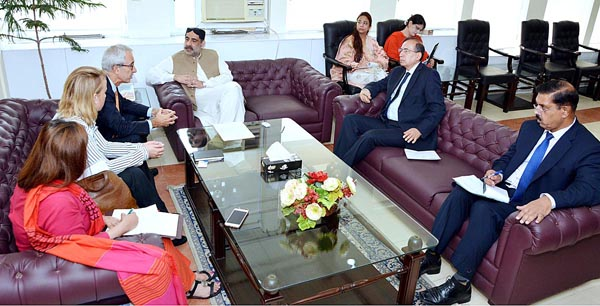 The Dutch Ambassador to Pakistan, Wouter Plomp, says that nine Dutch companies are interested in investing in Pakistan’s poultry and livestock sector.

He said this in a meeting with Federal Minister for National Food Security & Research, Mehboob Sultan. They discussed agricultural cooperation between the two countries during the meeting.

According to the ambassador, out of these nine companies, two deal with pharmaceuticals (poultry & livestock vaccine). ”We are looking forward to materializing those objectives of investment in the agro sector here in Pakistan,” he added.

The ambassador said that agricultural cooperation is their top priority and the exchange of research and technology will benefit both countries. He also informed the Federal Minister that the Dutch Agriculture Mission is planning a seminar in November 2019, which would be a great opportunity for potential investors and experts to exchange proposals for cooperation in various sectors including, dairy, poultry, horticulture, etc.

The minister said that bilateral relations between Pakistan and the Netherlands had good future prospects and will help the two countries benefit from each other’s expertise in agricultural research and development.

Federal Minister Mehboob Sultan said that Business to Business liaison between the exporters/importers of agro-commodities is imperative to enhance bilateral trade between the countries. He added that Pakistan is already importing seed potatoes from Holland but the current quantity is lower than the demand. “We will welcome Dutch companies investment on this front,” he said.

The trade between both countries can be further enhanced by negotiating SPS requirements for the agricultural goods, he added. Pakistan has been importing most of the potato and other seeds from the Netherlands.

Federal Minister Mehboob Sultan said ”We have set an ambitious target of processing 30% of milk in the next 5 years, which currently is only 5%”. He continued that many Dutch dairy companies are already collaborating in the field, there is great potential in the field and the exchange of technology and expertise from Dutch companies is welcomed.

The Minister says that since the current government has prioritized the agriculture sector, it will take all possible measures to benefit farmers and uplift the sector.