In a bid to strengthen its foothold in the Pakistan auto industry, Al-Haj Automotive has partnered with one of China’s largest bus manufacturers, the Zhongtong Bus manufacturing company.

In this regard, both companies inked an MOU focusing on tech transfer and CKD operations with the ceremony taking place in China with high-ranking representatives from both sides. 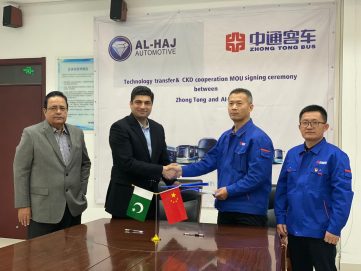 According to the agreement between both countries, Al-Haj will assemble, promote and seel Zhongtong buses in Pakistan with varying configurations, sizes, and seating capacities.

Zhontong’s most renowned for its TransJakarta, which is a Bus Rapid Transit system introduced in Jakarta and Indonesia. The system is considered to be Asia’s first-ever BRT system as well.