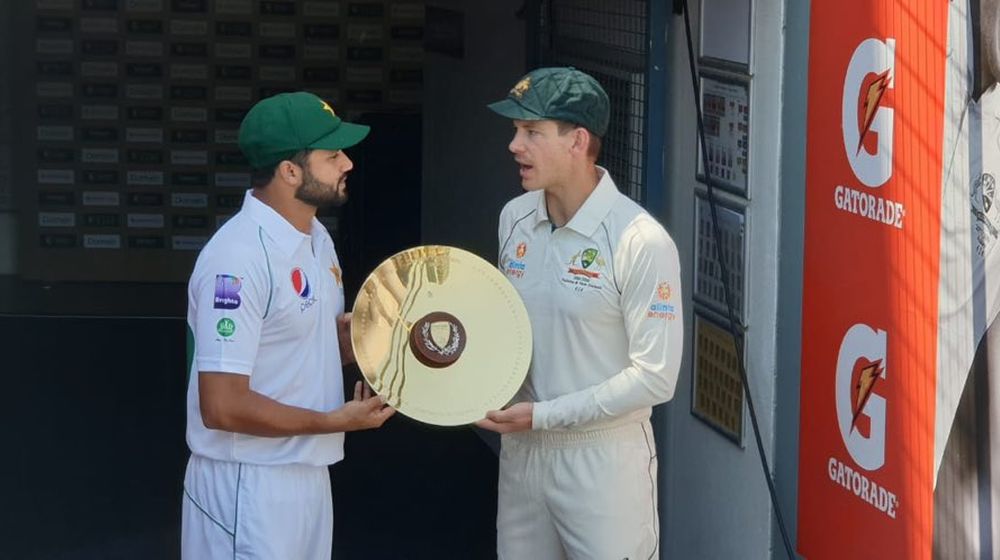 Australia hasn’t lost a Test match at the Gabba in Brisbane in 30 years and defeating them at their stronghold will be a massive challenge for Pakistan cricket team. It’s the same ground where Asad Shafiq’s epic almost pulled off a heist to snatch victory from the jaws of the Aussies while chasing 490, ending only 40 short of the target.

The two teams will take the field at 5:00 am (Pakistan Standard Time) and the most exciting part is the Test debut for rookie pacer Naseem Shah as captain Azhar Ali and the team management have given him a green signal ahead of the first Test.

The trophy unveiling ceremony took place earlier today at the Gabba where the two captains and teams were pictured with the dazzling Domain Cup trophy.

Let’s have a look at some of the pictures:

The team management will now have to decide whether to go with 5 specialist bowlers or play an extra batsman in place of 5th bowler. Haris Sohail’s form has been a worry for Pakistan, and it remains to be seen whether he gets a nod to feature in the opening Test or not.

Plenty is at stake in Brisbane as Pakistan is set to play its first match of the Test Championship. The match will be broadcasted live on PTV Sports and Ten Sports in Pakistan whereas, for live streaming, you can tune in to MJunoon TV.

Here are the probable playing XIs for Pakistan and Australia:

Pakistan hasn’t won a Test in Australia in their last 12 outings, however, a win in Brisbane would set the tone for the Men in Green for the remainder of Test Championship.