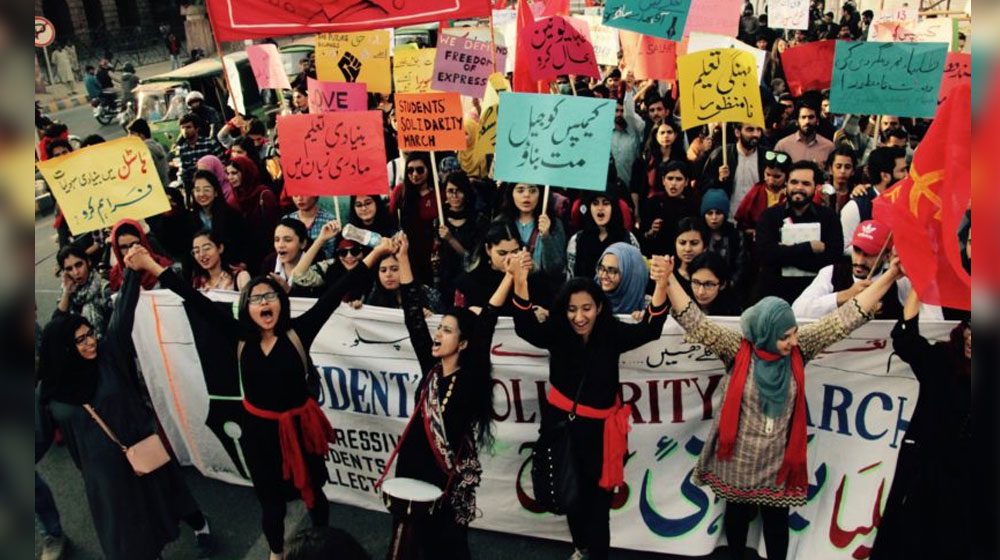 Students, activists, and supporters have taken to the streets across Pakistan to record their protest under ‘Students Solidarity March.’ For an avid social media user, the #StudentsSolidarityMarch won’t be a new thing, as it is currently trending hot on Twitter and Facebook.  But, not all of us are aware of its backgrounder. Read on to know what is the Students Solidarity March and why & where is it happening?

What is Students Solidarity March?

The issued started to heat up when last week, a video of a group of students went viral.

In the video, a woman student can be seen chanting the slogan, “Sarfaroshi Ki Tamanna Ab Hamare Dil Mein Hai.” The footage was reportedly from Lahore, and the participants were members of the Progressive Students’ Collective (PSC), the organizers of this whole event.

When Is It Happening?

Under this banner, these organizations are carrying out rallies on the regional level on Friday (today). As per a tweet, PSC’s official Twitter handle, demonstrations are being staged in 50 cities across the country.

Rawlakot
A) Degree college to Zaheer Chowk
10.30 am
B) Poonch University to Main Road
11.00 am

Twitter is filled with demonstrations videos and photos from all major cities of Pakistan, some of them are as under:

Sitting, standing, chanting listening speeches at Press Club Karachi in an account of #StudentSolidarityMarch.. I feel proud to become part of this great movement as PPP is only Political party that vocal for Student Union.@BBhuttoZardari @BakhtawarBZ @AseefaBZ @KasimGillani pic.twitter.com/Or9MQ3oNkS

#StudentsSolidarityMarch at Hazara University Mansehra. Great enthusiasm. The 68% of the population are raising voice for their basic rights. @PSCollective_ @Taimur_Laal pic.twitter.com/duMCtY01Z9

Why Is It Happening?

While each rally raised voice on their local issues, primary demands remain the same. The Student Action Committee has released a 10-point Charter of Demand, which has been listed below:

What is Next for Solidarity March?

This is not the first time such an event has been organized in the country. But, the momentum and the media coverage this year’s march has received is unprecedented.

Not only did it find space in the headlines, political bigwigs like Bilawal Bhutto Zardari also threw weight behind this mega students’ movement.

Here is what Bilawal said:

end to privatization of public universities, implementation of sexual harassment legislation, right to student housing & the demilitarization of campuses. The spirit of activism and yearning for peaceful democratic process from a new generation of students is truly inspiring. 2/2

While this solidarity march is yet to take any shape in the recent political scenario of the country, the political commentators are seeing it as a next big challenge for the incumbent government in the days to come.