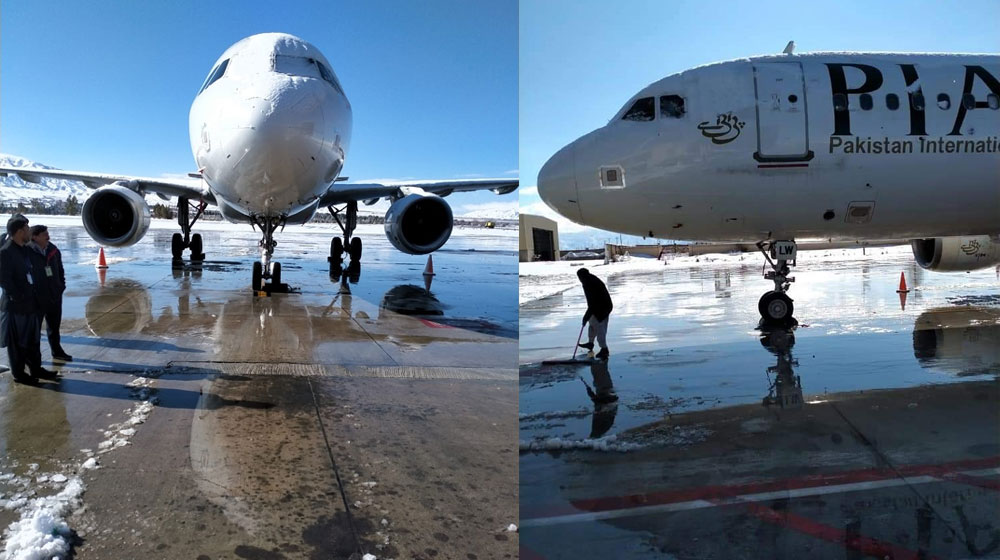 A PIA spokesperson, Abdullah Khan, said that the plane could not be ‘rescued’ due to the absence of a de-icing facility at the airport.

The provision of a de-icing facility at the airports is the Civil Aviation Authority’s (CCA) responsibility, which the authority had failed to fulfill.

Khan said that heavy snowfall started as soon as the return flight from Jeddah landed at the airport because of which the aircraft was left stranded.

“Due to unavailability of any support from CAA, we are forced to remove the plane from the ice ourselves.”

The prevalent weather condition has forced the national airline to cancel all its scheduled domestic flights to Quetta.

PIA announced on Monday that it has canceled PK-325 and 326 Islamabad-Quetta-Islamabad, PK-310, and 311 from Karachi-Quetta-Karachi and PK-863 from Quetta-Karachi.

PIA has apologized for the inconvenience caused to passengers and has advised them to contact the call center before leaving for the airport.

It is worth mentioning here that the airline has also rescheduled some of its flights for Dubai, which has been under the spell of heavy rains. Flights from Karachi and Peshawar have been canceled, and the passengers have been adjusted to the other flights from Lahore and Islamabad.

PIA will use larger aircraft, Boeing 777, for these rescheduled flights instead of Airbus A-320.