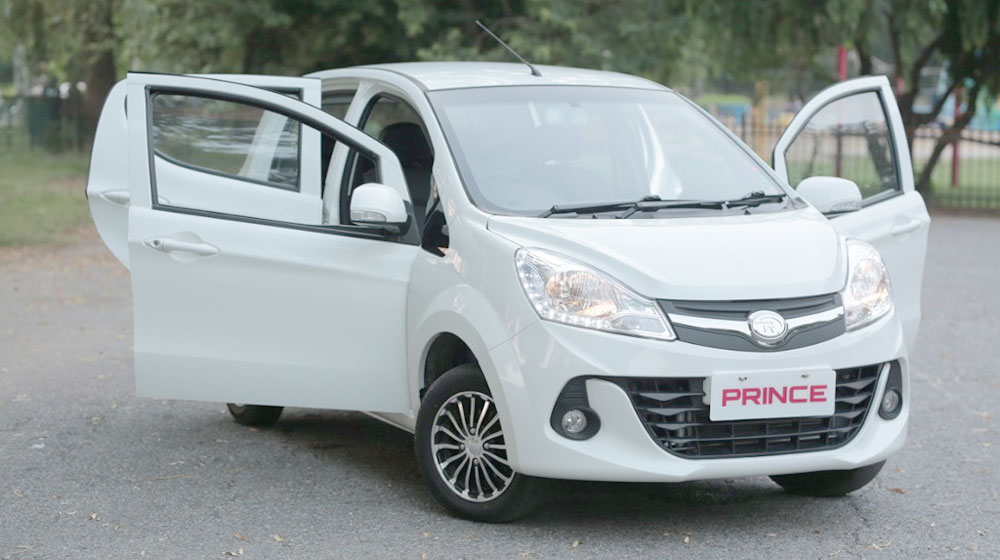 By Hasan Saeed and Haamiz Ahmed

The hatchback that everyone was waiting for has finally been launched. Competing with the United Bravo, Prince Pearl is looking to be quite the competitor for the features it promises. 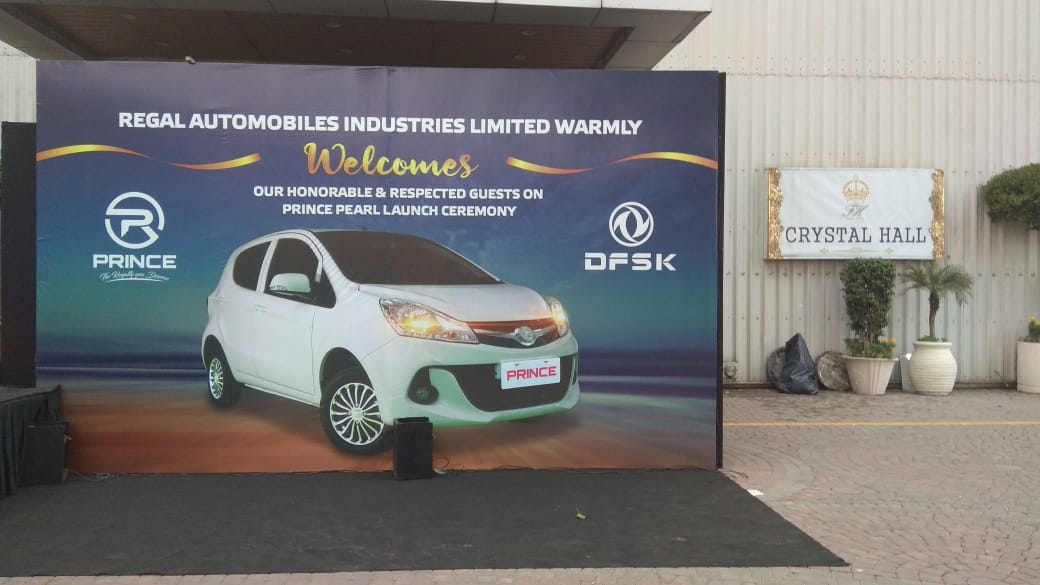 While the Bravo was launched by a Chinese manufacturer to mixed response and the company was forced to relaunch it late last year. Yesterday, the Pearl was officially launched by DFSK in Lahore. 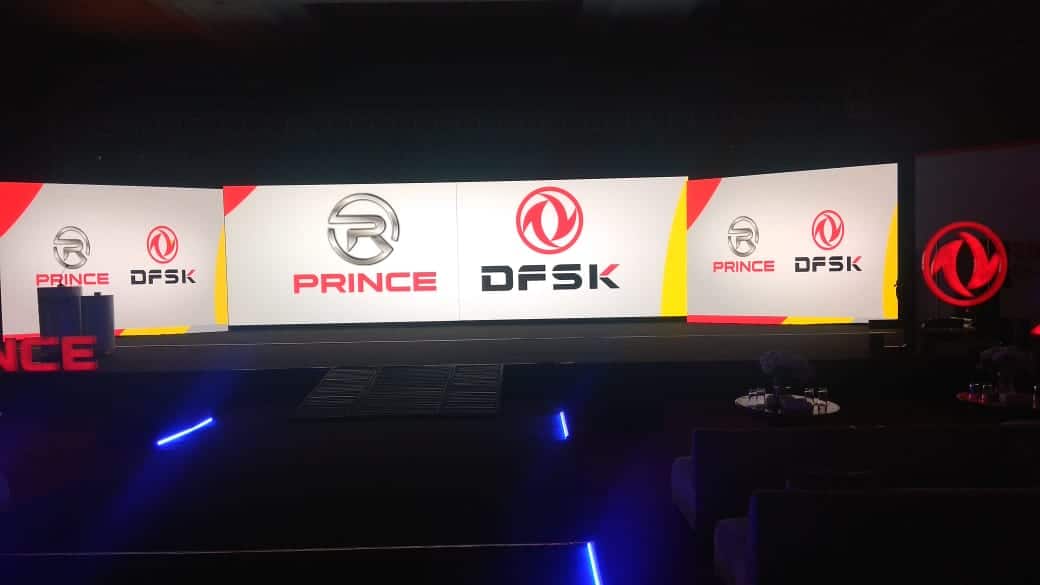 Interestingly, the Bravo was launched in direct competition to the Mehran but since the Mehran was discontinued it will go head-to-head against the Pearl to capture the market.

So, without further ado, here’s Prince Pearl in all its glory: 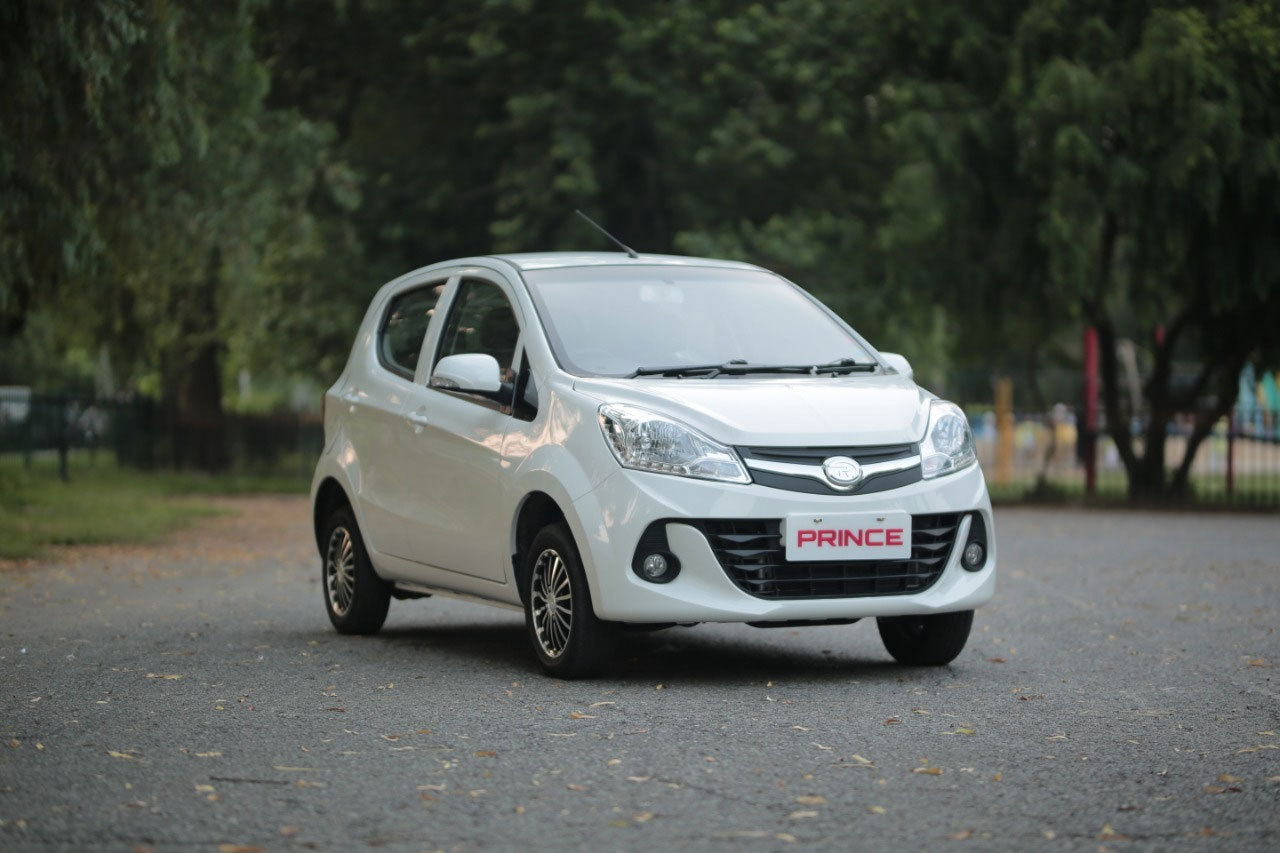 It is a step-up from the Mehran with contemporary LED lights and fog lamps at the front, alloy rims and at the back, the rear-lights are placed in the middle.

This gives it a stylish and contemporary look that is to be expected from any modern hatchback and the large curved grille at the front and a slightly curved bumper making it more pleasing to look at. 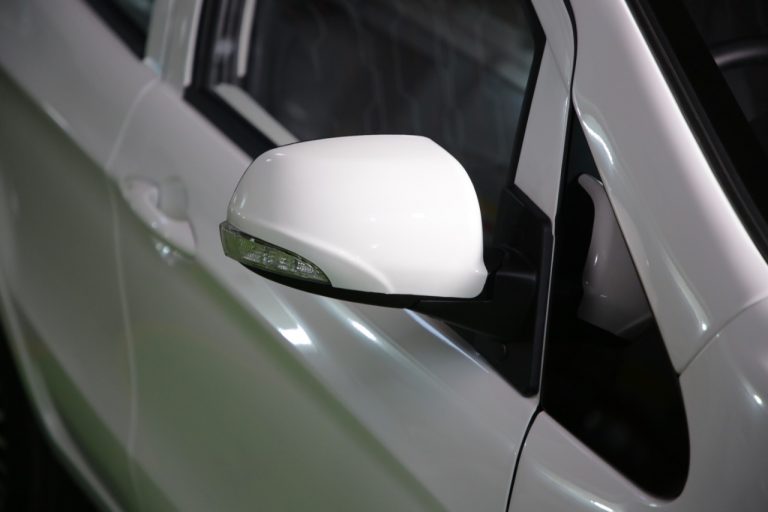 The side mirrors are body-colored and auto-retract when you turn off the car. It also features LED turn-signals on the side mirrors which isn’t something you see in other cars in this price range. 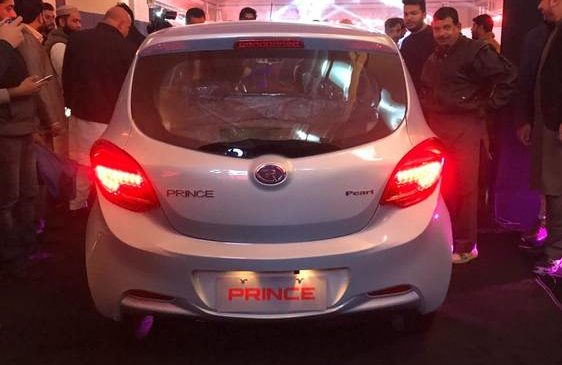 Moving on to the back, it features round/curvy aesthetics. There are some interesting quirks though. The “PRINCE” and “Pearl” are in different fonts altogether with Prince written in all-caps. Other than that the tail-lights appear to be fairly large but have a small arrow-like shape when you turn them on.

Unlike Suzuki Mehran and the new Alto, Pearl’s interior looks more premium with a silver/wooden accent (depends on your choice) on the doors and on the dashboard. This is similar to the Bravo which also features a wooden accent. 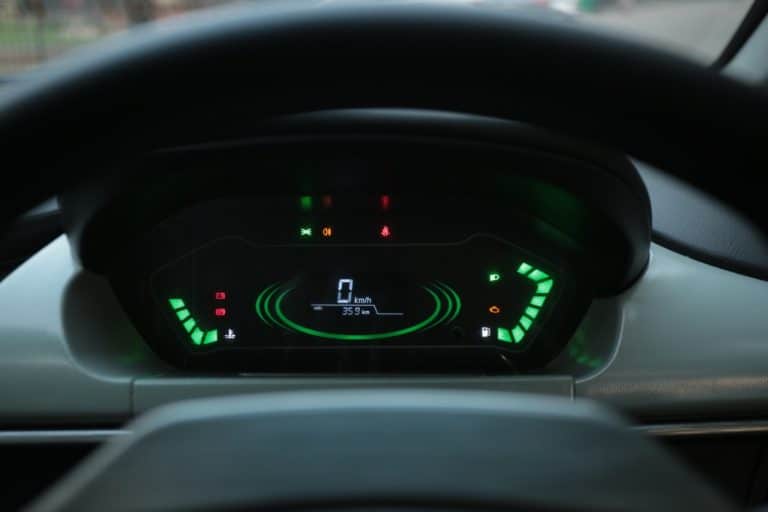 It boasts standard features like an infotainment system that supports USB/AUX and it is important to point out that it has a digital instrument cluster (shown above) meaning it is already better than the car it is replacing. 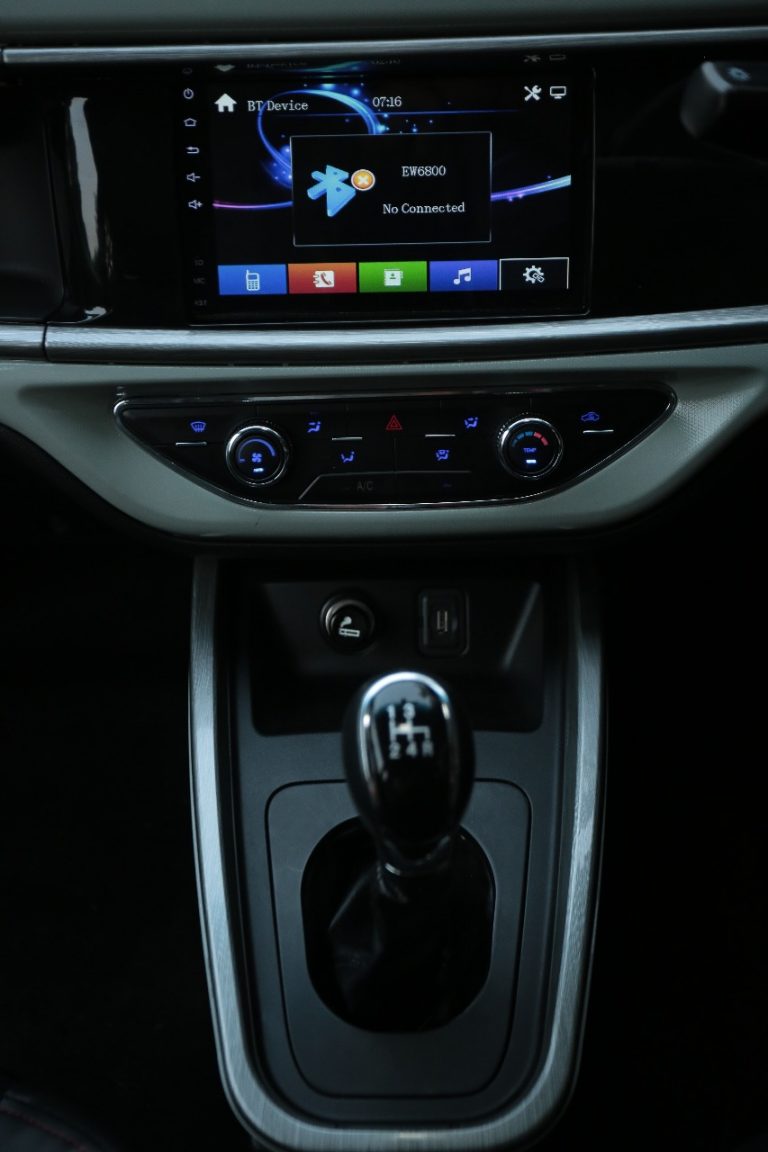 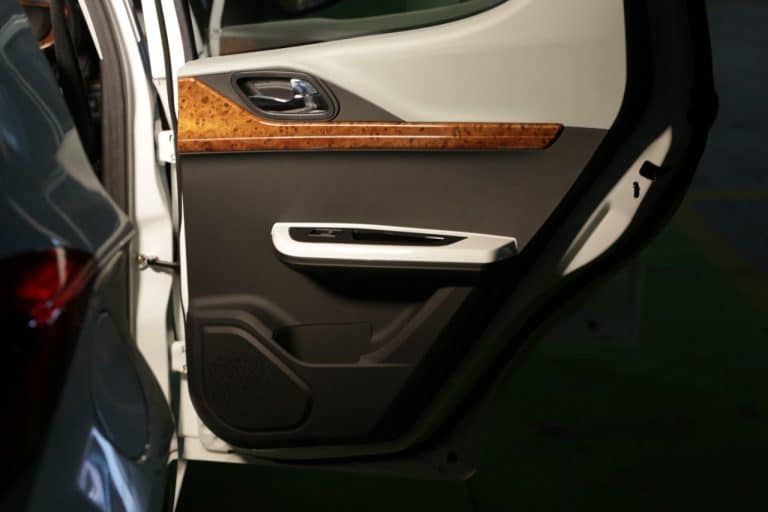 Over on the back, the wooden/silver accent continues with power windows on the back as well (a feature that’s missing on Suzuki WagonR’s base model) and a storage compartment. 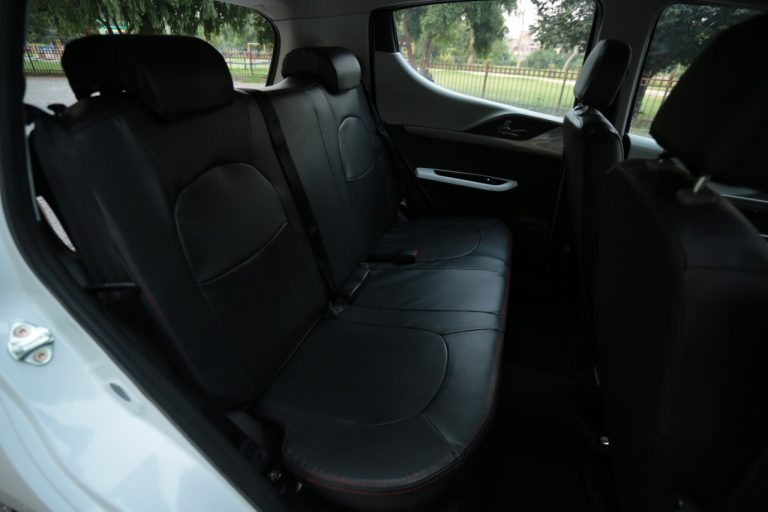 The rear seats both feature headrests and seat belts. Legroom seems to be sparse though. 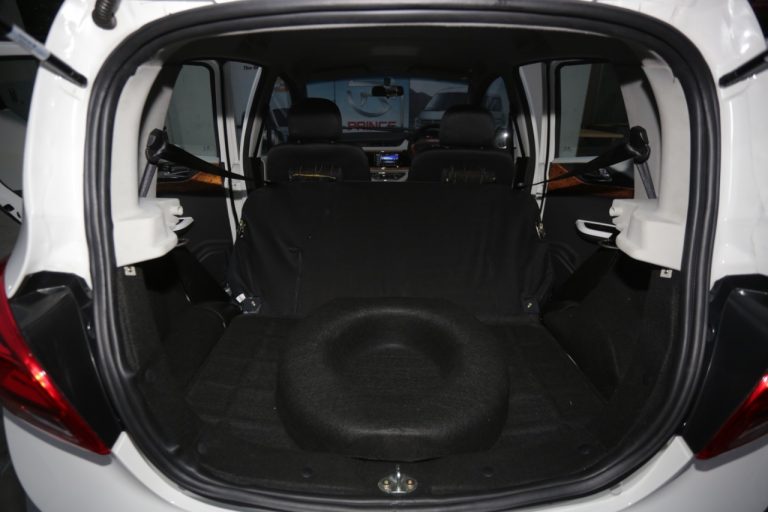 Unlike United Bravo, Prince Pearl does come with a spare tire but the placement seems odd as the company could’ve hidden it under a plastic base to give it an even look. Still, it seems to have ample trunk space for its size. 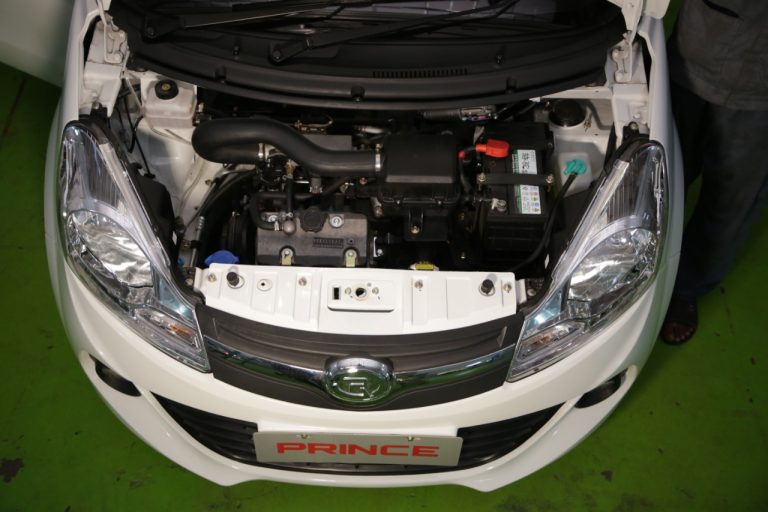 The Pearl is powered by a water-cooled 796CC EFI engine with an overhead camshaft coupled with a manual four gear transmission. It is pertinent to point out that the Price Pearl will be getting an automatic variant too, however, it will be launched later.

These features will be standard in Pearl and you won’t have to pay an additional price for them (unlike most other base model cars in Pakistan).

Although Pearl will feature airbags, they weren’t mentioned in the car’s official specifications so it’s safe to assume they will be available in the automatic model.

Prince Pearl will cost Rs. 1,049,000 for the manual variant and booking will start from February 1st. Note that the booking price for Pearl is Rs. 350,000 and it will be available in 7 colors including Noble White, Silver, Dark Brown, Rio Tomato, Harvard Blue, Aqua Green, and Beige. Other than that, it will come with a 60,000 KM warranty.

The automatic model will launch later and the company hasn’t revealed its price yet. Stay tuned for more updates on Prince Pearl. 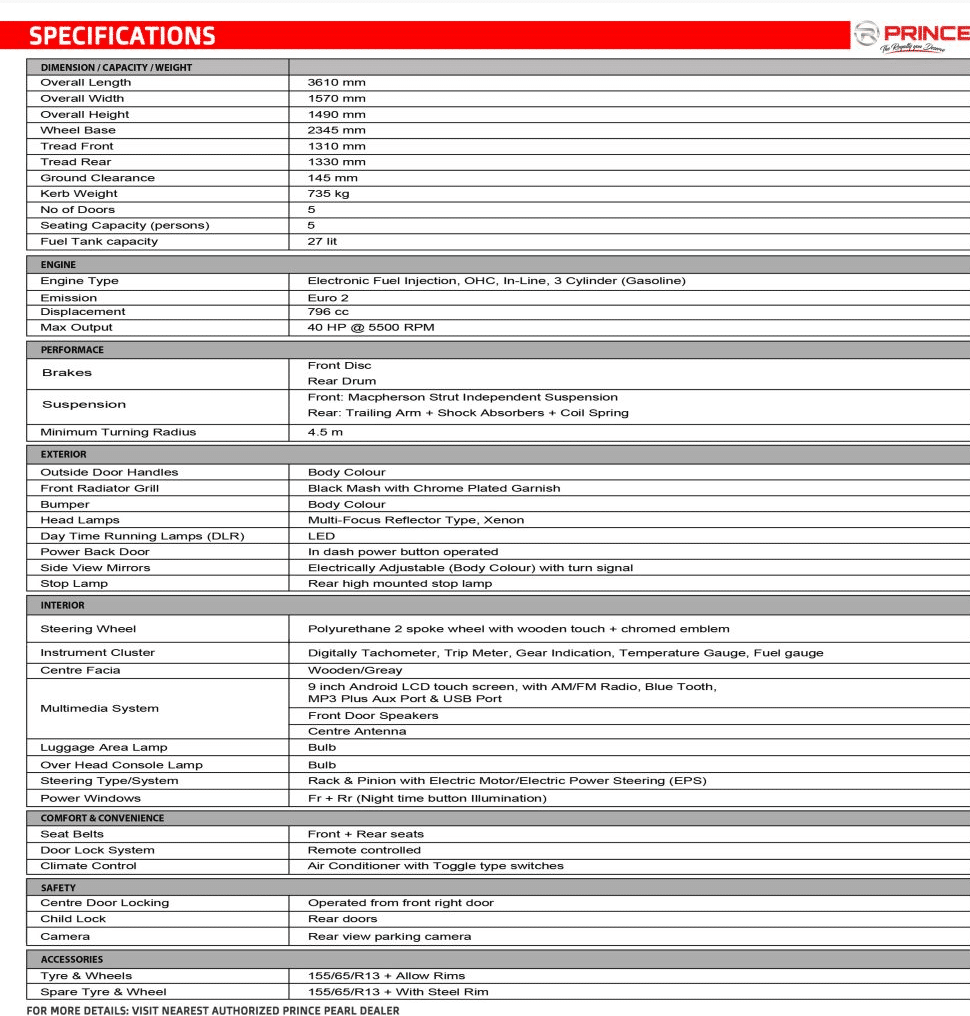