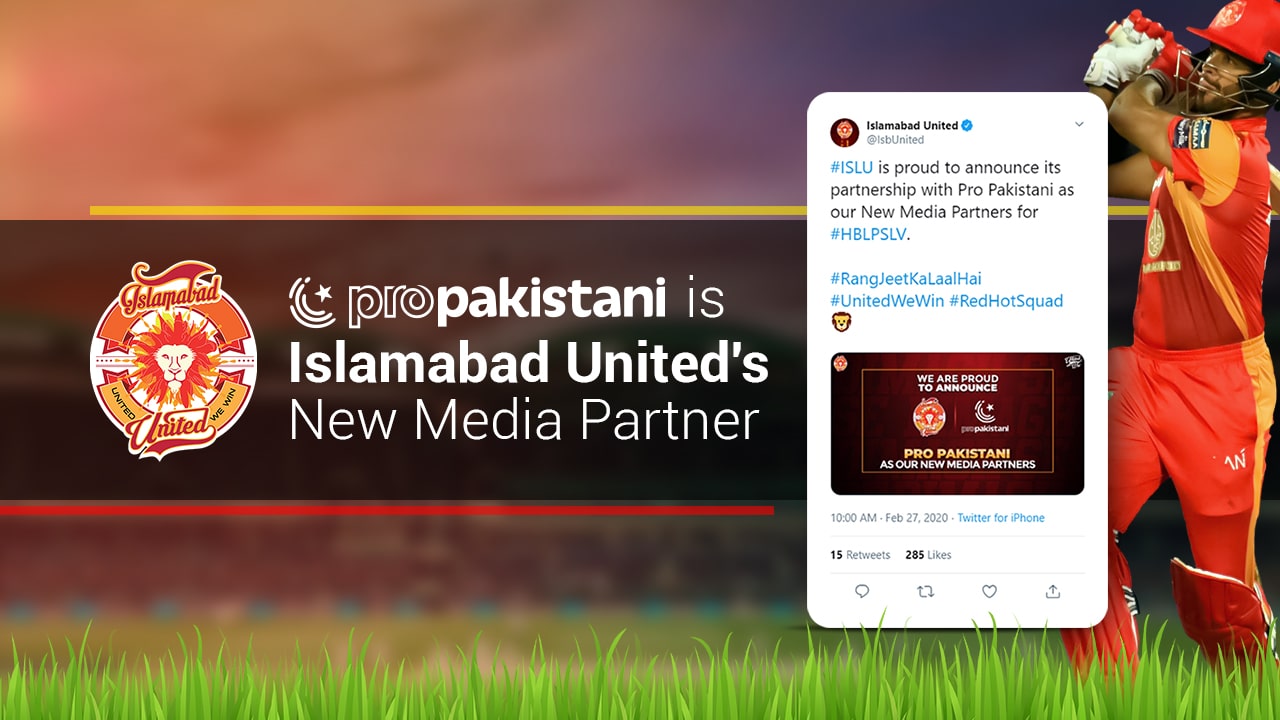 Islamabad United, one of the top teams of the Pakistan Super League (PSL), has announced ProPakistani as its new media partner for the running season of the tournament.

We are excited to become Islamabad United’s media partner and hope the best for the team in particular, and the tournament in general. We are extremely delighted and proud to see the homegrown series happening locally in its entirety. This is a true renaissance of international cricket in Pakistan and we couldn’t be happier to be a direct part of this positive development.

Our sports team has been doing stellar work over the last couple of years and we are absolutely delighted that it’s now being recognized by our very own city’s team! We wish the best of luck to Islamabad United and will be using this opportunity to supercharge our coverage for the 2020 edition of the PSL.

Also sharing his thoughts on the partnership, Ali Naqvi, the owner of Islamabad United, said:

We are excited to join hands with ProPakistani as our ‘New Media’ partner. We know that in today’s increasingly digital world, ProPakistani is one of the foremost portals keeping the Pakistani audience updated on the latest developments happening on all fronts, including sports, which makes this partnership an obvious one for us. Islamabad United focuses on implementing a strategy built around its principle of 4 Es – Excellence, Empowerment, Education, and Environment. And within those parameters, this is a natural partnership for us. We are confident that the partnership will be a long and fruitful one for both parties.

The fifth season of the wildly popular homegrown cricket league kicked off on Feb 20 in Karachi and is underway in full swing. As of today, Islamabad United stands at the top alongside Multan Sultans and Quetta Gladiators with 4 points each.

Islamabad United are the most successful franchises so far in the Pakistan Super League, winning the inaugural title in 2015 followed by another one in 2018.

ProPakistani will be having in-depth interviews and analyses on multiple facets of Islamabad United and what has propelled them to this level of success.

From understanding the analytical approach dubbed as ‘moneyball’, to getting insights into the need for continuity with such senior players as Misbah-Ul-Haq and Mohammad Sami, the interviews and analyses will intrigue readers and provide answers to most of their questions.

Today, Islamabad United is prepared for a showdown with Quetta Gladiators at Pindi Cricket Stadium. ProPakistani is keeping the audience up-to-date with live PSL scores and updates on a special PSL section on its website.

ProPakistani has also announced that it will be giving away Islamabad United merchandise on its YouTube channel to top fans and subscribers. You can also become one of the lucky winners simply by subscribing the channel and staying tuned for updates.