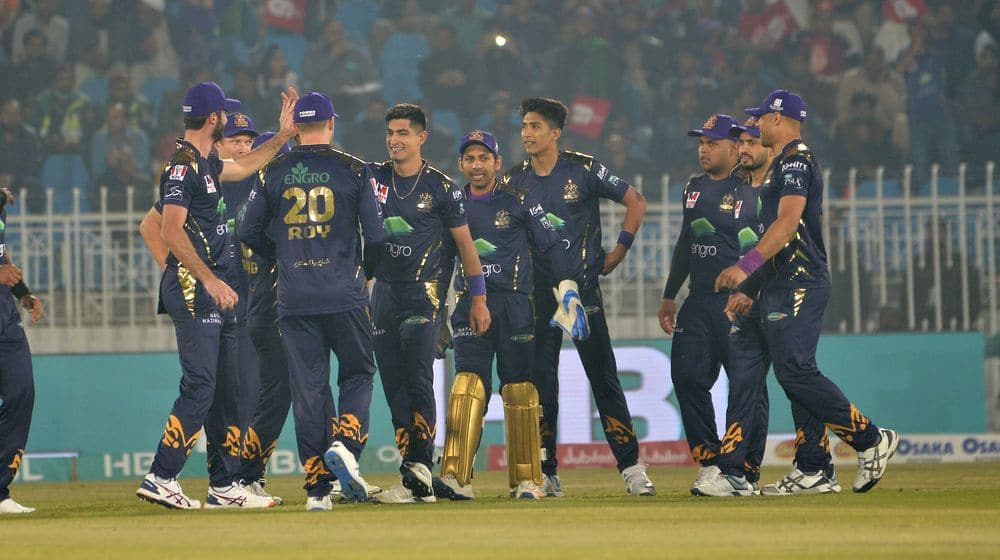 Quetta Gladiators won the toss and elected to field first in front of a full-house in Rawalpindi.

Naseem Shah was quick to bowl out the opener Luke Ronchi on his very first ball. He disturbed the stumps again in his second over, removing Dawid Malan with a brilliant ball.

Colin Munro looked in sublime form as he hit some amazing strokes for his 20-ball-31. Shadab Khan, who promoted himself up the order, was impressive as well, scoring 39 from 25 balls.

Despite wickets falling at regular intervals, the United batsmen kept the flow of runs going as Colin Ingram stayed till the end to help his team post a competitive total on the board. He finished with 63* from 40 balls as United managed to post 187/7 in their 20 overs.

Quetta Gladiators’ openers, Jason Roy and Shane Watson added 41 for the first wicket before Watson holed out to long leg off the last ball of 5th over.

Ahmed Shehzad walked out to bat with intent as he smacked two beautifully timed sixes off the bowling of Shadab Khan before getting himself stumped in the same over.

Roy’s second half-century of the season and Sarfaraz Ahmed’s smart strokeplay kept Quetta in the hunt, however, their wickets made things tough for the team. In the end, it was Ben Cutting who kept his nerve and finished things off in style for the Gladiators. For his 42 runs from just 17 balls, the Australian all-rounder got the man of the match award as his team romped to victory by 5 wickets.

Quetta’s 3rd win has now taken them to the top of the table with 6 points.

After a full-house at Multan Cricket Stadium, Rawalpindi fans will also be eager to show their love for the game. This will be the first Pakistan Super League (PSL) fixture at Rawalpindi and if we judge by the fans’ response during the international games, it will be a jam-packed stadium today.

Both Islamabad United and Quetta Gladiators are evenly poised at 2nd and 3rd spot respectively and a win will take either team to the top of the points table.

The two teams have locked horns 10 times with Quetta Gladiators winning 6 and Islamabad United 4. Both are evenly matched teams and fans can hope for another thriller tonight.

Both Islamabad United and Quetta Gladiators have won their previous encounters, therefore, not many changes are expected in the playing XIs.

Islamabad United:
Dawid Malan has been highly successful in the PSL, and he is among the top run-getters this year as well. He will definitely be the key for United.

Quetta Gladiators:
Shane Watson is yet to fire for the Gladiators this season. He is a class act and it is only a matter of time before he delivers a match-winning performance.