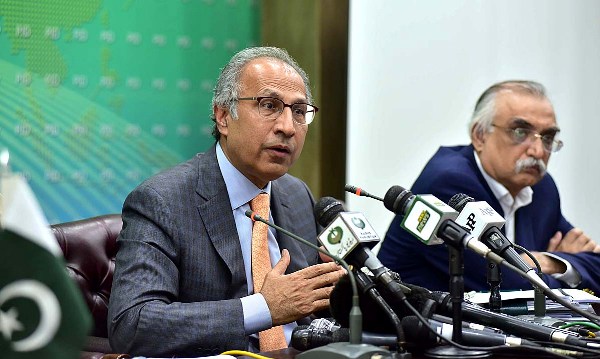 The government has approached the International Monetary Fund (IMF) for an additional fund worth $1.4 billion while the World Bank (WB) has agreed to provide $1 billion to Pakistan to fight coronavirus outbreak.

This was stated by Adviser to Prime Minister on Finance Abdul Hafeez Shaikh while unveiling the emergency economic plan finalized by the federal government amid the crisis.

Shaikh, while addressing a press conference was afraid of a bigger impact on the national economy due to the spread of coronavirus pandemic that has also disturbed economic activities including exports and remittances.

“This sum of additional money is separate from the current program,” Shaikh said, referring to the ongoing three-year IMF Extended Fund Facility (EFF) worth $6 billion. “Pakistan’s economy was growing stronger but the COVID-19 pandemic will hurt it considerably,” he added.

Remittances are likely to fall, as well as tax collection, and a slowdown in the economic activity throughout the country is imminent, the adviser said in the press conference.

Our economy was heading towards stability and exports were rising which reduced the current account deficit to $3 billion from $20 billion. The country had paid foreign loans worth $4 billion while the country’s efforts were being appreciated for economic revival. Pakistan’s revenue collections were historical in the last eight months and it was increased up to 17 percent as compared to the previous year. However, the economy is likely to suffer an impact due to the spread of coronavirus pandemic just like it is producing a major financial loss to other countries around the world. We have dispatched additional funds to the province and more funds are given to the provinces under NFC. The Centre and provinces are moving forward with full coordination. The federal government has allocated Rs. 200 billion for laborers and daily wage workers. This amount will be given by the Centre while provinces will also add shares into the funds.

“Prime Minister Imran Khan approved a relief package worth Rs. 1.25 trillion. The authorities will make tax refunds to the export sector up to Rs. 100 billion, whereas, Rs. 100 billion apportioned for agriculture and SME. We will provide subsidized products after cutting the prices of urea. SMEs will be given more time for the payments of interest and dues.” said Shaikh.

“The state authorities will provide financial aid to 12 million families and deserving families will be given Rs. 3000 per month for the next four months. Rs. 50 billion will be spent on subsidy for daily use commodities like pulses, rice, oil and sugar and others in utility stores.Rs. 280 billion is allocated for the purchase of 82 lakh tons of wheat from farmers. The interest rate was also reduced to 12.25 percent during the last days. The government will immediately cut prices of petroleum products up to Rs. 15 per liter, whereas, nationals will be given a facility to pay electricity and gas bills in installments of three months,” said the finance adviser.

Taxes will be ended on many food items and a reduction will be made on some other products. Rs. 25 billion will be spent on purchases of vaccines and necessary equipment for NDMA [National Disaster Management Authority]. Pakistan is likely to get $350 billion financial assistance from Asian Development Bank (ADB). The government will expedite the PSDP [Public Sector Development Programme] and end CVT in the capital market. Moreover, the World Bank agreed to provide $1 billion to Pakistan to fight coronavirus. We have also contacted the IMF for providing an additional fund worth $1.4 billion and still in talks with ADB. At this time, the government is engaged in fast track dialogues with the IMF mission. The concerned authorities will start refunds to exporters from the current month and the subsidy of Rs. 200 billion will be expanded to the lower level. We are finalizing a procedure which will be unveiled soon.

Special Assistant to Prime Minister on Petroleum Nadeem Babar said they will review responses after modifying prices of the petroleum products. He added that a related forum will finalize all matters, whereas, the petroleum-related developments will also be discussed in the Economic Coordination Committee (ECC). He continued,

We will definitely face problems each day but it will be resolved at earliest. Yesterday, the staff members of the Liquefied Natural Gas (LNG) terminal were stopped from duties in Karachi. However, the matter was immediately resolved after contacting the Sindh government. We have issued passes to the staffers of the LNG terminal. Meanwhile, we are also resolving issues being faced by transporters in Gilgit-Baltistan (GB).

Commerce Advisor Abdul Razak Dawood said the decisions will be further elaborated in the next session of the National Coordination Committee (NCC) summoned on Thursday. He added that the government has made decisions in view of difficulties being faced by the industries.

Federal Minister for Economic Affairs Hammad Azhar elaborated that Pakistan received $600 million financial assistance from ADB and WB, whereas, the funds from different projects will also be dispatched at a fast pace.

Hammad Azhar said the authorities are utilizing all available resources to reduce the impact of coronavirus and the government will also move to different institutions for a budget support package.