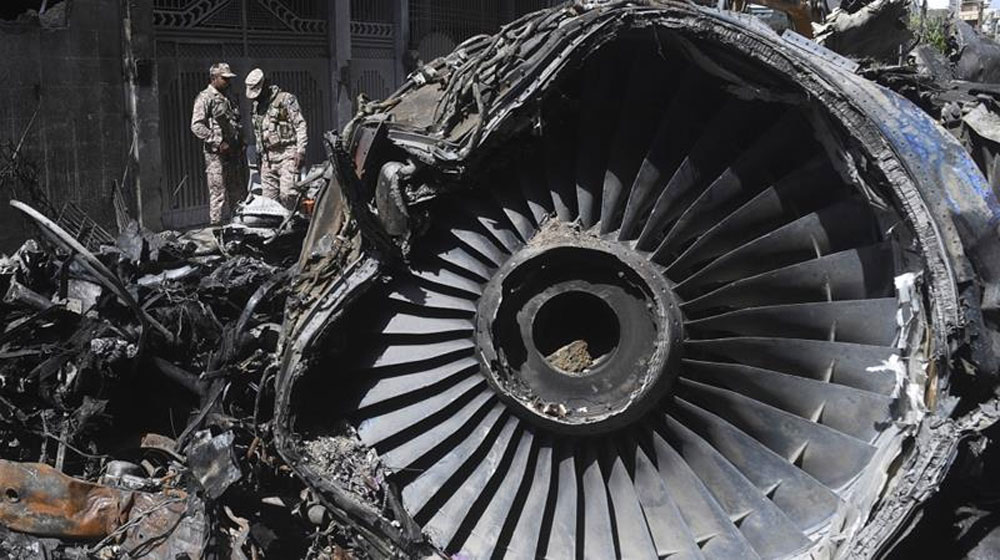 The cockpit voice recorder of the ill-fated Pakistan International Airlines (PIA) flight PK-8303 has been found from the crash. The plane that crashed on May 22 in Karachi just a few kilometers from the airport, martyred at least 97 people including all crew members. Three passengers, however, saved during the fatal plane crash.

The ill-fated aircraft had reportedly developed a technical fault before the accident. Initial investigations carried out by the Aviation Department revealed that the landing gear of the plane did not open when the pilot first tried to land.

Subsequently, the aircraft leaned on its bottom during the botched landing attempt, dragging both engines on the runway. Before the pilot could attempt a second landing, both engines had caught fire, and as a result, the plane crashed in a residential area near the airport.

On Tuesday, a team of Airbus experts landed in Pakistan for detailed investigations of the accident. They collaborated with local teams to find out the causes of the crash. So far, the team of French experts has made several visits to the crash site and collected the necessary data.

PIA is Getting an Advanced Flight Control System from Turkey

The cockpit recorder was, however, missing until today. The aviation investigation team believes that the locals, who arrived at the site soon after the crash might have taken away some debris of the plane. Several announcements were made in the area with Rangers and Aviation officers urging locals to hand over the wreckage of the crashed jet, all in vain.

The 11-member investigation team accompanied by a flight safety team of PIA continued the search on the third day. They used camera drones and other gadgets during the search, and after several hours, the cockpit recording was finally recovered from the rubble in the residential area where the plane crashed. The recorder has been handed over to investigation teams.

The equipment carries details of the conversation between the pilot and the control tower. It will help investigators understand what exactly happened in the moments preceding the crash. In the next step, the team of French experts will use forensics to further the investigations.

Federal Minister for Aviation, Ghulam Sarwar has announced to release the initial inquiry report in the plane crash incident by June 22.

He addressed a press conference in Islamabad today, saying that the plane crash was a tragic incident in the country’s aviation history.

The minister also announced on behalf of the federal government to provide Rs. 1 million each to the families of the victims as well as funds for the reconstruction of the damaged houses.