Recently, we witnessed a petrol shortage as Oil Marketing Companies (OMCs) closed fuel pumps across Pakistan due to shortage of supply.

Apparently, the government is at fault.

The situation started worsening in late April and remains unresolved till date.

OGRA, in a statement issued to media, said that OMCs are responsible for creating the shortage and that the authority has proof. It further said that six OMCs were issued show-cause notices while another two were being investigated for hoarding petroleum products and will be charged as per the law.

After digging deep into the situation, it appears that OMCs were not at fault. Instead, fuel shortage was due to bad estimations from the government’s end.

While there are a lot of technicalities involved, in a layman’s terms, the government of Pakistan capped OMCs to cancel their import orders on March 25, 2020.

According to a letter, posted below, the move was apparently due to lower demand amid Coronavirus lock-downs.

OMCs were instructed to get their fuel from local refineries as low demand (and after import) these local (mainly govt owned) refineries would be out of orders. 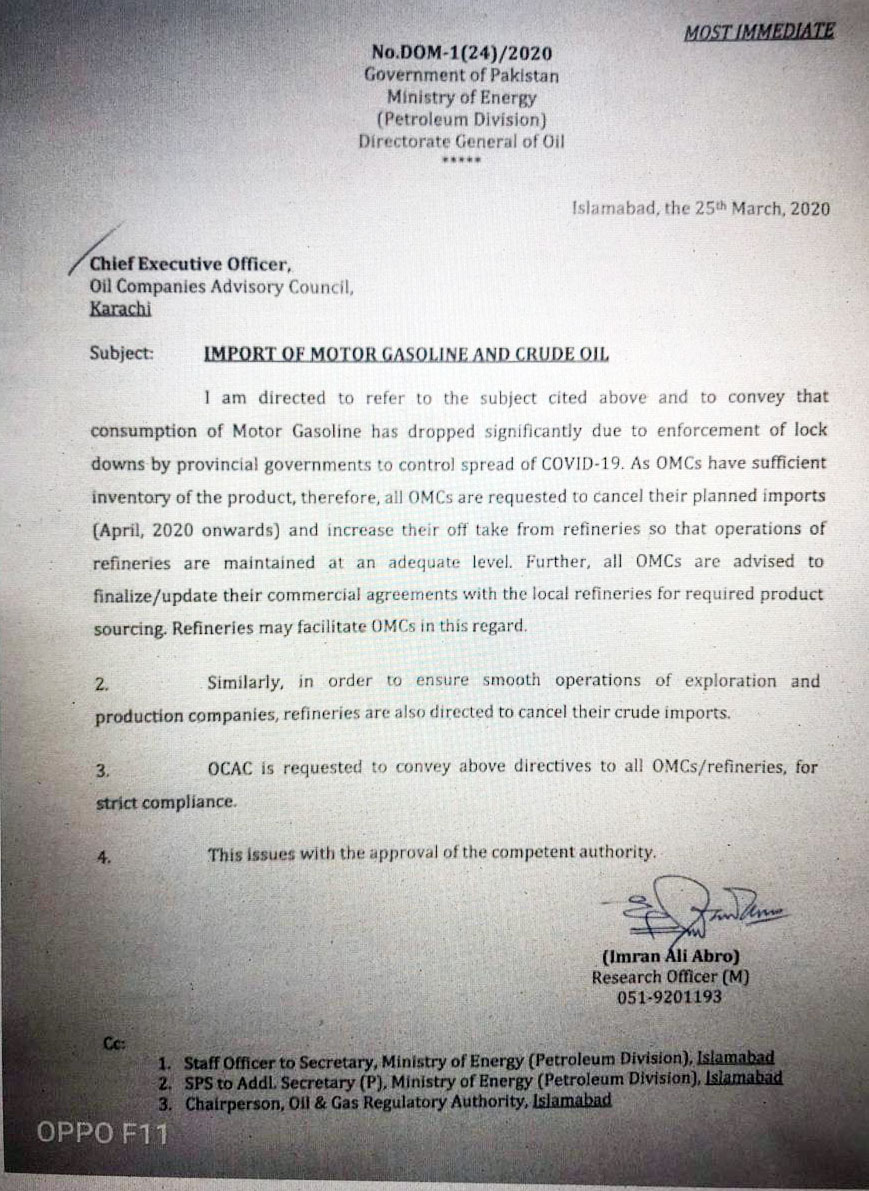 After the above directions, in which OGRA is copied, oil marketing companies canceled their import orders and decided to rely on local refineries to meet demand.

According to details available with ProPakistani, Shell Pakistan on 20th Feb, 2020 signed an import order for 55,000 Metric Tonnes (MT) per month of 92 RON Motor Gasoline (Mogas) to be delivered in March, April and May 2020.

After the above order, which directed OMCs to cancel planned imports from April 2020 onward, Shell Pakistan canceled the order, taking out approximately 83,000 MT of fuel from the system which would have otherwise been available at the beginning of June.

The situation changed and petroleum demand increased in the country in April. At this time, OMCs were supposed to rely on local refineries, which cut short their output due to price differential of crude oil.

Due to the above reasons, petrol was short in the country by the end of April and as per our sources, oil marketing companies were consistently communicating their inventory details with the OGRA and Ministry of Energy.

In fact, in one communication, OMCs clearly communicated to the ministry that their inventory would dry up in less than 8 days.

In May 2020, the government lifted the ban on import of fuel for OMCs and that’s when they placed fresh orders. Not to mention, oil tankers take a lot of time to reach Pakistan after orders are placed.

Shell Pakistan, for instance, placed an order during the second week of May and the tanker reached Pakistan on June 8th, 2020. As of now, the tanker is being off-loaded and fuel from it will be supplied across the country.

Clearly the situation was created due to bad estimation of the government — as they thought demand would shrink due to Coronavirus lock-downs. However, lock-downs were lifted and the demand surged.

While it can be said that the situation was uncertain enough and estimates can be wrong, the real culprit behind fuel shortage were clearly not the OMCs.