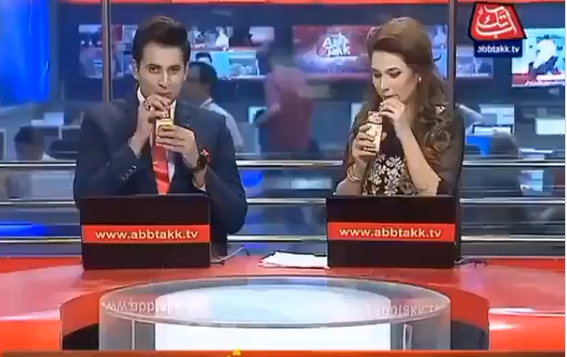 Commercialization of the news media in Pakistan or elsewhere in the world doesn’t surprise us anymore; after all, that’s the cost of free news. We also know that product promotions have a way of finding their place in the most packed of TV programming.

But we were surely caught off-guard by a new and very unusual development that’s making many people say that journalism is dead in Pakistan.

Two news anchors on a Pakistani news channel AbbTakk left the audience dumbfounded when they promoted a juice brand on-air, shockingly enough, as part of the news segment. Welcoming back the news viewers after a commercial break, the anchor duo is seen oddly sipping on a popular brand’s juice and promoting its new offers.

The 35-second promotion is the country’s first instance of ad placement occurring inside a news segment, leaving viewers utterly confounded. Reporters, in particular, were left appalled by this novel advertising gimmick.

A reporter named Shazia Hasan tweeted the clip and wrote: “Is this for real? Or someone’s idea of a […] joke? Well, ok I never saw news anchors as genuine journalists but selling juice during a news bulletin? This is insane! #news #anchors #journalism #JournalismIsDead #marketing #juice #Advertising #Pakistan”

Is this for real? Or someone's idea of a stupid joke? Well, ok I never saw news anchors as genuine journalists but selling juice during a news bulletin?!! This is insane!!! #news #anchors #journalism #JournalismIsDead #marketing #juice #Advertising #Pakistan pic.twitter.com/9eESpm13im

While it was plainly in bad taste that most of the viewers abhorred, the ad placement is also being hailed as ‘innovative’ by some.

Among them is a twitter user Asad Qureshi who thought it was a unique way of advertising and wrote this in his reply to Shazia’s tweet: “What’s the big deal here @Nestle is paying @AbbTakk for this advertising and they are getting peak visibility during news hour. Some cynics always find faults with innovation!”

What's the big deal here @Nestle is paying @AbbTakk for this advertising and they are getting peak visibility during new hour. Some cynics always find faults with innovation!

We’re all used to seeing creepy ad placements in our news programming. Apart from the formal commercial breaks, there are countless promotional graphics dancing constantly on the screen during talk shows and news bulletins.

Then, there’s this bizarre trend of some unannounced ads showing up after the 15-minute headlines in a news bulletin, followed by the anchors returning only to say they’ll be back after a short commercial break.

It’s unfortunate, however, that the public displeasure is directed at the news anchors in the case of AbbTakk, who certainly have had no choice over the stunt. These anchors hardly have any say in such editorial decisions and can only comply if they want to keep their jobs.

But people seeing red and clamoring ‘journalism is dead’ over this totally ill-designed and uncalled-for kind of advertising is not totally unjustified.

It’s one of the sorry events for both the news and the ad industries of Pakistan that we wish to never become a trend.