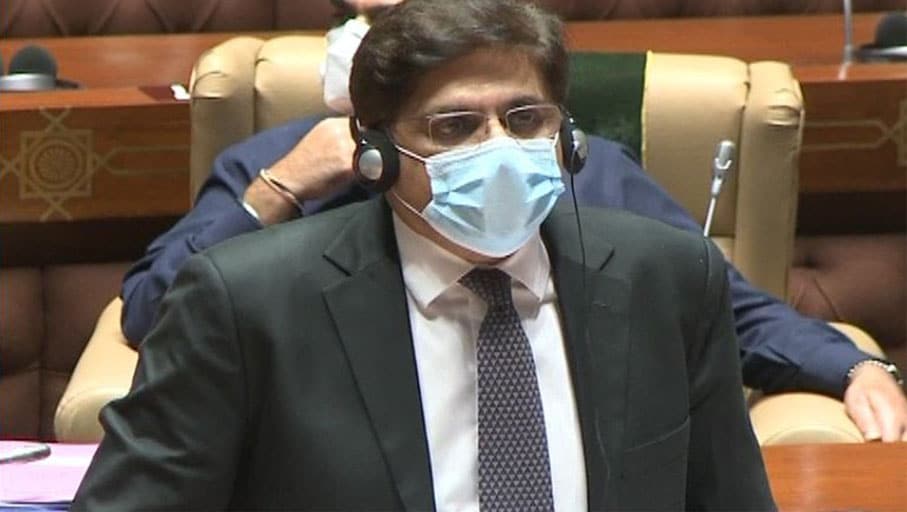 Sindh Chief Minister Syed Murad Ali Shah, who also holds the charge of the finance ministry, presented a Rs. 1.241 trillion budget with a deficit of Rs. 18.38 billion for the financial year 2020-21 in the provincial assembly on Wednesday.

The chief minister said that no new tax had been introduced in the budget for 2020-21 and the increase in non-development expenditure was restricted to seven percent only.

The government announced a 10% raise across the board in the salary of government employees up to grade 16 and a 5% increase in the salaries of officials above grade 17.

The chief minister said the increase in non-development expenditure was mainly due to the provision of COVID-19 related pro-poor “Social Protection and Economic Sustainability” package of Rs. 34.2 billion, an increase of Rs. 19 billion in the health sector and Rs. 22.9 billion in the education sector from the current year’s budget allocations.

The minister said that agriculture contributed 24 percent to the GDP. “Sindh’s contribution to national production is 36 percent in rice, 29 percent in sugarcane, 34 percent in cotton and 15 percent in wheat,” he said, adding that the agriculture budget was increased to Rs. 14.84 billion. He said there was an imminent threat of food insecurity due to locust attacks, which were not only destroying crops but also putting the economy at stake.

He said the health department budget was raised by 16.1% to Rs. 139.18 billion to boost efforts against the COVID-19 pandemic and infectious diseases. He said health risk allowance, at the rate of one basic pay with effect from March 2020, would be provided to all health professionals, including postgraduate and house job officers engaged in treating COVID-19 cases.

The education department’s budget was also augmented by 10.2% to Rs. 244.5 billion for quality education and to cope with the post-pandemic academic challenges.

According to Murad Ali Shah, this year’s overall federal receipts have been reduced by Rs. 71.72 billion or nine percent as compared to the current financial year 2019-20.

Due to low inflows from the federal government, the Sindh government has reduced its Annual Development Plan (ADP) to Rs. 232.9 billion for FY21, allocating Rs. 155 billion to the provincial development and Rs. 15 billion to schemes.

In ADP, the education sector got Rs. 21.1 billion for 397 ongoing schemes and 11 new but unapproved schemes. An allotment of Rs. 3.1 billion has been provided under foreign project assistance (FPA) in addition to the provincial development budget resource allocation.

The provincial government also expects Rs. 54.6 billion from Foreign Project Assistance and Rs. 8.3 billion from the Federal PSDP for 10 schemes under execution by the Sindh administration.