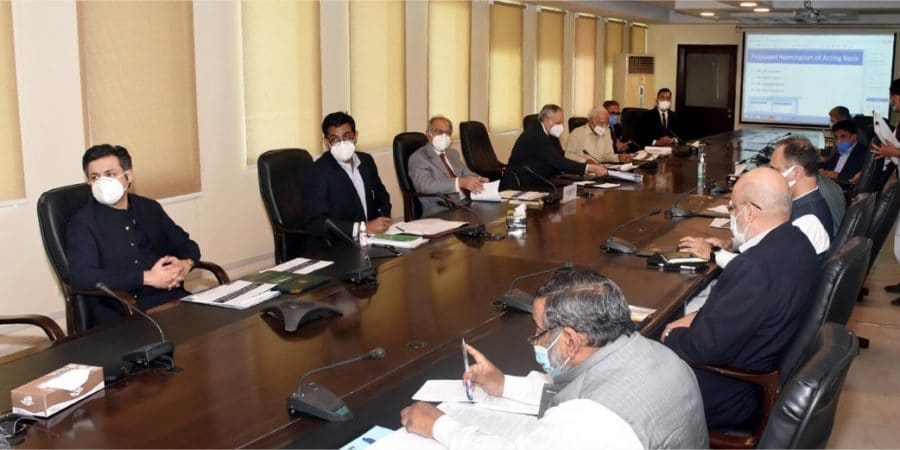 The meeting was chaired by Adviser to the Prime Minister on Finance and Revenue Dr. Abdul Hafeez Shaikh, who decided to set up a sub-committee headed by Minister for Industries and Production Muhammad Hammad Azhar to study the status and implementation of the recommendations of Task Force on Austerity and Government Restructuring Report on restructuring and reorganization of the federal government.

Earlier, the committee was informed by the Ministry of Finance that around 85 commercial state-owned enterprises are working under the administrative control of 19 federal ministries/divisions but the overall performance of the state-owned enterprises had remained unsatisfactory despite considerable financial support by the federal government from time to time.

The meeting was told that during FY 2017-18 an amount of Rs. 143 billion was provided to various state-owned enterprises as subsidies, Rs. 204 billion as cash development loan, Rs. 27 billion as equity injection and GoP guarantees amounting to Rs. 318 billion were issued. Despite such large support, the state-owned enterprise sector as a whole registered net losses of Rs. 265 billion.

The Ministry of Finance in its presentation attributed the poor performance of the state-owned enterprises to various factors, particularly redundancies and duplications, a completely decentralized governance framework with lack of inter-agency coordination, excessive interference and over-regulation by multiple government agencies and lack of technical expertise and specialized skills in the line ministries for the management of commercial state-owned enterprises.

The Ministry of Finance also briefed the committee on various steps taken for reforms and improvement in the state-owned enterprise governance framework, including Sarmaya-i-Pakistan and structural benchmarks agreed with the international financial institutions. It further updated the members of the Committee about the legal framework being developed for the liquidation, privatization, and retention under the government ownership on the basis of economic rationale and financial performance of state-owned enterprises.

Advisor to the Prime Minister on Institutional Reforms and Austerity Dr. Ishrat Hussain briefed the meeting on the gist of proposals of the Task Force on Austerity and Government Restructuring Report on restructuring and reorganization of the federal government.

He opined that the Task Force’s proposals, which had already been approved by the federal cabinet and were being implemented at different levels by the federal government, could be a starting point for the CCoSOEs to see and decide which state-owned enterprises were to be privatized, liquidated, wound up or closed down and which are to be reorganized and retained by the government or merged with other entities.

The meeting appreciated the work done by Dr. Ishrat Hussain and his team and decided to constitute a team led by Minister for Industries and Production Muhammad Hammad Azhar to study the status and implementation of the recommendations of Task Force on Austerity and Government Restructuring Report on restructuring and reorganization of the federal government and report to the committee in its next meeting.

The Committee headed by Muhammad Hammad Azhar would include representation from the Finance Division, Privatisation Commission and the office of the Advisor to the Prime Minister on Institutional Reforms and Austerity