Pakistan’s circular debt in the power sector can inflate up to Rs. 4.0 trillion in 2025, it currently stands at Rs. 2.21 trillion.

This was revealed by a study titled “Fixing Pakistan’s Power Sector” prepared by Engro Corporation, a multinational conglomerate with subsidiaries involved in the production of fertilizers, foods, chemicals, energy, and petrochemicals.

The report highlighted that if distribution companies’ (DISCOs) operations are not improved, the inefficiencies will add a further Rs. 1.5 trillion to the circular debt by 2025, which could increase to Rs. 4 trillion. 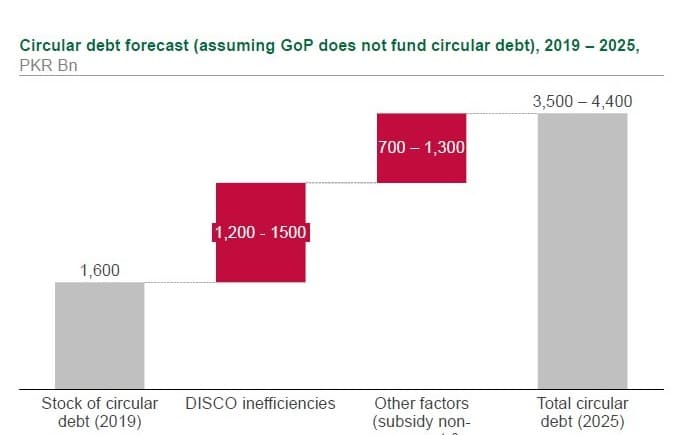 The study has highlighted five challenges in Pakistan’s power sector, which include:

The report has highlighted the solutions to said issues as well. However, it points out that circular debt grows because of certain root causes, the most critical of which is DISCOs’ inefficiencies, which contributes 60% to the circular debt. 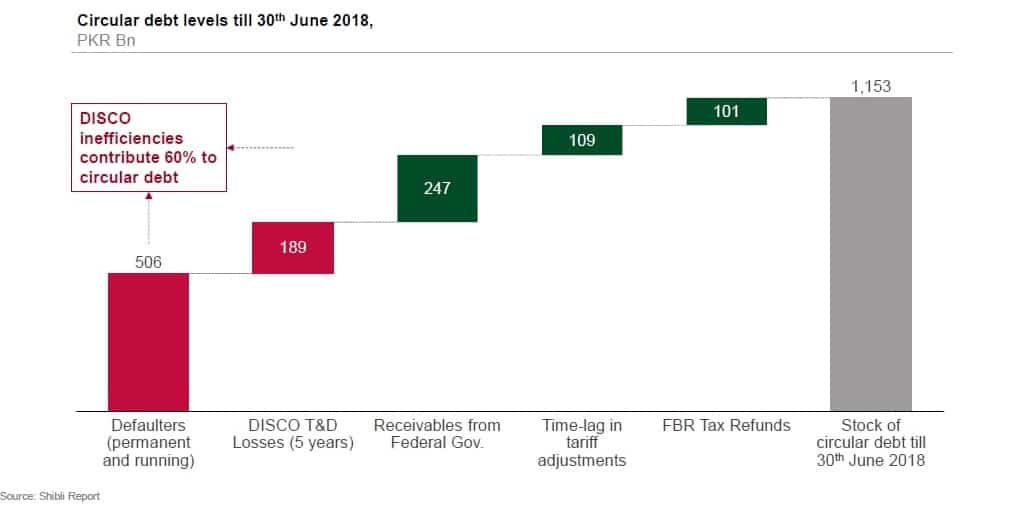 The study says that the government is heavily involved in the power sector starting from the provision of fuel, electric power generation, transmitting electricity up to purchasing it, and then distributing it to the end censurers.

The report stated that the power tariff in 2025 will surge by Rs. 5.1 per unit, driven mostly by the CPP (Capacity Purchase Price). 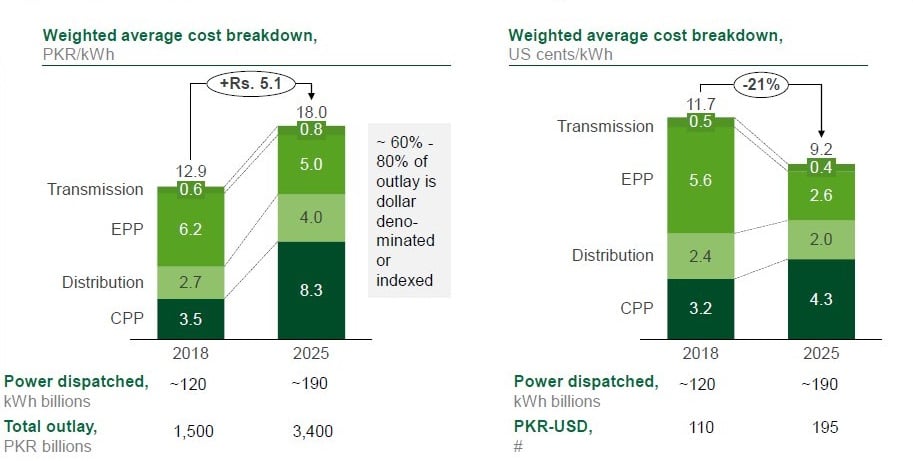 It further highlighted that in dollar terms, the tariffs will fall by 21%.

Electricity prices in Pakistan higher as compared to different countries

According to the report, electricity prices in Pakistan are the highest if compared to benchmark countries such as Vietnam, Sri Lanka, Bangladesh, India, Malaysia, Thailand, and South Korea. It said: 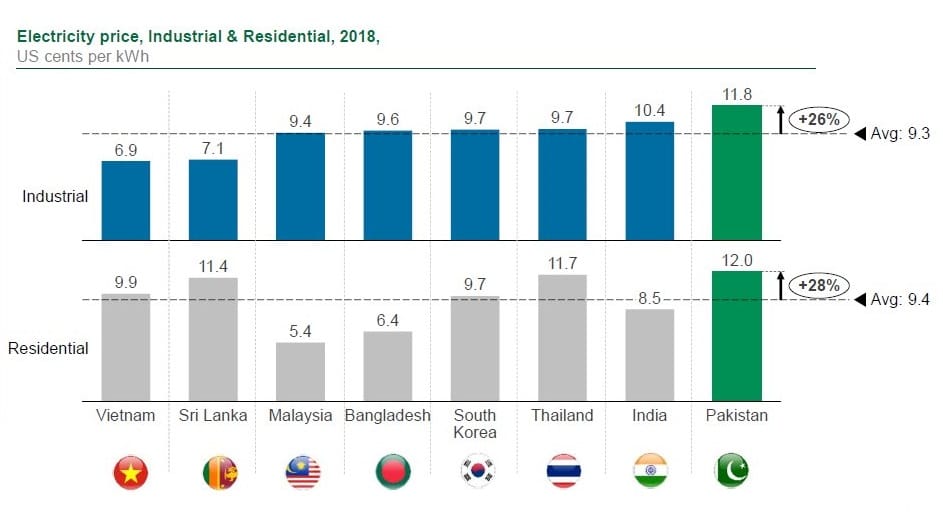 In QESCO, 75% of electricity demand is from agriculture customers, most of which do not pay their bills. PESCO’s defaults result from poor law and order, and lack of support from the provincial government. 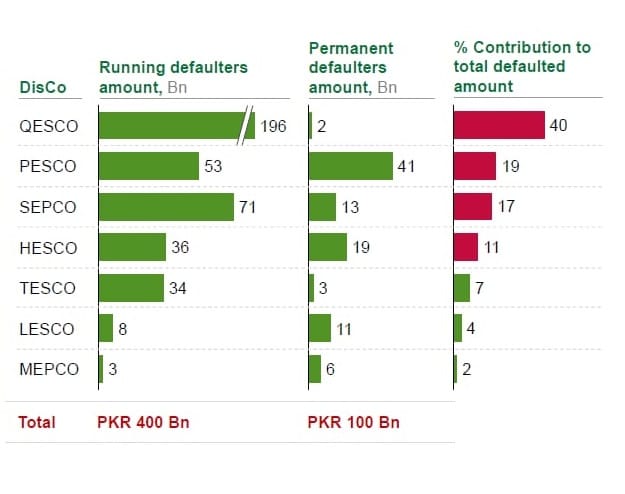 SEPCO receivables largely stem from the non-payment of the private sector. The receivables are growing by Rs. 8-10 billion per annum.

The study warns decision-making authorities of the country saying that capacity payments will be hovering in the range of Rs. 1,500 to 1,700 billion by 2025.

It recommends the re-structuring of IPP debt and moving to competitive bidding for future projects. It asks for restructuring IPP debt from 10 to 20 years with negotiation for the reduction of IPP interest rates. It also asks authorities to reallocate gas from non-process captive plants to RLNG based IPPs.

The DISCOs were also facing damages of Rs. 189 billion till June 2018 in the heads of transmission and distribution losses, Rs. 109 billion loss in the wake of time-lag in tariff adjustments and Rs. 101 billion on account of non-payment of tax refunds by FBR.

The most critical step to improve circular debt is to improve DISCO operations, which can be done by involving provinces in their ownership and management, said the study. It also recommends that the worst-performing DISCOs should be prioritized for reform on an urgent basis.

It also asks handing over DISCO ownership and management to provinces and provincial governments control law and order, which is a critical requirement for the turnaround of DISCOs.

The report also stated that adequate supply capacity is available until at least 2025. However, for  5 months of the year, electricity demand is 30-40% lower than the annual peak demand. 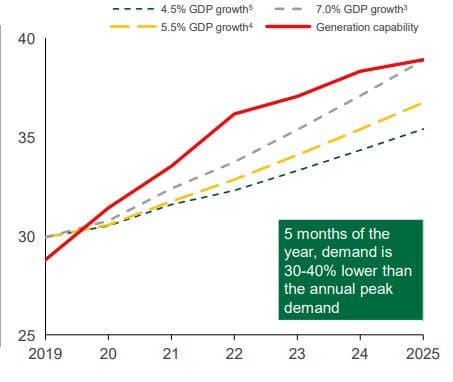 It recommends the Government of Pakistan to create, empower and track the performance of an independent power planner in line with NTDC integrated generation plan and stresses the government not to approve new generation projects above those already committed, as they will increase the burden of CPP (Capacity purchase price) on the power sector.

In the future, power plants should be installed based on the take and pay contracts and the government should move towards a competitive power market, it added.

The report noted that in order to avoid a potentially catastrophic impact on the economy, the government should enact DISCO reforms on a war footing.

It emphasized to reduce the impact of rupee devaluation on power cost, by renegotiating borrowing terms, and by promoting indigenous fuel and renewables. It concluded to build on the momentum from CPEC Phase 1 by working in partnership with IPP investors to catalyze Pakistan’s industrial growth and power demand.