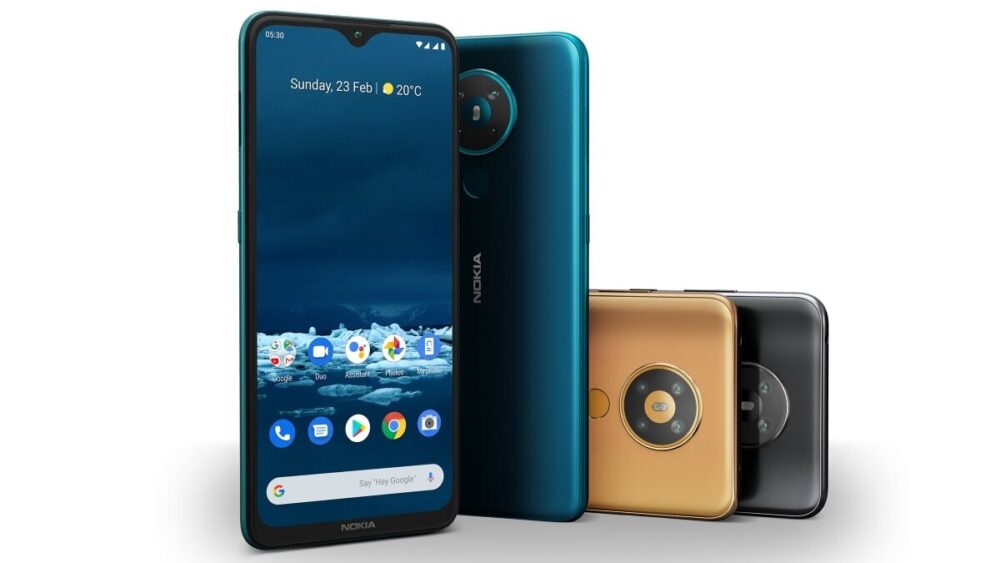 HMD Global has released a handful of new Nokia phones including the Nokia 125 and 150 feature phones as well as the 5.3 mid-ranger that was speculated in previous weeks. Just as expected, Nokia has skipped the 5.2 and has gone directly to 5.3 with a complete design change and, of course, improved specifications.

Nokia Secures a Major Investment From Google, Qualcomm & Others There is now a bigger 6.55-inch LCD with much smaller bezels than before and a waterdrop notch for the front camera. It has HD+ resolution and a tall 20:9 aspect ratio.

The back has four cameras, and they’re arranged in a circular cutout with an LED flash in the middle. The fingerprint sensor is right below the primary camera just above the Nokia branding.

The mid-range Snapdragon 665 SoC powers the internals with up to 6GB RAM and 64GB eMMC storage. The processor has eight cores clocked at 2.0GHz and the GPU is ARM’s Adreno 610. There is a microSD card slot for storage expansion as well.

The software front features stock Android 10, but Nokia promises updates up to Android 12.

The circular quad camera on the back includes a 13MP main sensor with a wide-angle lens, a 5MP ultrawide unit with 120 degrees FOV, a 2MP macro camera, and a 2MP depth sensor. This camera can record 1080p and 4K video clips but they are limited at 30 FPS.

The front camera housed in the waterdrop notch is an 8MP shooter that can record 1080p video clips.

There is no fast charging available on the 4,000 mAh battery, but it should be able to charge in around 2 hours through the USB-C port.

The Nokia 5.3 will be available in Cyan, Sand, and Charcoal color options and will go for sale on September 1 starting at $188.