Smartphone maker Oppo has launched its latest handset called Oppo F17 Pro. The phone was launched during a live game show on TV.

The virtual game show launch was also live-streamed on Oppo’s official Facebook and YouTube at 8 PM. The event also allowed the viewers to win an Oppo F17 Pro and experience the latest technology first-hand.

“F Series has been designed so that the trendsetting generation can attain a quality Smartphone that suits both their life and personal sense of style, and with a sleek design that they won’t be afraid to enjoy outdoors,” said George Long CEO of OPPO Pakistan, AED.

“Designed based on research on consumers in Pakistan, F17 Pro ticks off all the right boxes for a phone that boasts AI cameras to deliver breath-taking portrait photos, and the latest generation of VOOC Flash Charging technology to ensure that your phone won’t hold your lifestyle back. F17 Pro meets the high expectations and the values that our trendsetting and ambitious users hold dearly in both form and style,” George Long added. 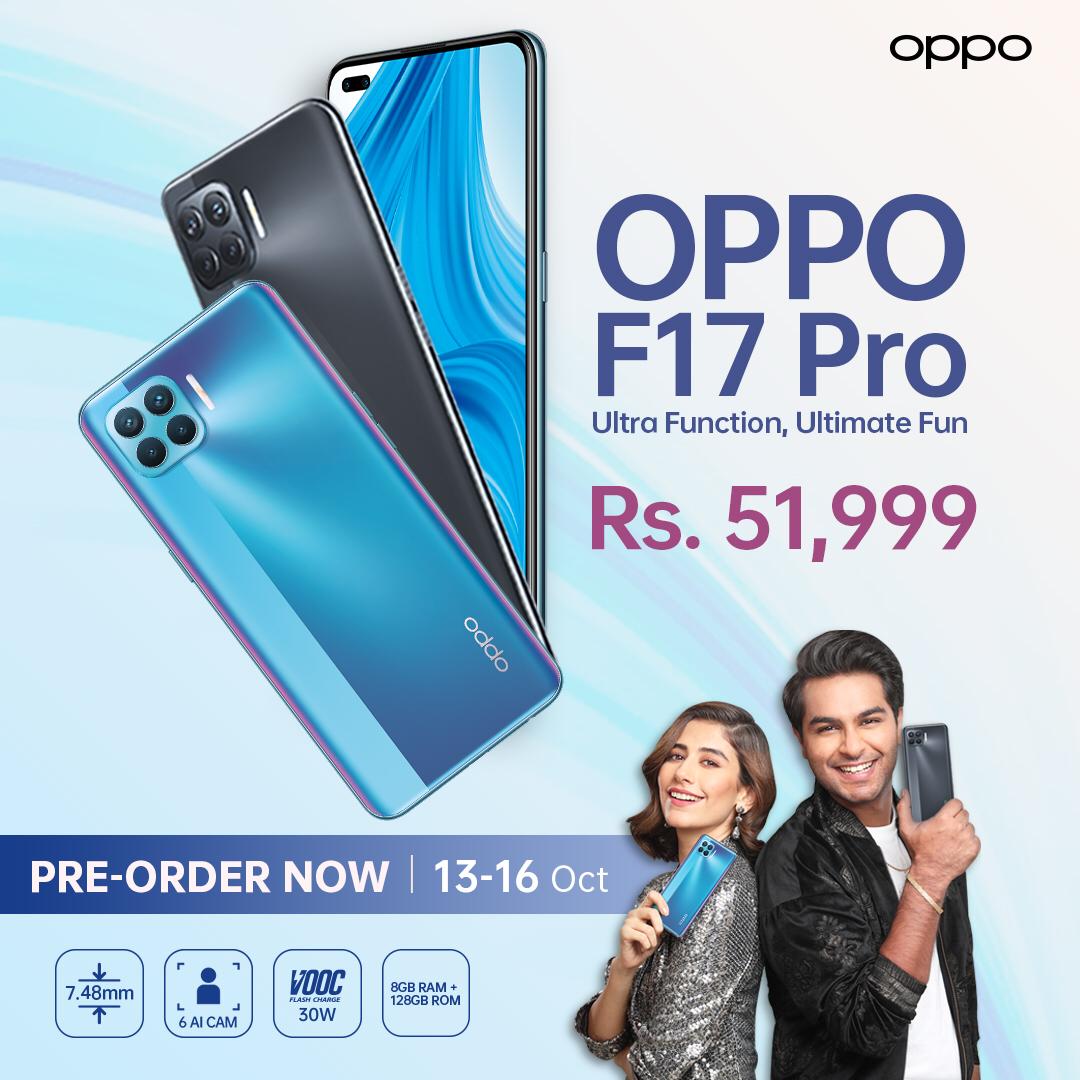 To achieve a 7.48mm ultra-thin and 164g ultra-lightweight body, F17 Pro uses an industry-leading design to optimize and fit the mainboard, battery, and other components into its slim design.

F17 Pro introduces a thin 220 Degree Edge that also offers a more comfortable and smoother in-hand feel. This is thanks to F17 Pro’s Rounded edge design technique, which refracts light at the top of the rounded point to accentuate its thin appearance and accentuates the comfortable in-hand feel.

F17 Pro’s 6.43” dual punch-hole display comes with an FHD+ Super AMOLED display with a ~84.9% screen-to-body ratio. The display uses Mini Dual-Punch Holes that boast a small segment of the camera (3.7mm diameter) and ensures that that the phone screen’s real estate is maximized for viewing details.

The phone comes with a six-camera setup with a quad-cam at the rear and two cameras in the front. Its AI portrait color enables users to capture dynamic urban street style and travel photos by muting the background black and white colors while enhancing the natural colors of the person or a group of people within the photo using AI.

According to the company, F17 Pro is also capable of capturing good low-light portrait thanks to the AI Night Flare Portrait and AI Super Night Portrait features.

F17 Pro comes with 30W VOOC Flash Charge 4.0 is Oppo’s proprietary rapid-charge technology. The company claims that with only a five-minute charge, users can either get four hours of talk time, two more hours to browse Instagram, or 36 minutes of PUBG gaming. The phone takes 53 minutes to fully replenish the battery, according to Oppo.

F17 Pro even introduces ways to optimize your phone’s battery life during the day or while you’re asleep. At night, AI Night Charging uses AI Learning through machine learning to learn the user’s sleep habits and charge the phone to 100% upon the moment they wake up.

F17 Pro is equipped with 8GB of memory, and 128GB of storage, which can be extended up to 512GB through a 3-Card Slot. F17 Pro’s Anti-Lag Algorithm can detect and clear data that cause memory errors, making stutters and freezes less likely.

F17 Pro is available for Preorder from 13th October to 16th October and will be available in the markets in Pakistan starting 17th October 2020. It will come in two colors including Magic Blue, and Matte Black.

F17 Pro will be available for purchase at a retail price of PKR 51,999 and can be booked online on https://www.oppo.com/pk/bookonline/

The phone’s launch event can be watched here.