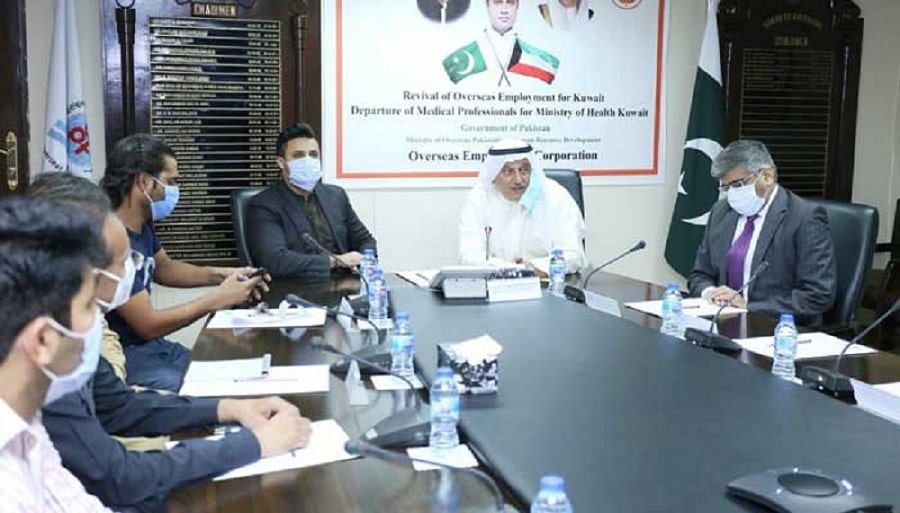 The agreement was finalized in July between the two countries.

Special Assistant to the Prime Minister (SAPM) on Overseas Pakistanis and Human Resource Development Sayed Zulfikar Abbas Bukhari virtually addressed the outgoing professionals telling them to uphold the highest values and standards of professionalism as they will be the ambassadors of Pakistan in Kuwait. SAPM also responded to their queries about their stay abroad and contract with the government of Kuwait.

“It will be you, who will pave the way for other Pakistanis, aspiring to seek jobs in Kuwait,” he remarked.

Special Assistant to the Prime Minister (SAPM) on Overseas Pakistanis and Human Resource Development Sayed Zulfikar Abbas Bukhari said Pakistan was fully committed to the development of Kuwait and will provide skilled workforce in multiple sectors, aligned with its Vision 2035.

The revival of workforce export to Kuwait was a historic moment for Pakistan as not a single worker had been sent to the Gulf country during the last 13 years, he said while addressing the healthcare professionals, who are scheduled to leave for Kuwait on Thursday.

The SAPM said Prime Minister Imran Khan had an international stature and clout due to which several countries had shown keenness in the recent past for hiring Pakistani manpower.  Zulfikar Bukhari said Kuwait had planned to hire the services of over 1,000 Pakistani healthcare professionals, including doctors, paramedics and nurses.

This cooperation is a part of Kuwait’s Silk City project under its vision 2035 & Pakistan will continue to strengthen it in the future.

He said a high concentration of the Pakistani workforce in Kuwait would help foster the bilateral ties between the two countries. “We want to expand our relations with Kuwait in every sector, especially those which are aligned with its vision 2035.”

The government’s prime focus was to export skilled manpower to the member states of the Gulf Cooperation Council (GCC) along with the European countries.

Ambassador of Kuwait to Pakistan Nasr Abdul Rehman J Al Mutairi extended his gratitude to the Pakistan government for providing medical assistance to his country during the difficult time of coronavirus. He also thanked the Pakistani medical professionals to help their Kuwaiti brothers face the deadly virus.

Ambassador Abdul Rehman said medical professionals across the globe were fighting the coronavirus at the forefront, which was duly acknowledged and appreciated the world over.

He expressed hope that the ties between the two countries would strengthen further under the new Kuwaiti leadership.