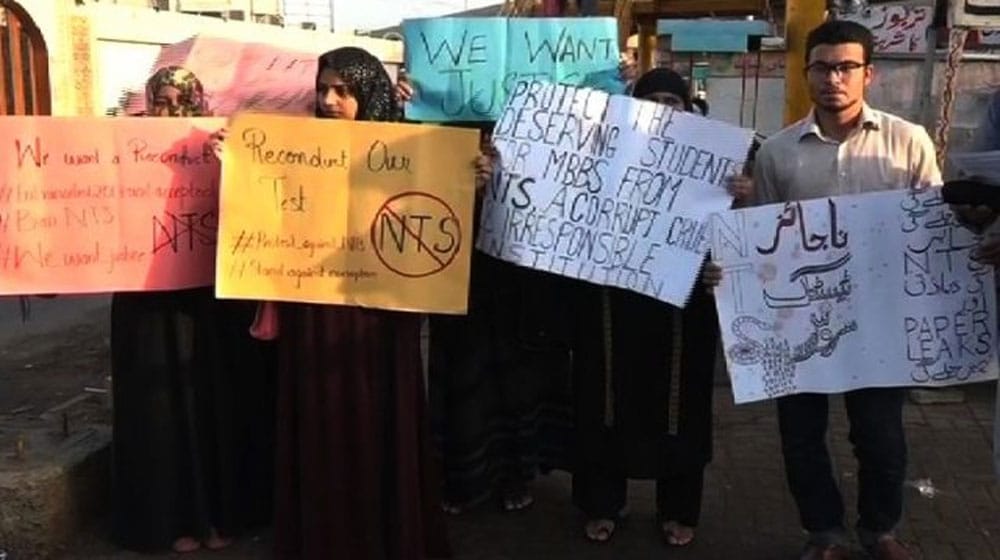 Candidates are staging protests in Dir, Battagram, and Bannu against the alleged leak of a National Testing Service (NTS) paper on social media.

Several candidates from Dera Ghazi Khan, Bannu, Nowshera, Dir, and Tank were taking the exams on Sunday for the posts of primary school teachers.

The protesting candidates said that the question paper for primary school teachers’ (PSTs) recruitment in Battagram was circulating on WhatsApp several hours before the scheduled test.

“We saw snaps and pictures of the entire test papers on Facebook and Whatsapp,” a candidate appearing for the test in Dir said.

A candidate identified that such leaks are a norm in every NTS test now.

“Paper leak has been reported several times in recent months ahead of any NTS test,” a protestor said, adding that the government has failed to eliminate corruption and mismanagement in the National Testing Service.

Another candidate revealed that papers of all subjects, including Maths, English, Current Affairs, Islamiyat, and General Science, were leaked on WhatsApp, adding that students were also allowed to carry their mobile phones inside the exam halls while the invigilators at the center were helping them as well.

Pakistan to Get the Second Shipment of Chinese Vaccine Soon

Another candidate maintained that only 25 percent of the candidates get jobs on merit through the NTS while the remaining seats are sold or manipulated, but the government persists with NTS.

He questioned the role of government authorities, blaming them for ruining the future of the youth.

Meanwhile, Khyber Pakhtunkhwa Chief Minister, Mahmood Khan, has taken notice of the matter and ordered an investigation into the matter. CM Mahmood said that there is a ‘zero tolerance’ policy against corruption and directed the authorities concerned to select the government officers on merit.