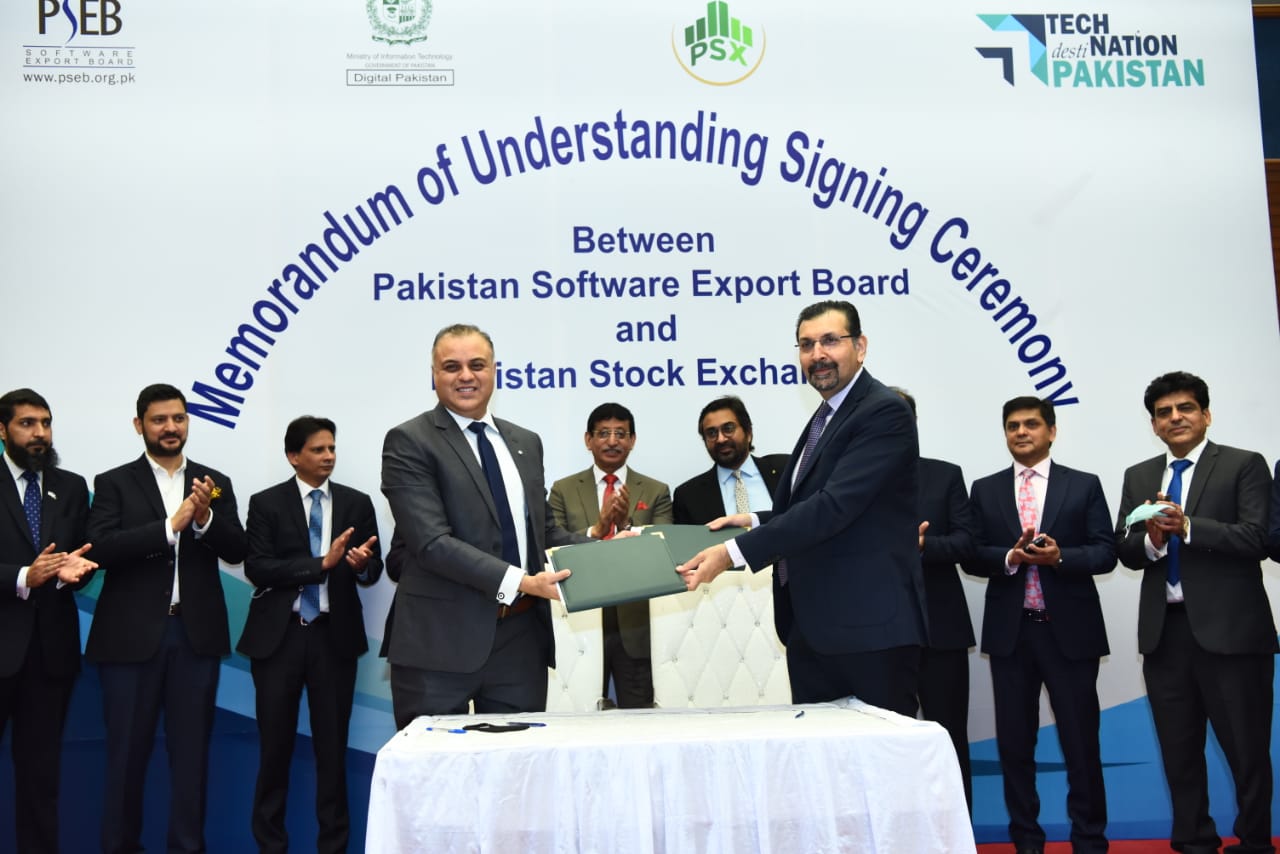 In yet another major step towards ensuring the sustainable growth of Pakistan’s IT Industry, the Pakistan Software Export Board (PSEB) has signed a Memorandum of Understanding (MoU) with the Pakistan Stock Exchange (PSX).

Osman Nasir, the Managing Director (MD) of the PSEB, and Farrukh H. Khan, the Chief Executive Officer (CEO) and MD of the PSX signed the MoU at the PSX building.

Senior officials from the federal Ministry of Information Technology and Telecommunications (MOIT&T), the PSEB, the Security & Exchange Commission of Pakistan (SECP), the PSX, and representatives of the IT industry were present at the occasion.

Nvidia Made $5 Billion During The GPU Shortage

MD PSEB Osman Nasir said that the PSEB would work with the PSX to conduct seminars, workshops, and events to create awareness of the benefits of listings for IT/ITeS companies and work with PSX-authorized financial advisors and consultants.

He said that the PSEB will also lead managers to assist the selected IT/ITeS companies for listing, adding that it aims to have 40 technology companies registered on the PSX, and it will extend significant financial and technical assistance to the tech companies to get listed on the PSX.

Shoaib Ahmed Siddiqui, Secretary IT said that one of the main factors impeding the growth of Pakistan’s IT sector is access to capital. The Pakistani tech companies that get listed on the PSX will be able to raise funds by issuing shares that can subsequently be used for further business expansion.

By listing on the stock exchange, a company gains instant credibility and stature with prospective clients and suppliers. This is a significant advantage, particularly for Pakistani tech companies, as it makes it easier to solicit overseas customers due to the increased credibility that comes from being listed on the PSX.

Listing on the stock exchange also improves corporate governance, and companies can maintain more autonomy and control through the ability to rapidly raise low-cost capital as compared to banks, venture capitalists, or private investors.

Syed Amin Ul Haque, the Minister for Information Technology & Telecommunication, stated that the MoU is a giant leap forward for the development of Pakistan’s IT industry, and that it is the first-ever MoU signed between the PSEB and the PSX.

The goal is to increase the number of listed technology companies on the PSX’s Main Board and GEM Board, which will, in turn, help to strengthen the financial ecosystem for the growth of the IT sector and contribute to the efforts for building a strong brand image of Pakistan’s IT industry in the international markets. Due credit goes to the SECP for reducing the corporate governance rules from 21 to three and for making it easier for technology firms to register on the PSX.

The MD PSX, Farrukh Khan remarked that “PSX’s Growth Enterprise Market (GEM) Board facilitates small and medium-sized enterprises, greenfield projects and tech startups to get listed on the Stock Exchange and raise capital”.

“The listing regulations for the GEM Board have been made flexible vis-a-vis the Main Board, while listing costs are significantly lower. Furthermore, there is an expanded list of advisors to choose from, which adds to the convenience of issuers,” he said.

Khan further stated, “The GEM Board of the PSX provides an ideal opportunity for small to medium-sized growth enterprises such as IT firms and tech start-ups to raise capital and expand their business horizon. These companies must capitalise on this opportunity and raise low-cost capital through the Exchange, which is crucial for their expansion and outreach. At the same time, the listing on the Exchange will attract attention to these companies, locally as well as internationally”.

“Importantly, listing on the GEM and the Main Board also provides a potential exit to investors. Such an exit avenue will make it easier for tech companies to raise venture capital,” he said.