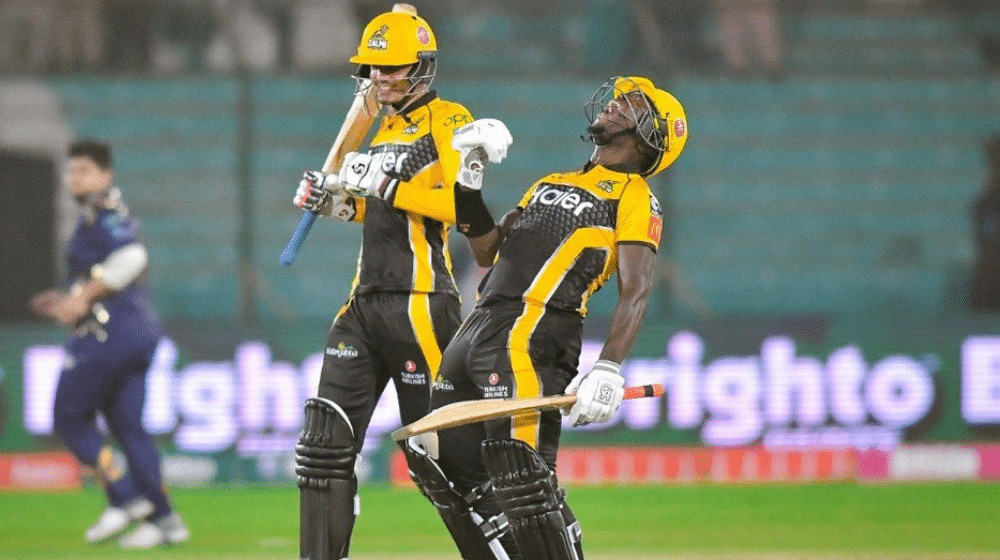 An exquisite half-century by Haider Ali helped Peshawar Zalmi defeat Quetta Gladiators by 3 wickets. Peshawar has jumped up two places and now sit at the second position in the PSL points table. After the dismissal of Haider, Sherfane Rutherford and Wahab Riaz took charge and dispatched the Quetta bowlers all over the National Stadium Karachi.

Quetta, still winless after three matches, were poor in the field and their bowling at the death was not up to the mark as they failed to defend a total of 197. Earlier, captain Sarfaraz Ahmed led from the front and scored a magnificent half-century of his own, he was ably supported by Azam Khan as they put a mammoth total on the board. This was the eighth match of PSL 6 and no team has been able to win after batting first.

Peshawar would be satisfied with their batting performance as the majority of the batsmen contributed towards their win.

Peshawar Zalmi and Quetta Gladiators are set to re-ignite one of the hottest rivalries in PSL as they go head to head at the National Stadium Karachi today. Both the teams have won the PSL trophy, but have fallen off the mark recently. Quetta have had a torrid start to their campaign, losing both their matches, while Zalmi made a comeback in their previous match after losing the first one. Quetta sit bottom of the PSL points table and will be looking to register their first points of the tournament.

Peshawar will look to continue their momentum and will be expecting to put in a similar performance. Zalmi will not be looking to experiment too much and are expected to field the same line-up.

Quetta look to be down and out early on in the tournament and they will be looking at the two South Africans, Faf du Plessis and Dale Steyn to inspire the team and raise the level of the team’s performance. Chris Gayle has headed back to the West Indies and won’t be available for the majority of the tournament. Quetta will be thankful that du Plessis joined the squad a few days ago.

Both teams have encountered each other sixteen times in the tournament. Quetta have won 8 and lost 7. Zalmi will be looking to equal the win-loss record.

Peshawar Zalmi:
Kamran Akmal has three centuries to his name in PSL history with his latest coming against the Gladiators last year. He will be looking to find his form and replicate a similar innings. He can be explosive on his day.

Azam Khan hasn’t hit the heights that were expected of him this season. Quetta have been struggling in the middle overs and will be looking for inspiration from the young prodigy. Azam is a due a big innings and this might be his time.