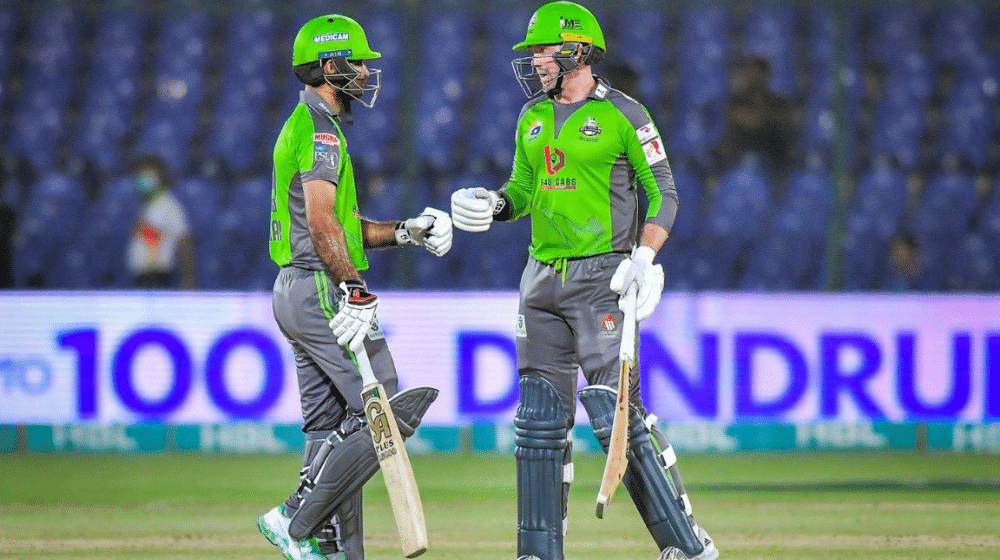 Lahore Qalandars pulled off an amazing run chase as they beat Karachi Kings by 6 wickets at National Stadium Karachi. Fakhar Zaman and Ben Dunk set the tone for the run chase, before a blazing cameo by South African all-rounder David Wiese wrapped things up for Qalandars.

Zaman and Dunk scored wonderful half-centuries in a hundred run partnership between the two, before Wiese came to the crease and scored 31 runs off 9 balls to take Lahore home. Mohammad Amir struck early as Lahore’s top order looked shaky at 0/2, but his good run was brought to an end by Wiese, who struck him for 20 runs in the penultimate over.

Earlier, Sharjeel Khan and Mohammad Nabi scored brilliant half-centuries to help Karachi to a total of 186/9. Shaheen Afridi was the star for Qalandars, picking up 3 wickets for 27 runs, including the prized wicket of Babar Azam. Shaheen was named as man of the match for his brilliant performance.

Karachi and Lahore swap positions on the PSL points table as Karachi move down to the third spot, while Lahore move up to the second spot.

The el clasico of PSL is upon us as two of the biggest cities in the country will go head to head in a rematch of last year’s final and it promises to be a spectacular match. Both Karachi and Lahore have won two matches each and have lost one so far in the tournament. If the Kings win tonight’s encounter, they will overtake Peshawar Zalmi and move to the top of the PSL points table.

Lahore will be determined to bounce back from a disappointing defeat to Multan Sultans in their last match and in order to do that, they are expected to bring in the latest addition to their squad, Sandeep Lamichanne, to the playing XI. Lahore certainly missed the services of Rashid Khan in the previous match and they will be hoping that Lamichanne puts in similar performances with the ball.

Karachi, on the other hand, steam-rolled past Multan Sultans in their last outing. Babar Azam and Joe Clarke completely dismantled the Sultans bowling line-up after an impressive showing by their bowlers at the death. Karachi will be hesitant to tinker with the playing XI and are expected to field the same line-up in this match.

Both teams have encountered each other eleven times in the tournament. Karachi have won 7 and lost 4 matches, including one loss in a Super Over. Lahore will be determined to hit back and claim the bragging rights in the tournament.

Karachi Kings:
Mohammad Amir will be crucial for Karachi Kings upfront. Lahore’s batting line-up has been in good form so far and Karachi will be hoping that Amir is at his best to restrict the destructive batting unit of Lahore Qalandars.

Lahore Qalandars:
Similarly, Lahore will be looking towards Shaheen Afridi to continue his fine form and take the crucial wickets of Babar Azam, Sharjeel Khan, and Joe Clarke without allowing them to do much damage. Shaheen has struck 10 times in his first over since 2020 and Lahore will be hoping he adds a couple more to his wickets column in the biggest match of PSL so far.