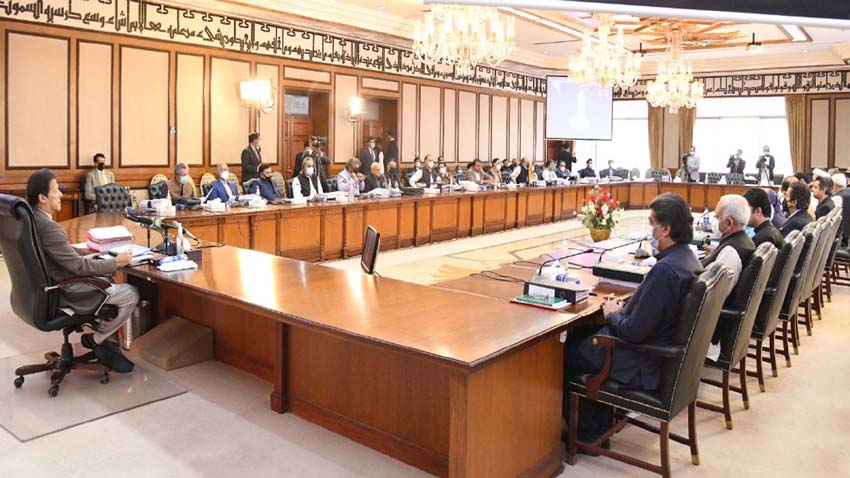 Minister for Information and Broadcasting, Syed Shibli Faraz, has announced that the cabinet accorded approval to the draft of ‘State Bank of Pakistan Amendment Bill, 2021’.

He said the purpose of this amendment bill is to make the SBP more independent for improving the economic situation of the country. The Minister said the cabinet also approved the draft ‘Income Tax Amendment Bill, 2021’.

Shibli Faraz informed that the cabinet appreciated the decision of Justice Retired Azmat Saeed for not receiving any privilege as Chairman Broadsheet Commission.

He said that due to effective measures, the government has reduced the losses of State-Owned Enterprises (SOEs) by half. He expressed hope to make them profitable in the next few years.

Speaking at the occasion, Finance Minister, Abdul Hafeez Shaikh, said that strengthening the national institutions to make them independent is the incumbent government’s top priority. He said that reforms are being made on fast track basis to make the institutions profitable.

He said that through another amendment, the State Bank is being made responsible to the Parliament to make the institution accountable.

The Minister said that the Income Tax Amendment Bill, 2021 would help in improving the tax system. He said that under this bill, the tax exemptions will be reduced to make the tax system uniform and transparent.

Under this bill, the government would withdraw corporate income tax exemptions within the range of Rs. 70 billion to Rs. 140 billion. Federal Board of Revenue (FBR) Chairman, Javed Ghani, said that the FBR estimated this much amount from these exemptions, but it depends on how the economy would behave in the future.

The Finance Minister also said that the government restarted formal relations with the International Monetary Fund (IMF), and soon the international board of the fund will visit Pakistan.

Sheikh said that concrete measures are being taken to control inflation. He said that, in this regard, the government reduced its expenses, and as a result, the country’s primary balance has turned positive after a long period.

Adviser to the Prime Minister on Institutional Reforms and Austerity, Dr. Ishrat Hussain, said that institutional reforms are the need of the hour, and the government is focusing on improving the performance of the institutions under the principle of the right person at the right job. He said steps are being taken to further reduce the losses of SOEs.

SBP’s Scheme Will Raise The Investment-to-GDP Ratio for Pakistan: Report

Responding to a question, Hafeez Shaikh said that the government is further promoting the policy of targeted subsidy to provide relief to the underprivileged segment of the society.

In response to another question, he said that strengthening the institutions and improving the tax system is among the top priorities of the government.

In response to a query, Adviser on Institutional Reforms and Austerity, Dr. Ishrat Hussain, said that institutional reforms will prove to be a milestone in improving the performance of the State institutions.