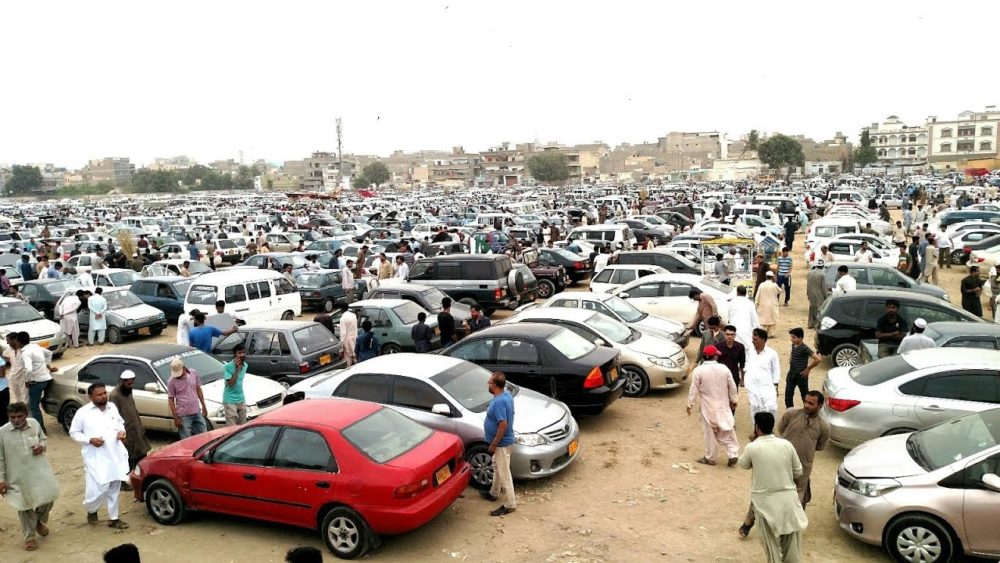 If you have a budget of Rs. 15 lacs and want to buy a car. You would have been able to get yourself a fairly decent, brand new car around six or eight years ago within this budget, but unfortunately, Rs. 15 lacs, despite being a huge amount, does not allow you to afford much of a choice in the market for brand new cars today.

The value of cars has shot up by a huge degree in recent times, making the idea of ‘brand new affordable cars’ nigh upon obsolete. In fact, there are only four locally manufactured passenger cars that can be bought brand new for under Rs. 15 lacs:

This is not to say that these cars are bad in any way but they most certainly are expensive, as is every car in the Pakistani market right now. Also, the limited number of options for this amount should serve as proof that Pakistan’s automotive industry still has a long way to go to create a healthy car market.

However, the canvas opens up quite a bit if one shifts focus to the used car market. Rs. 15 lacs may not be able to get the newest cars in the market but it will surely provide the opportunity to choose a variety of interesting local and imported cars.

Here is a list of 5 used local cars that can be bought under Rs. 15 lacs:

Note: The ranking of the cars listed below is based on performance, reliability, ease of maintenance, comfort, safety, and fuel economy. Taking a page out of Doug Demuro’s car reviews, each car will be scored out of 10 in the aforementioned category so that it can be ranked objectively from 5 to 1 (1 being the best). The chart is called the ‘Ownability Index’. 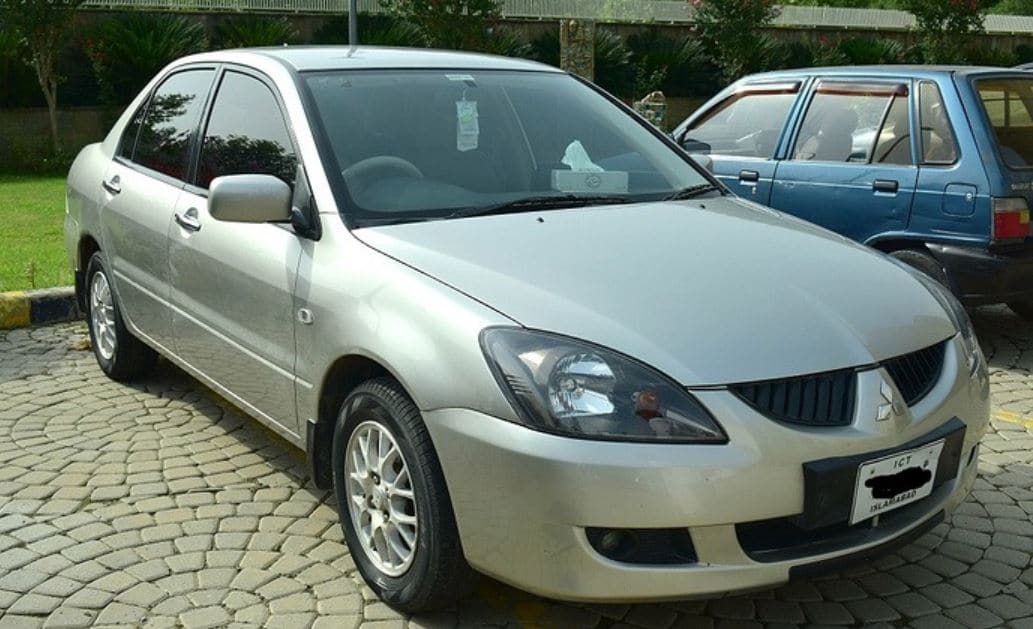 Offered between 2002 and 2006 in the Pakistani market as a complete built-up unit (CBU), the 6th Gen Mitsubishi Lancer is easily one of the best and most underrated cars to ever grace the Pakistani automotive market, not because of any groundbreaking technology or features, but because of the driving experience.

Technically, a rule has been broken here by adding this car to the list since it is not ‘locally assembled’, but given that it is as good as it is, the Lancer deserves attention and appreciation.

The few who had bought it were pleasantly surprised by its punchy performance and silky smooth ride. The 1.6-liter naturally aspirated 4 cylinder engine made a respectable 110 horsepower and 150 Nm of torque and could be mated to a 5-speed manual or a 4-speed automatic gearbox. Although the figures were less than those of the Honda Civic from the era, so was the weight of the Lancer, which allowed for a decent acceleration.

The car had a MacPherson Struts suspension setup in the front and a multi-link coil spring suspension at the back as opposed to a torsion bar setup being offered in multiple other cars at the same price point and segment, which gave the Lancer a much more comfortable ride. It also had ventilated disc brakes at the front with ABS technology, and a drum brake at the rear. 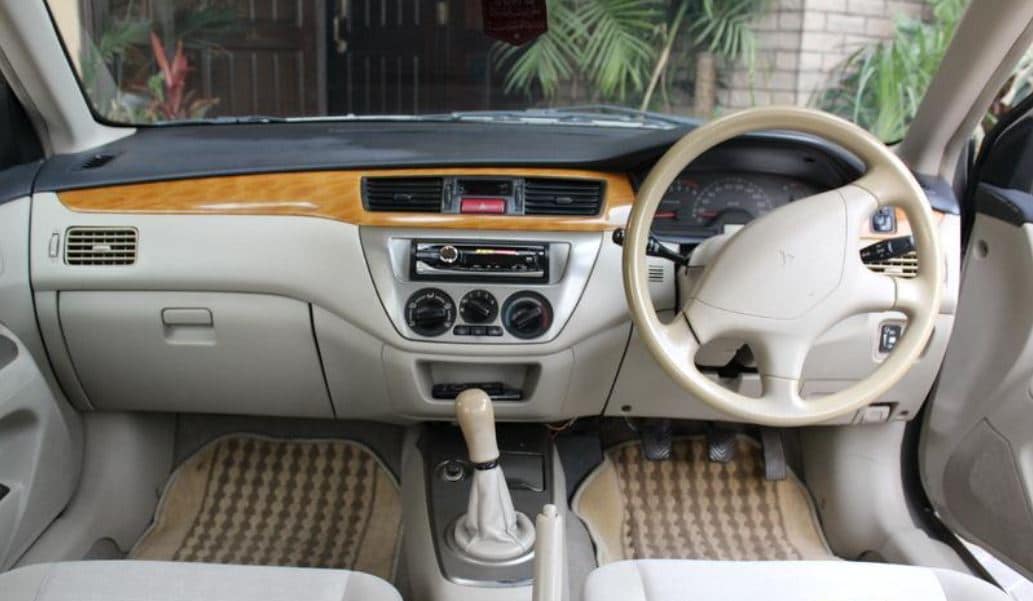 Official: Xiaomi is Launching Its Own Car Business With $10 Billion Investment

In terms of design, all the cars from this era were bloated and heavy while the Lancer carried on with its sleek, simple, and elegant look in addition to offering a very roomy cabin, excellent ergonomics, and superior outside visibility with a minimal amount of blind spots.

However, the reason why the Lancer has been ranked at the bottom is that it had some recurring reliability issues with a few engine components and the front suspension. The other hurdle was, of course, the unavailability of spare part dealers and mechanics, which made its maintenance bothersome.

Here is how the Lancer stacks up in the Ownability Index: 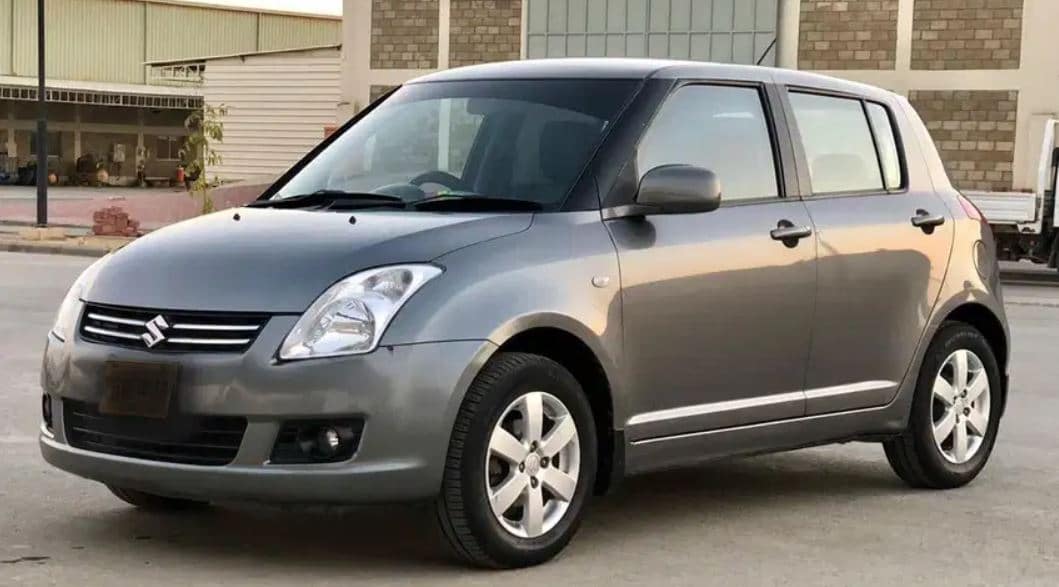 Ever since its launch in 2010, this car has been a smashing success because when it was introduced, the Pakistani automotive industry was filled with big, sluggish, underpowered lumps of metal, plastic, and rubber that had been uninteresting and boring to drive.

This compact hatchback was a breath of fresh air as it was small, light, nimble, and fairly powerful, thanks to a 1.3 liter naturally aspirated 4-cylinder DOHC engine that made 90 hp and 114 Nm of torque and was mated to a 5-speed manual transmission. There is an automatic variant in the lineup as well but it is usually priced over Rs. 1.5 million even in the used market.

The car has a McPherson strut suspension setup in the front and a torsion bar coil spring setup in the back. Furthermore, it has ventilated discs upfront with ABS technology and conventional drum brakes outback. 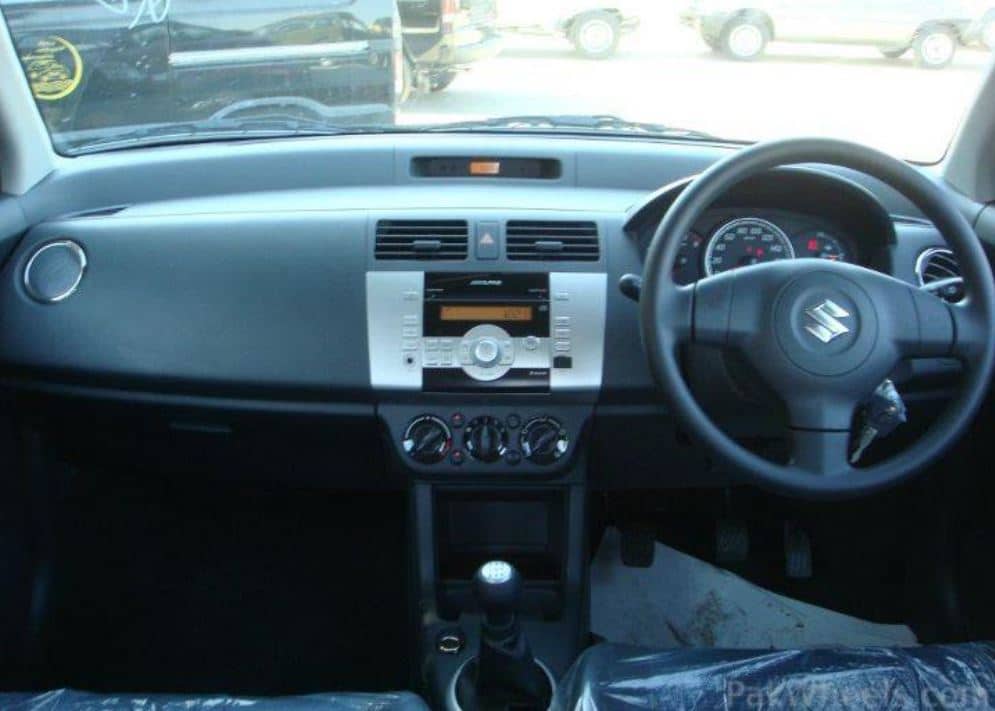 However, this car has a few points of concern as well. Firstly, it is a Gas Guzzler; and secondly, it has surprisingly poor outside visibility due to its fat A, B, and C pillars and a high beltline. Furthermore, the suspension is more on the firm side, which makes the ride somewhat harsh.

In consideration of these elements, here is what the car has scored in the Ownability Index:

Released in the Pakistani market in early 2002, this generation of the Civic is perhaps the most understated and underrated of all the Civic models. A particular segment of people finds the 7th Gen Civic to be a very desirable car (particularly the facelifted eagle-eye version), especially when they will learn that it can now be had for under Rs. 1.5 million.

The car was offered in two main variants — the base EXi trim, and the finer VTi trim. The EXi would get a 1.5 liter, naturally aspirated 4 cylinder petrol engine that made 115 hp and 142 Nm of torque. The car could only be had with a 5-speed manual transmission.

The VTi was offered with a 1.6 liter, naturally aspirated 4 cylinder petrol engine that made a healthier 132 hp and 151 Nm of torque. It offered the option of a 5-speed automatic transmission with Honda’s then-available new Progressive, Shift Schedule Management Technology (PROSMATEC).

Both trims had ventilated discs on all four wheels but the VTi also had the Anti-Lock Braking System (ABS) technology, allowing for good stopping power. Both also had a MacPherson Struts coils spring suspension setup in the front and a double-wishbone coil spring setup outback. 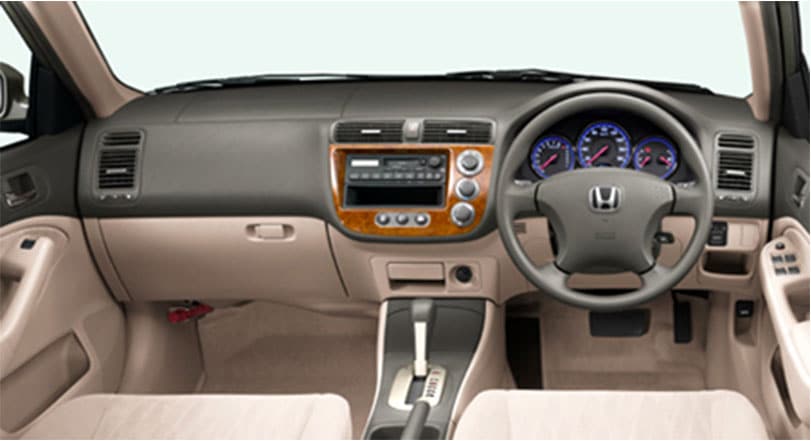 The VTi trim level was also offered with extra goodies like 15-inch alloy wheels, a sunroof option, a better sound system, a pair of optional foglights, and a differently patterned fabric interior.

However, one of the challenges with it is that it is quite hard to find one in a mint condition as its owners tend to keep it and drive it for a long time. Since it is a nearly 20-year-old car, the parts for the 7th Gen Civic are also hard to find.

Here is how the Civic would do in the Ownability Index: 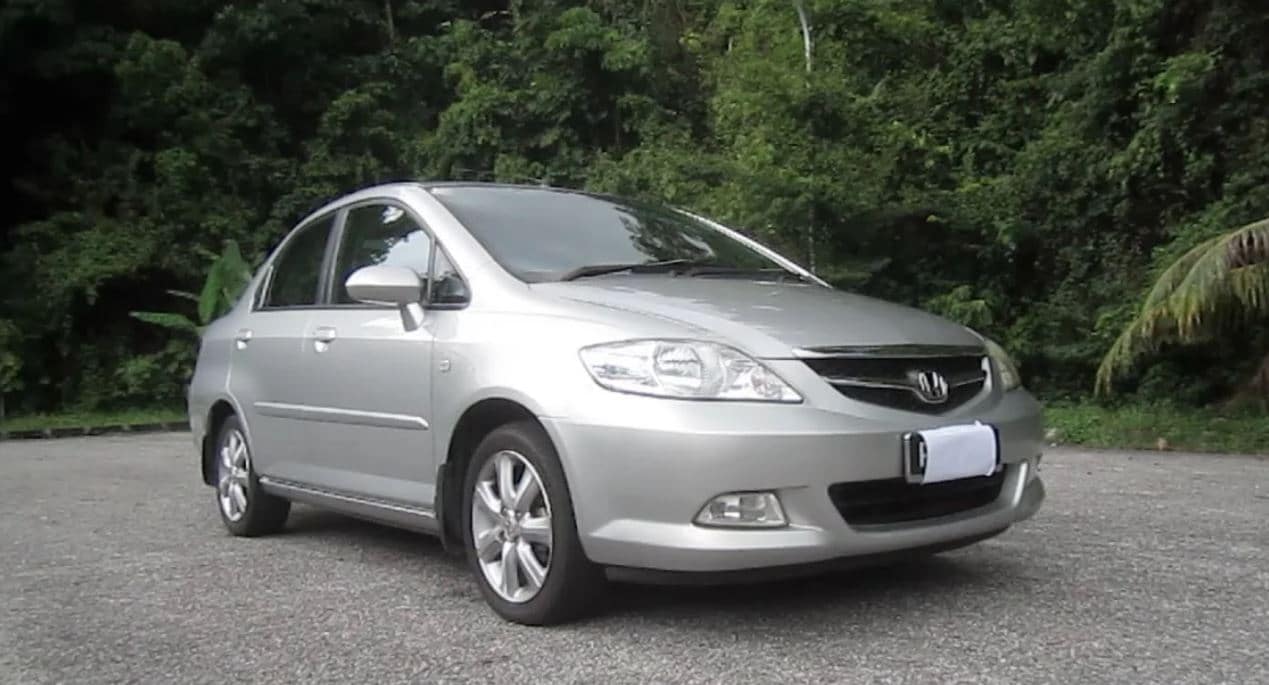 Calm, quiet, silky smooth, although slightly funny looking, the 4th Gen Honda City is one of the best economy cars in the market that can be had for under Rs. 15 lacs.

It is equipped with a 1.3 liter, naturally aspirated 4-cylinder petrol engine that makes 82 hp and 119 Nm of torque. The car was offered with the option of either a 5-speed manual or a 4-speed automatic transmission. There was also a VTEC Steermatic variant with a 1.5-liter engine and a 7-speed CVT automatic transmission. However, the mint condition VTEC Steermatic Citys are quite rare in the market, and if one is found in a good condition, it is likely to cost over Rs. 15 lacs. 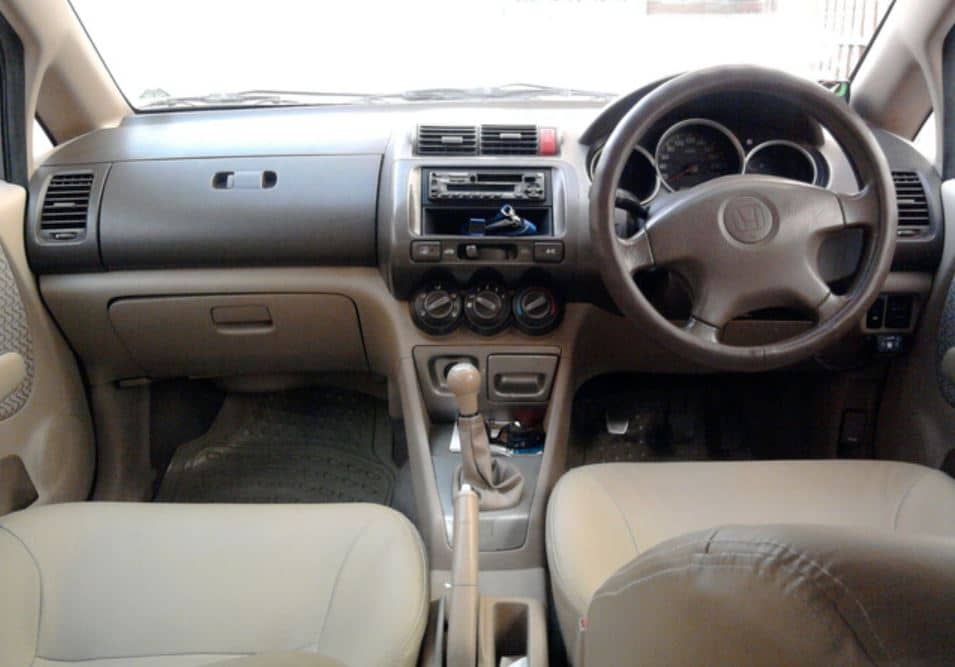 On the inside, the car has all the basic standard features like power door locks, power windows, a decent sound system with USB/Aux connectivity and four speakers, an A/C, 4-way steering adjustment, etc. Outside, the owner has the option of alloy wheels and foglights.

The car had certain issues with the electronics. Most notoriously, the power window motor would often malfunction, whereby the window of the car would go down and would not come back up. Moreover, as it is a Honda, the ‘genuine spares’ are likely to cost a hefty bill for each maintenance run.

Overall, here’s how the car ranks in the Ownability Index:

Before moving on to the number one pick, here are some honorable mentions:

The Corolla is the ultimate darling of the Pakistani automotive market due to its impregnable reliability and spectacular resale value. The AE100, also known as the ‘Indus Corolla’  can also be found in the high Rs. 8 lacs range despite having been driven for hundreds of thousands of kilometers. Today we will discuss the Corolla that succeeded the legendary AE100.

The 9th Gen Altis was launched in the Pakistani market in mid-2006 and was sold until late 2008 before it was replaced by the 10th Gen Corolla. The car was offered with a 1.8 liter, naturally aspirated 4-cylinder petrol engine that made 134 hp and 171 Nm of torque. It could be had with a 5-speed manual or a 4-speed automatic transmission.

The Corolla had ventilated discs at the front and solid discs at the back, and the Anti-Lock Braking System (ABS) technology. Since it was too big and heavy (1,300 kg), the brakes were known to be ineffective for a car of this stature. In terms of suspension setup, the Corolla had a MacPherson Struts coils spring suspension setup in the front and a torsion bar coil spring setup at the back. 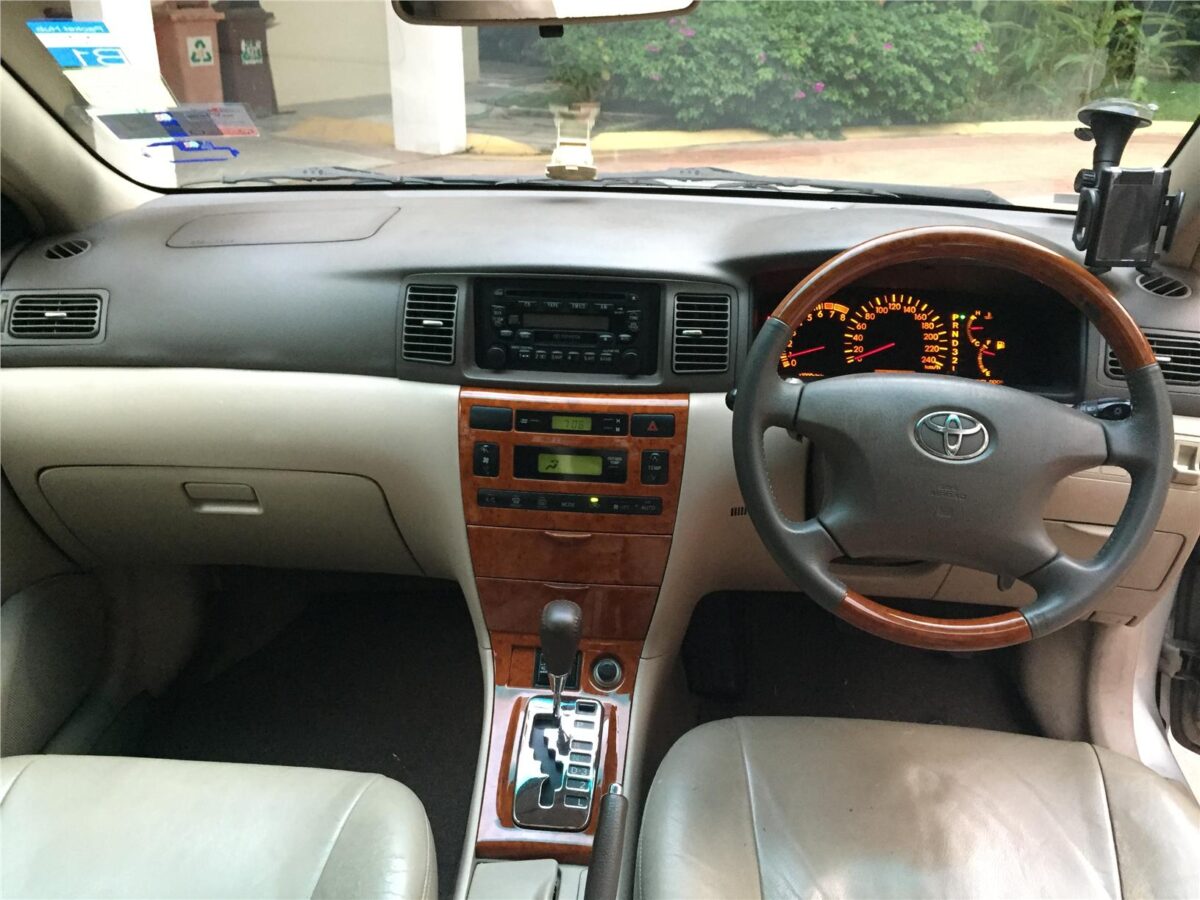 The Altis was the finest of all the Corolla trim levels, with wood patterned plastic paneling inside, leather seats, a leather stitched 4-spoke steering wheel, a stitched gear knob, a better gauge cluster, an advanced sound system, a driver-side airbag, standard fog lights, and a few other improvements over the XLI and GLI trim levels.

Outside, the car had body-colored door handles, mirrors and side impacts, side skirts, and alloy wheels that made it different from the lesser Corolla variants at the time. And since the 9th Gen Corollas used to be fairly common, they can easily be found in the market in good condition.

Here is how the 9th Gen Corolla Altis does in the Ownability Index:

Rs. 15 lacs is a huge amount of money and can only allow one to buy a car that will get them from point A to B in relative comfort. None of these cars offer basic features like parking sensors, airbags, sat-nav, cruise control, or other safety features, but neither do a lot of the modern cars that are made in Pakistan.

If you want those features, you will have to resort to the imported car market, but that is a list for another time.