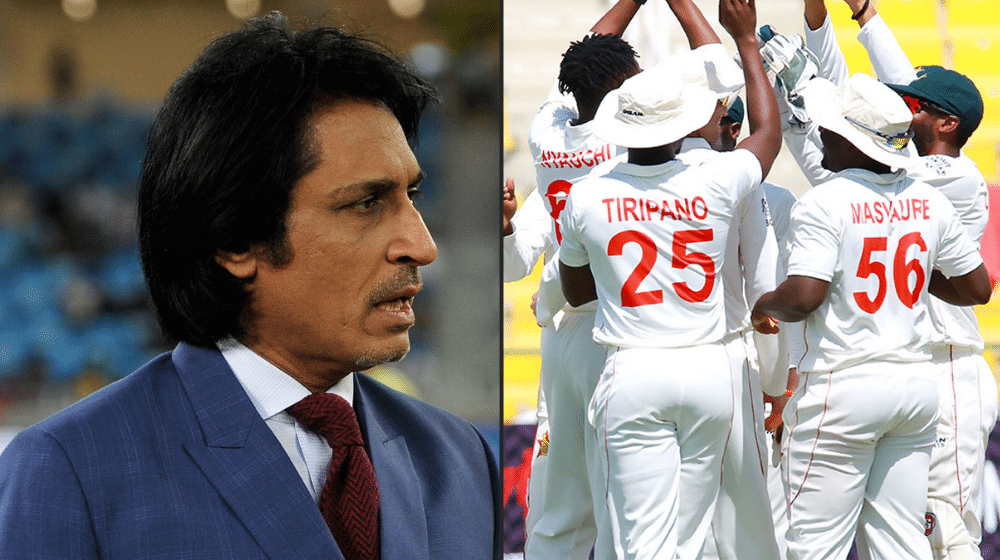 Former opener and current cricket commentator, Ramiz Raja, came under fire on social media for his comments regarding the Pakistan and Zimbabwe Test series. Ramiz said that the Pakistani fans would switch to other sports if such series keep happening in international cricket. He added that Zimbabwe should stop playing Test cricket for some time and turn their focus solely towards limited-overs cricket.

His comments came after Pakistan comfortably won the two-match Test series, registering an innings victory in both matches as a weak Zimbabwe side was unable to put up a fight against a solid Pakistan Test side.

Zimbabwe was unlucky throughout the tour, as they had lost key five first-team players through injury and various reasons, including the captain Sean Williams, Craig Ervine, Sikandar Raza, and Kyle Jarvis.

Ramiz’s comments did not sit well with cricket fans, and experts reminding him of various such series in the past.

Let’s have a look at the social media reactions:

Famed cricket writer, Jarrod Kimber, reminded Ramiz of the transformation of the number one Test side in the world.

Renowned cricket journalist, Faizan Lakhani, pointed out Zimbabwe’s Test record against Pakistan. Pakistan drew the Test series 1-1 on their last Test tour of the country, in 2013.

Weaker teams will only improve if they frequently play strong and better ranked sides. We can’t isolate a team saying oh they aren’t too good to play with us. Zimbabwe won more tests (3) against Pak than any team other than Bangladesh (7). https://t.co/USNEARzmox

Zimbabwean journalist, Adam Theo, wasn’t pleased with Ramiz’s comments, especially after Zimbabwe was the first international team to tour Pakistan in 2015, after the 2009 attack on the Sri Lankan team.

Interesting. It’s forgotten that Zimbabwe took a risk and toured Pakistan after years of not being allowed to host home games. And in the spirit of cricket, this is how you repay them Mr Raja?

Cricket has this very weird lack of confidence in itself – or belief that countries can improve.

When Panama qualified for the Football World Cup, no one worried it would ruin the sport https://t.co/zwNeqYcSyY

Someone please show our cricket babus the test results of our recent matches in Australia and New Zealand. Don’t want to grow the sport of test cricket but constantly complain about it dying. https://t.co/Zf7bIDTrab

This inferiority complex cricket has is exhausting. People will love what they love. https://t.co/Ini31aZkCP

Pakistan's captain in that series: 👇https://t.co/G9EGzLA507