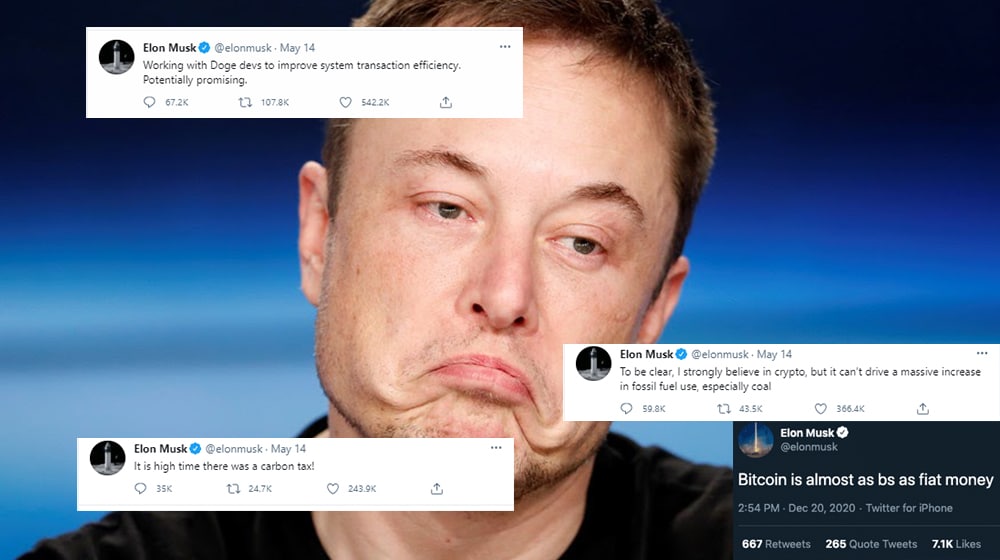 Over the past month, Elon Musk saw his net worth sink by as much as $34 billion, pushing him down to third on the list of richest people on the planet.

Bitcoin and Cryptocurrencies Witness One of the Biggest Crashes Ever

Musk lost his spot as the world’s second-richest person to LVMH (Louis Vuitton) top gun, Bernard Arnault, as Tesla Inc’s shares fell 2.2 percent. That was on top of last week’s slump amid a global rout in technology stocks and fresh signs of trouble in its business in China.

The drop comes after Musk posted a tweet, saying that “Tesla has suspended vehicle purchases using Bitcoin. We are concerned about rapidly increasing use of fossil fuels for Bitcoin mining and transactions, especially coal, which has the worst emissions by fuel”.

As soon as this tweet went viral, BTC holders went into panic mode and started dumping their holdings over fears of losing big on the spot-trading ledger. This sent the world-famous digital currency tumbling down, leaving behind shadows of doubt over Musk’s capability to understand the crypto puzzle.

Google and Samsung Are Partnering to Improve Smartwatches

It’s worth pointing out that in March 2021, Elon Musk made a whopping $25.1 billion in less than 24 hours, setting an all-time record of his own. He surpassed Jeff Bezos with this achievement as well, briefly sitting on the top of the world’s richest list, until today. What are the odds that Musk is having a personal reckoning at the cost of limitless tweets about cryptocurrencies?