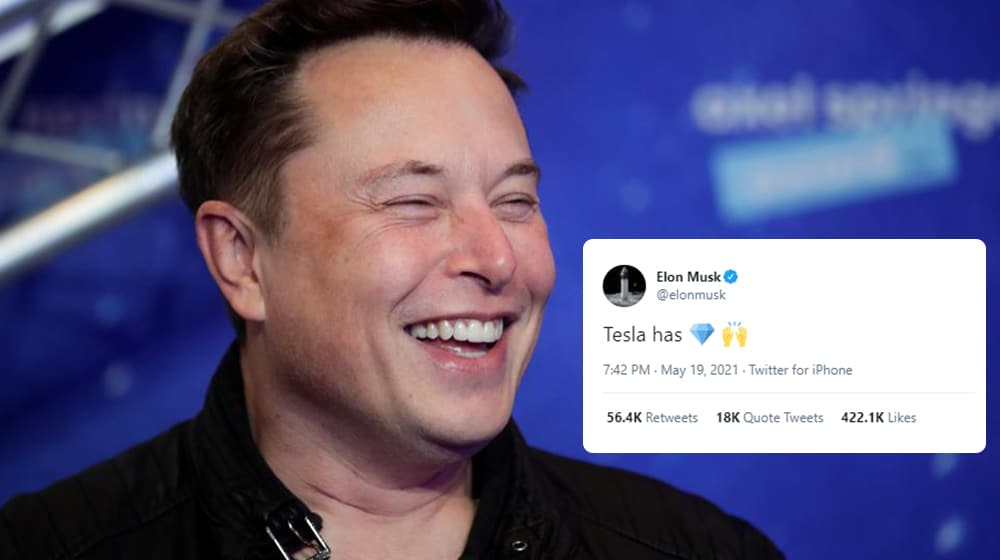 Although the crypto streets momentarily lost faith in Elon Musk’s “whispering” abilities after his negative remarks about Bitcoin, the fan-following looks like it’s going back towards him after most cryptocurrencies boasted monumental recoveries from Wednesday’s catatonic losses.

Similar to the buildup trends which led to the market’s big collapse in as few as 3 hours yesterday, Elon Musk single-handedly steered the cryptoland back to recovery with one tweet.

The Tesla chief took to Twitter for expressing his commitment to the crypto world in emoji form, saying that Tesla has “diamond hands” in as many as two words.

If you’re still wondering what he meant by that, Decrypt was quick to point out that Musk was referring to a popular meme that encouraged “holding onto an investment even as the price drops”.

For starters, the tweet suggests that Tesla will not sell its BTC any time soon, and looks like the meme reference was indeed on point, since the Bitcoin started rebounding above $40,000 right after Musk posted the tweet.

Since then, the BTC has recovered almost by 9%, and comfortably sat north of $39,000 at the time of writing.

Lower market caps also jumped after the tweet, with Ethereum flooding back its holding value past the $2,500 mark after hitting a 24-hr low of $2,200. Overall, the recovery period is proceeding with a gradual pace, and there’s high chance we’ll see the market in green when the market re-opens coming Monday morning.