Haval is a subsidiary of a large Chinese automotive group called Great Wall Motors (GWM). The brand particularly specializes in manufacturing and selling SUVs, and while its entire lineup consists only of subcompact, compact, midsize, and full-size SUVs, it is looking to dabble in the Electric Vehicle (EV) arena.

Although the automaker has a rather large product portfolio within the SUV segment, for some reason, SEWL saw it fit to launch two different SUVs of the same category under the same marque at the same time in the Pakistani market.

While both the vehicles are set to compete in Pakistan’s already populous compact crossover SUV segment, there are a few distinguishable features that can help buyers make their choice.

Here is a detailed comparison of both SUVs: 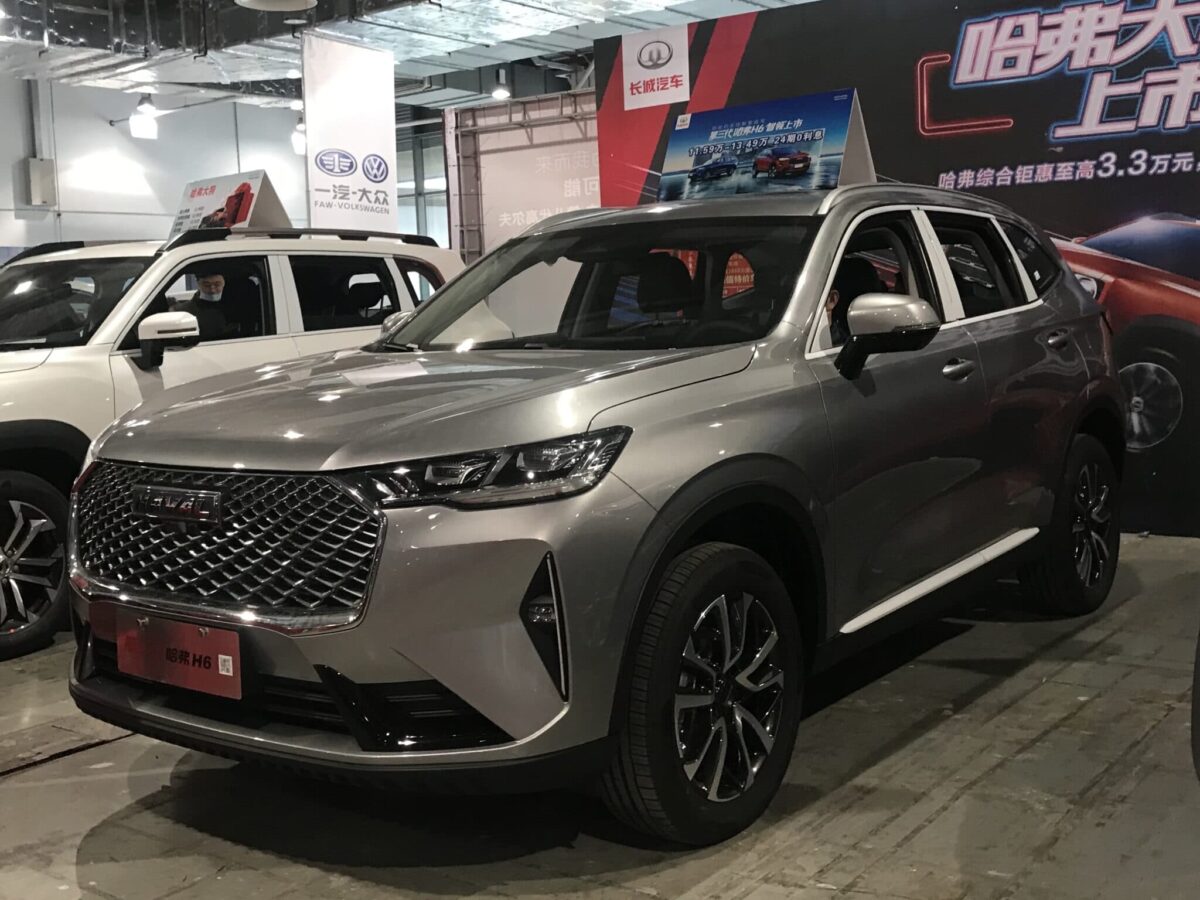 The local market will receive the 3rd generation Haval H6 — a fairly handsome-looking SUV. Its overall silhouette is boxy, which is typical of several SUVs. The front sports a modern-looking pair of dual projector headlamps, a huge chrome mesh grille, a simple but cutting-edge bumper design, and a squared-off front fascia that gives the SUV an imposing stance. 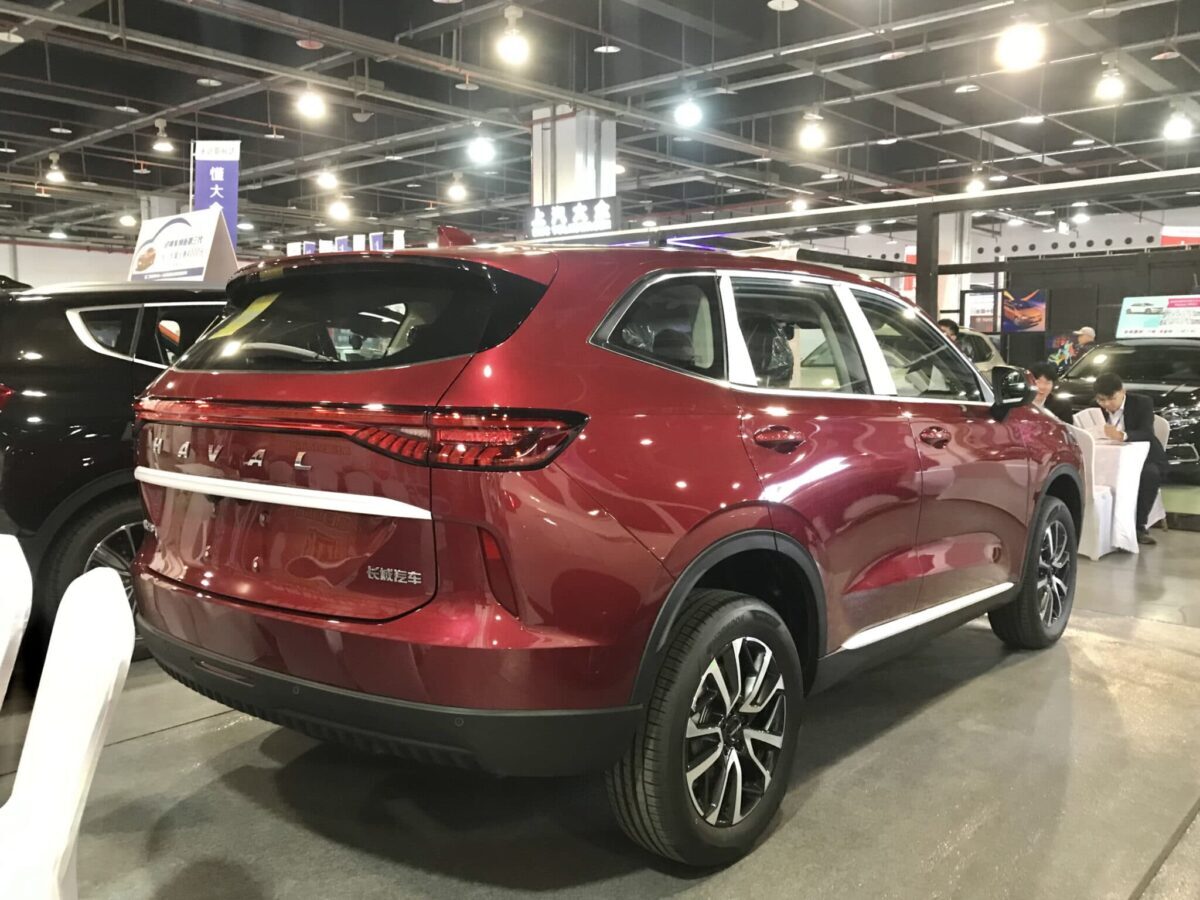 The rear seems to clash with the front of the SUV in terms of design. While the front looks boxy and aggressive, the rear appears more rounded off and subtle. The single lightbar at the back and the modern LED taillights allow for an attractive rear look.

The small rear windshield, the taillight design, and the smooth overall design make the rear resemble the KIA Sportage. Nevertheless, it is a good-looking SUV. Besides the ‘soon to arrive’ Changan Uni T, the Haval Jolion is arguably the most bold-looking SUV to hit the Pakistani market. Whether it looks better or worse than the MG HS is debatable, but for now, there is nothing like the Jolion on the Pakistani roads.

The front fascia consists of a similar chromed mesh grille, modern-looking headlamps LED headlights, turn signals, and sharp-looking DRLs that extend further down into the bumper making a boomerang-shaped pattern.

The bottom portion of the DRLs is surrounded by ornamental but non-functional air vents. All of this, combined with a similar boxy front look and overall silhouette, gives the car an aggressive look. Much like that of the H6, the side profile of the Jolion is clean and simple. The door handles and the door mirrors match the color of the body. A single sharp line runs across the length of the SUV, giving it a clean look. Together, the chromed side-impact strips, a chromed trim-piece surrounding the A, B, and C pillars, and a modern alloy wheel design give the car a premium look.

Once again, the rear appears to be a mixed bag of both good and below-average elements. First the good: the tailgate design slopes slightly downwards and then goes completely vertical, giving the Jolion its distinct look. The spoiler, albeit non-functional, gives it an edge.

The bottom portion of the bumper is a hodgepodge of chrome, silver, and matte black trim pieces giving it a below-average look. Despite its modern look, the taillight design comes across as generic and half-done.

The vehicle’s looks are a highly subjective topic, but it is safe to say that the Jolion is a unique-looking SUV that is sure to catch the attention of many. 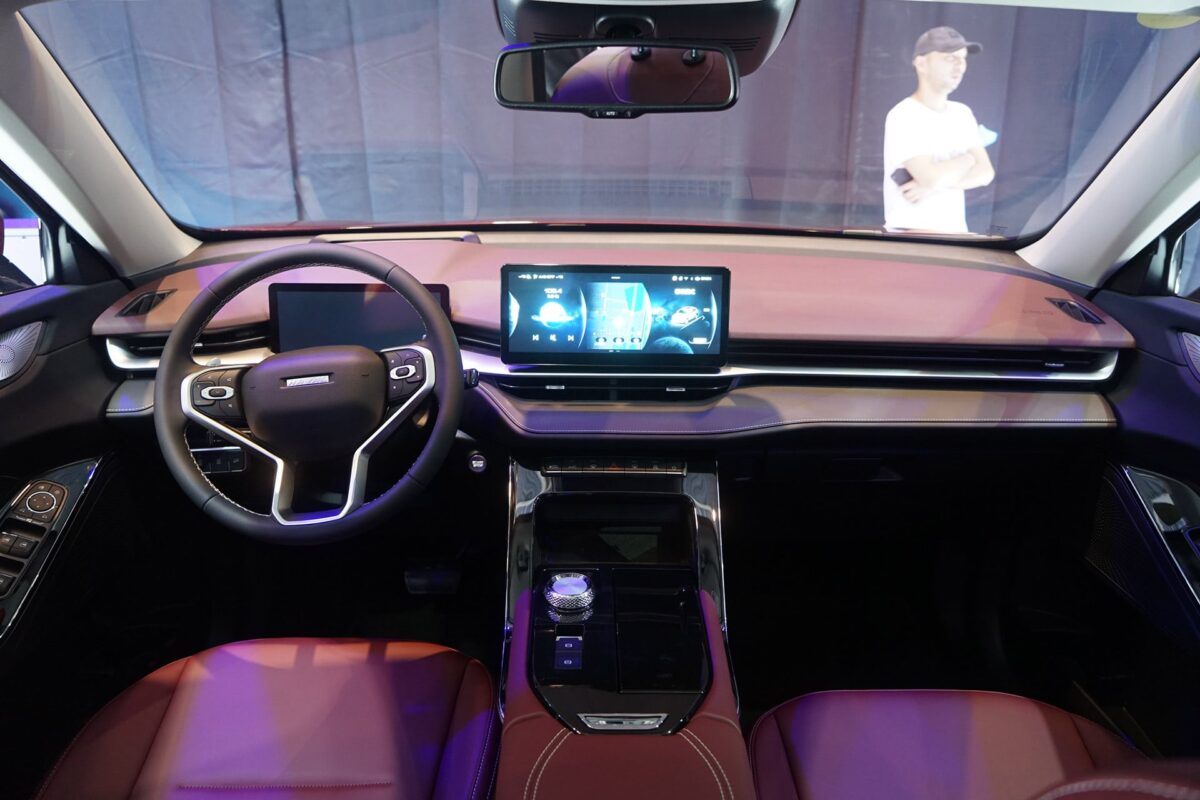 The cabin design and layout are very clean and futuristic. The interior seems to be trimmed in good quality materials, and the design does not include any hints of analog instruments.

Everything in this car is either a screen, a dial, a small button, or a flat panel. The steering also has a futuristic 3-spoke design, and the dashboard is almost as minimalistic as a modern EV, which allows for a smooth experience. 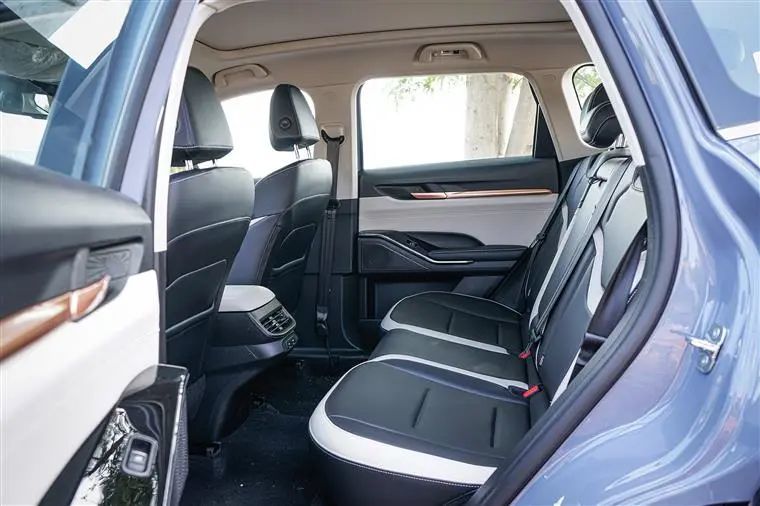 Regarding seating space, the cabin seems to have ample room to easily accommodate four adult passengers, even for long journeys. The boot space is 600 liters, which is big enough to carry a large amount of luggage. The rear seats also fold down to provide a large loading area of 1,485 liters to place larger items in the back. 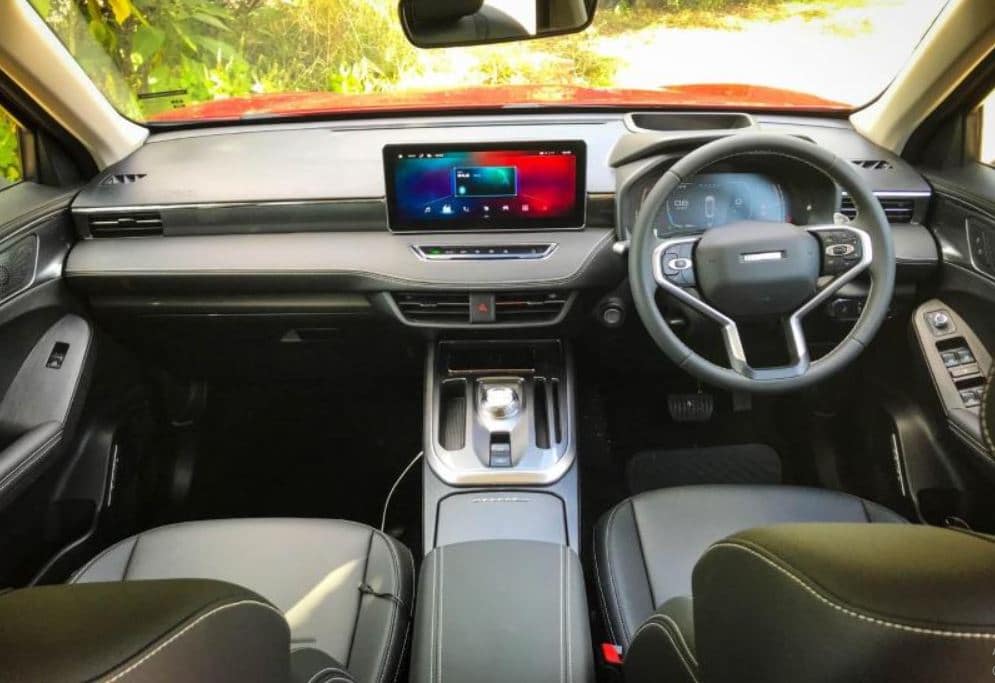 Like the interior of the H6, the Jolion also boasts a modern and elegant but clean and simple interior design. The two-step dash layout gives the car a premium look and feel, and the materials all seem to be quite nice. The steering design closely resembles that of the H6. However, the all-digital head unit display (HUD) is slightly more conventional in design. 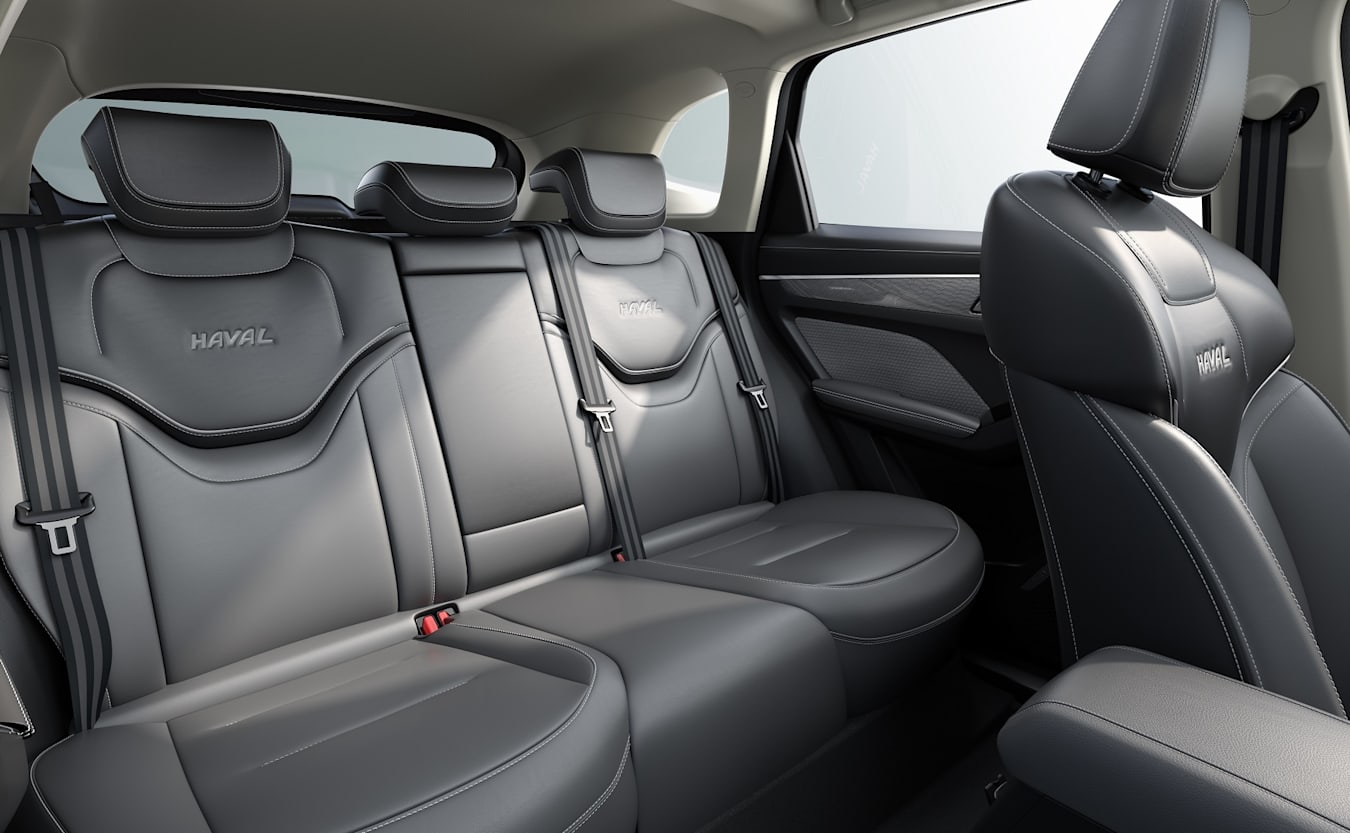 In terms of cabin space, the Jolion is fairly roomy and can comfortably seat four passengers. The boot space is 337 liters, which is big enough to carry two large suitcases and a medium-sized suitcase or luggage bag. However, with the rear seats folded down, the luggage space increases to a hair over 1,100 liters.

Although both the H6 and the Jolion are categorized as C-Segment compact crossover SUVs, the H6 is slightly larger and heftier than the Jolion. The following are the recorded measurements of both:

MG is Launching 3 New Vehicles With a “Surprise” Cheap Car

The Jolion will be available in Pakistan with only one engine option — a 1.5-liter turbocharged 4-cylinder engine that makes 147 horsepower (hp) and 220 Newton-meters (nm) of torque. All this power is sent only to the front wheels via a 7-speed DCT automatic gearbox.

The SUV has McPherson struts up front and a torsion bar coil-spring suspension at the back. It also has disc brakes on all four wheels with an Anti-lock Braking System (ABS), Electronic Brakeforce Distribution (EBD), and Brake Assist (BA) technology to allow for good stopping power.

Various international automotive outlets have reported the fuel economy of the Jolion to be 12.3 km per liter, but the figure can vary based on road conditions and driving style.

The H6 is also only available with one powertrain option — the same 1.5-liter turbocharged 4-cylinder engine that makes 147 hp and 220 Nm of torque. All of that power is sent only to the front wheels via a 7-speed DCT automatic gearbox.

The H6 has McPherson struts up front and an independent double-wishbone suspension at the back. It has disc brakes on all four wheels with ABS, EBD, and BA technology for optimal brakeforce.

Various international automotive outlets have reported the fuel economy of the H6 to be 10.2 km per liter, but the figure can vary based on road conditions and driving style.

The following is a list of convenience and safety features that both SUVs possess.

Prices play a key role in buying decisions. In the case of Jolion and H6, the difference in their prices is actually big enough to sway the decision in the favor of one.

Here are the prices of the two SUVs:

Given that both SUVs have just been launched in the market, and that both are CBUs, there is no telling which of them is better value in terms of long-term ownership. However, on the surface, both their prices seem to be justified.

Both the Jolion and the H6 are the latest-generation vehicles with all the latest features available. Although they are in the same category, the H6 is priced higher than the Jolion for being more refined and better-equipped.

The competition might be tough, but those who appreciate the latest products in the market will gravitate towards these two SUVs. With that said, their futures in Pakistan seems to be fairly bright.

However, when it comes to an individual’s buying decision, that rests with each person’s need and desire. The Jolion offers everything that a car owner needs; but in terms of the desirability factor, the H6 is likely to win for being slightly more special.