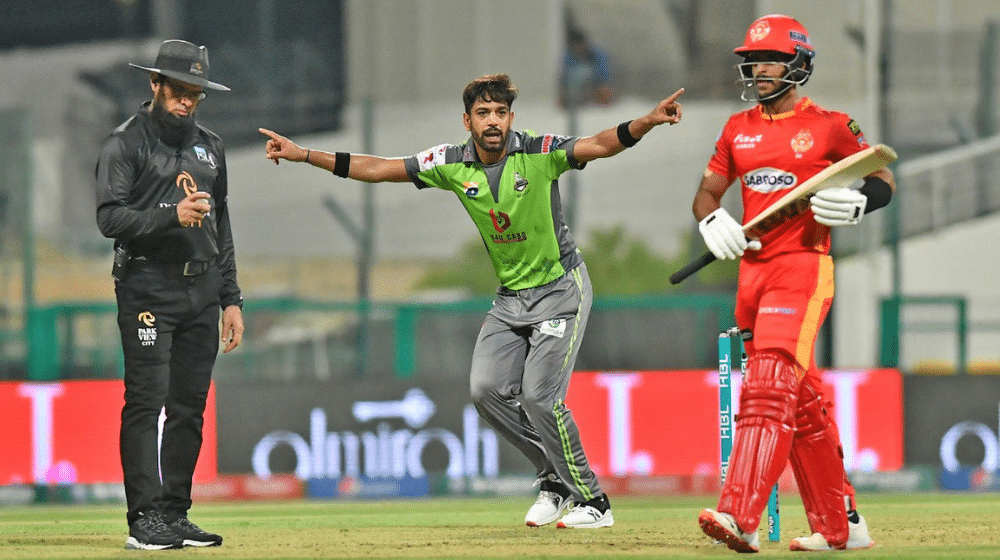 Lahore Qalandars moved to the top of the PSL points table after a last-ball victory over Islamabad United. Lahore’s ace all-rounder, Rashid Khan, took the game by storm after performing with the ball in the first innings and scoring quickfire runs at the back end of the run chase.

United were put into bat first and failed to live up to the expectations after the top order collapsed. A fighting batting display by Faheem Ashraf and Mohammad Waseem Jnr. down the lower order helped them to a respectable score of 143/9 at the end of 20 overs.

Lahore started poorly as well, but a crucial partnership between Sohail Akhtar and Mohammad Hafeez put them in the driving seat in the run chase. Islamabad’s bowlers picked up wickets at regular intervals to choke the Lahore batting lineup. With 16 runs required in the last over, Rashid Khan smacked Hussain Talat for three consecutive fours before Tim David hit the winning runs.

Lahore will face Peshawar Zalmi in their sixth match of the tournament on Thursday at 11 pm.

Pakistan Super League (PSL) will resume with a slobber-knocker as Islamabad United and Lahore Qalandars face off to go to the top of the PSL points table. Both the franchises had a solid start to their campaigns, winning three and losing just one match but with much-changed squads, both the teams will be looking to hit the ground running.

Islamabad has lost the services of their star opener, Alex Hales, along with other crucial players such as Lewis Gregory and Paul Stirling, while Lahore will enter the rest of the tournament without their experienced campaigners, David Wiese, and Samit Patel.

Islamabad will be hoping that Kiwi opener, Colin Munro, can rediscover his old form and provide them with a solid start in the powerplay, while the latest addition to their squad, Usman Khawaja, will be highly crucial in the middle overs phase of the game.

Lahore, on the other hand, has a magnificent bowling lineup led by ace fast bowler, Shaheen Shah Afridi. They will be heavily reliant on Afghanistan spinner, Rashid Khan, and will be looking towards him to provide crucial wickets and some quick runs at the back end of the innings.

Islamabad and Lahore have encountered each other 10 times in PSL history, with Islamabad being the dominant side, winning 8 and losing just two. Lahore will be hoping to turn around their fortunes against the two-time champions.

Islamabad United:
Islamabad-born Australian middle-order batsman, Usman Khawaja, will be making his PSL debut in the upcoming match. While Islamabad will be hoping that he hits the ground running, Khawaja will be looking to make a statement and get his place back on the national side.

With heavy reliance on the spin at Abu Dhabi wickets, Khawaja will be the key to tackle the spinners in the middle-overs and provide the platform for the hitters to score big at the end of the innings.

Sohail Akhtar has been under immense pressure ever since he was appointed as the captain of the franchise. His performances have been poor as of late but a change of venue could provide the catalyst for him to finally come good. Sohail has an excellent record at Abu Dhabi, he scores heavily at the ground and also led Lahore to a title victory in the Abu Dhabi T10 league.