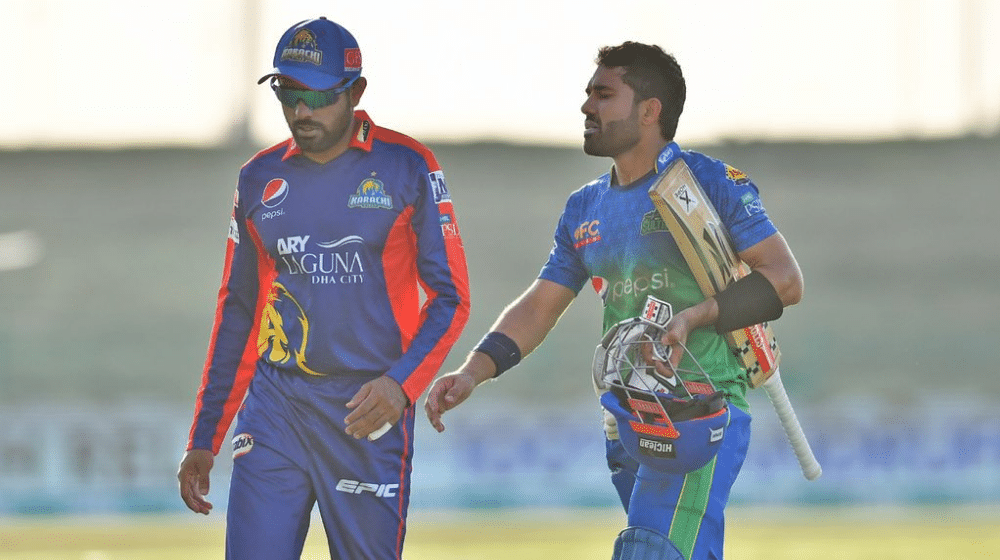 Multan Sultans restarted their campaign by defeating defending champions by 12 runs. Despite the loss, Karachi Kings stayed at the second position, but Peshawar Zalmi have a game in hand over them.

Multan’s middle-order batsman, Rilee Rossouw was named as man of the match for his magnificent batting in the first innings.

Multan started off brilliantly after being put into bat first. After losing opener Rahmanullah Gurbaz cheaply, Multan reconstructed their innings, with Sohaib Maqsood smashing a quickfire 31 to set the tone for the innings. Rilee Rossouw and Khushdil Shah both scored 44 runs in quick fashion to help Multan to a daunting total of 176/5.

Karachi started off poorly, losing opener Sharjeel Khan and one down Martin Guptill early on. Babar Azam smashed 85 off 63 balls but was unable to steer the Kings to a victory. Veteran leg-spinner, Imran Tahir, picked up three crucial wickets, derailing Karachi’s run chase.

Karachi Kings will face Multan Sultans as both the teams look to move upward on the PSL points table. Karachi can move to the top of the table if they manage to defeat the depleted Multan Sultans, who have had a torrid start to their campaign. Kings have won three of their five matches so far, while Sultans have only registered one victory in their five matches.

Multan will be hoping their new signings, Johnson Charles and Shimron Hetmyer can provide them with fireworks at the top of the order and will be relying heavily on their spin duo of Imran Tahir and Usman Qadir.

Karachi, on the other hand, have a much more settled starting eleven, with the likes of Imad Wasim, Mohammad Amir and Babar Azam being the spine of the team. They have added two quality players in the shape of Martin Guptill and Thisara Perera to their already star-studded squad.

Both the teams have encountered each other 8 teams in PSL history. Karachi have an upper hand historically, winning five and losing just once, while the other two matches have ended in no result. Multan will be hoping to turn around their fortunes against Karachi and resume their PSL 6 campaign.

While Karachi have a star-studded squad and any one of their players has the potential to turn the game on it’s head, but the acquisition of Thisara Perera can prove to be a masterstroke. Perera’s medium pace and variations can prove to be very useful at a slow pitch in Abu Dhabi, while his power-hitting at the backend of the innings can change the complexion of the game in just a few moments.

Multan will be looking towards their captain, Mohammad Rizwan, for inspiration. Rizwan has been in sublime form over the past year and is currently the leading run-scorer in this year’s PSL. Rizwan will be the key at the top of the order and also will have huge decisions to make on the field. With his never-say-die attitude, Rizwan can grab the game by the scruff of it’s neck.