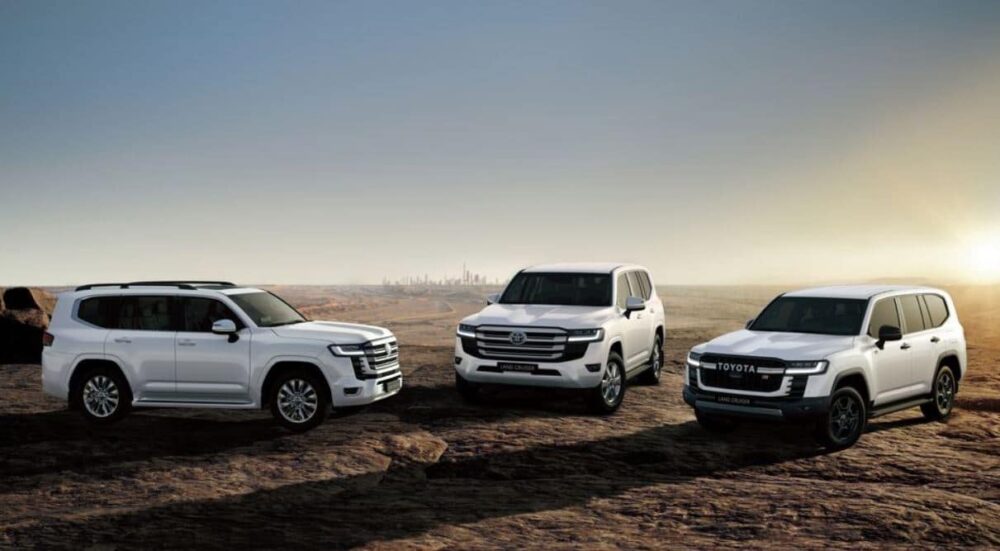 The resilience and reliability of the mighty Toyota Land Cruiser are common knowledge. Owing to its capability to go over the harshest of terrains, the Land Cruiser is considered the gold standard of off-road vehicles, and is placed right next to the kingpins Land Rover Defender and Mercedes Benz G-Wagon.

The ‘Land Cruiser’ is one of the oldest nameplates in Toyota’s lineup of amazing vehicles. It goes back to 1950 when the need for a small and capable off-road vehicle had arisen amid the Korean War. However, since the vehicle was only meant to be used in war situations only, the automaker did not consider branding it to appeal to the public.

After observing the little off-roader’s amazing toughness and potential, the entire world took note of it, resulting in an undeniable demand for it. In 1954, the vehicle went into commercial production for the mass market, and the name ‘Land Cruiser’ was coined for the first time by Toyota’s Technical Director at the time, Hanji Umehara.

Since then, the Toyota Land Cruiser has been one of the most popular off-road SUVs in the world, and is considered the best for its unparalleled grit, longevity, and off-road prowess that gave it a legendary status over time. The older versions of these rather basic SUVs (besides their off-road capabilities that are anything but basic), have become collectibles around the world.

Apple Planning to Partner With BYD for Its Smart Electric Car

Moreover, these vehicles are the best kind of collectibles as they can be driven every day, are extremely reliable, extremely easy to maintain, and do not lose most of their value despite having hundreds of thousands of miles on the clock, which is why they are adored around the world.

On 9 June, the highly anticipated Land Cruiser 300 was finally revealed by Toyota, and while not much has changed on the surface, a lot has reportedly been changed on the inside.

To begin with, the most significant change is that Toyota is finally retiring the massive 5.7-liter V8 dinosaur-eater of an engine in favor of a smaller, more fuel-efficient, more environment-friendly, yet more powerful lineup of turbocharged V6 engines.

Let’s take a closer look at it. 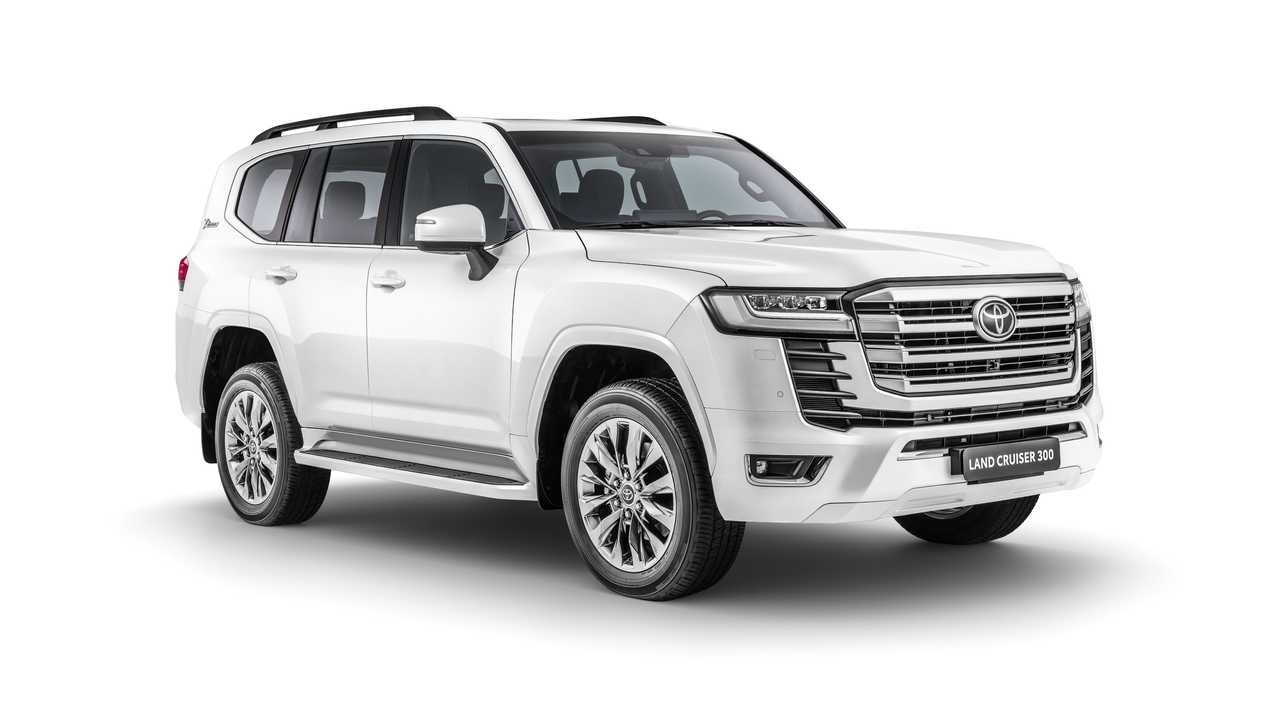 As mentioned before, the all-new J300 Land Cruiser is aesthetically more different than the latest iteration of the J200 Land Cruiser. However, the design has been given a hint of aggressiveness, primarily due to a larger front grille and slightly sharper headlight design.

The side profile of the vehicle is as basic as it gets. It has a typically tall and boxy look on the side, with a slight change in the design of the window next to the D-Pillar. The other difference is in the design of the alloy wheels that are different with each variant. 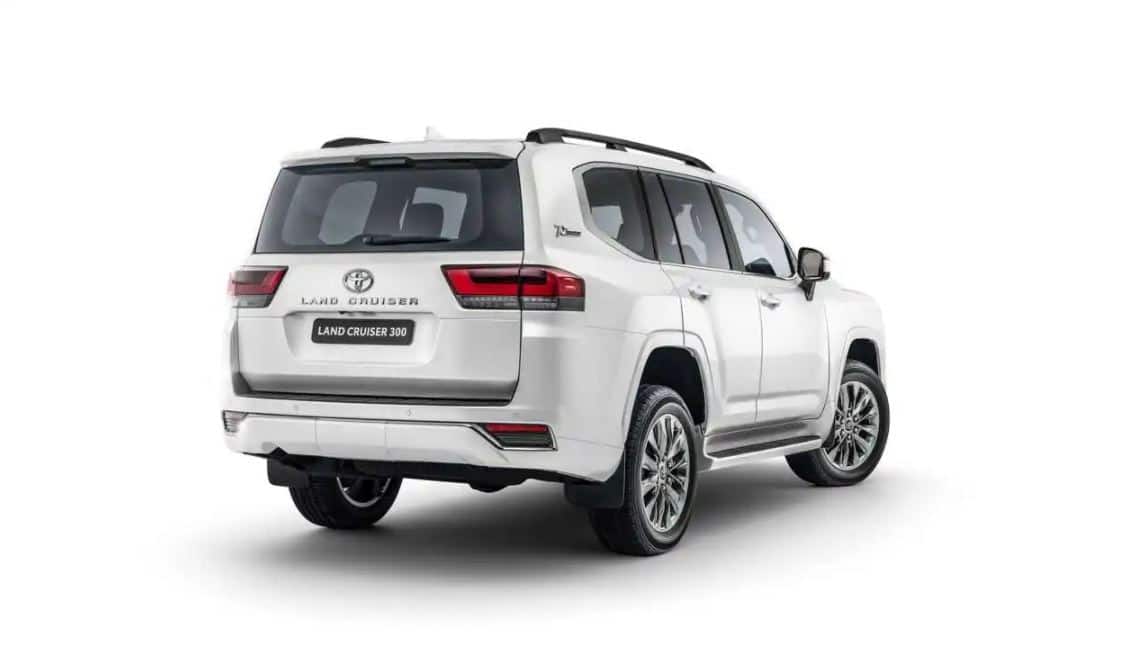 Around the back, the SUV seems slightly different because of a taller, more upright tail. The other difference can be seen in the design of the taillights which are slightly sleeker and pointier than those in the old vehicle.

Overall, the new Land Cruiser is still a simple, yet decent-looking SUV. 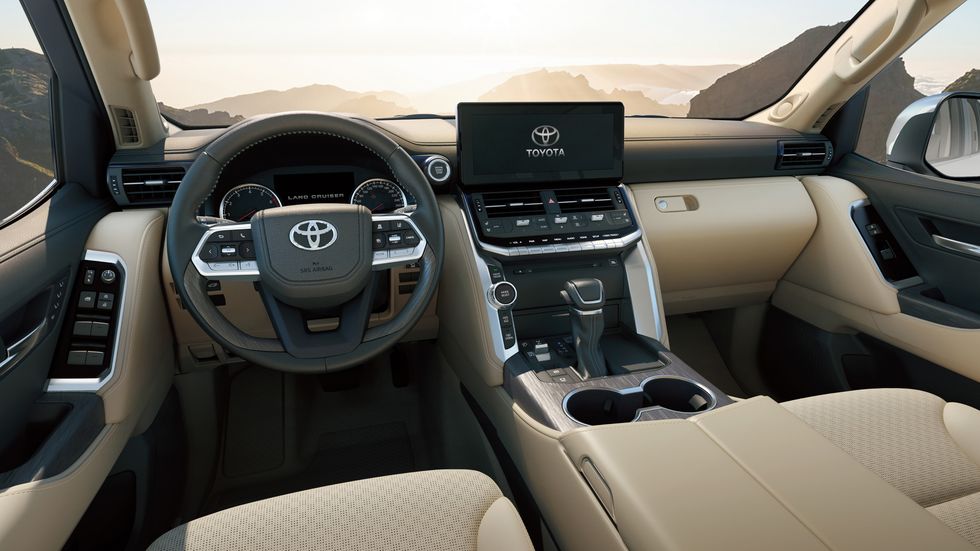 Inside, the new Land Cruiser looks simple but more advanced than its predecessor. A more modern gauge cluster, infotainment unit, steering wheel, center control stack, and other controls allow for a more contemporary feel in the SUV. Furthermore, the videos and photos suggest that the materials used (open-pore wood trim, leather, and brushed aluminum) add to the premium feel. 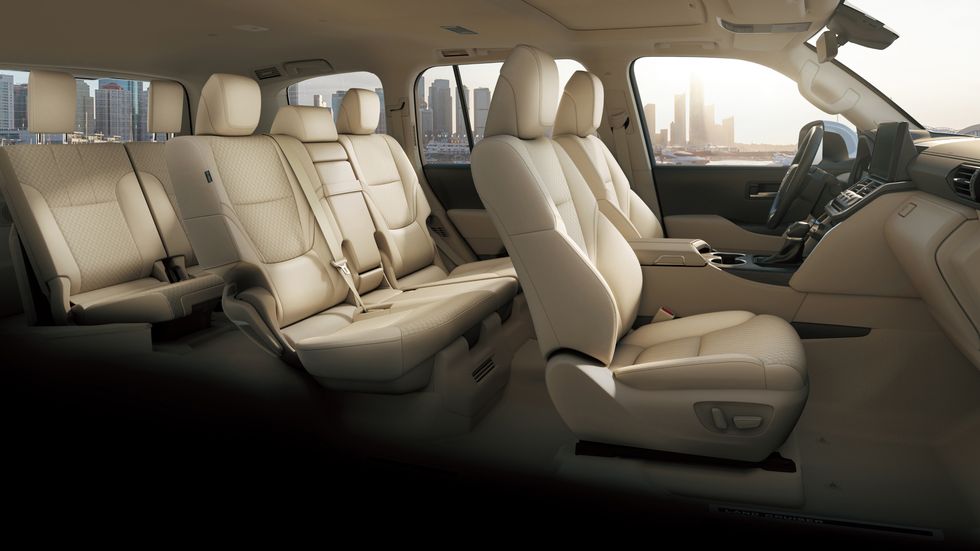 As the new Land Cruiser is still a huge full-size SUV, it can conveniently seat seven passengers. The third and second-row seats can now also fold down to provide a completely flat loading bay if the owner wants to transport large items in the back.

APMDA Suggests Reduction in Taxes on Car Imports in Pakistan

Although the complete list of features has not yet been revealed, the interior seems to have several modern features like powered, heated, and ventilated front seats, quad-zone climate control, wireless charging, power tailgate, 360-degree camera, among other advanced features.

Both engines are to be mated to a 10-speed automatic gearbox. The 4×4 feature is available as the standard across the entire variant range of the vehicle. This is the first time that Toyota has not included a V8 engine in a Land Cruiser since the J80 Land Cruiser of the late 1990s and the early 2000s.

Despite several modern aspects in the new version, the Land Cruiser still remains true to its roots in terms of basic architectural layout. Although the TNGA-F platform for the vehicle is new, it is still a basic ladder-frame chassis whereby the vehicle’s body sits atop a separate frame which, although less refined than a uni-body or a monocoque chassis, is grittier and more reliable than the said chassis.

Furthermore, due to the overall lighter chassis and with the addition of an aluminum roof instead of a steel one, the new Land Cruiser is now 200 kg lighter than the J200 Land Cruiser, which implies that is a better vehicle in every aspect of performance.

Although the old Land Cruisers had been great off-roaders, their on-road mannerisms had been notoriously rough. Toyota has reportedly made a few more changes to fix the issue. The new platform is reportedly stiffer and lower to the ground to ensure less body roll, pitch, and dive on the road.

Furthermore, Toyota has fitted the vehicle with an electronically-controlled adaptive suspension setup that reads the road and surfaces to make the ride better and more controlled. 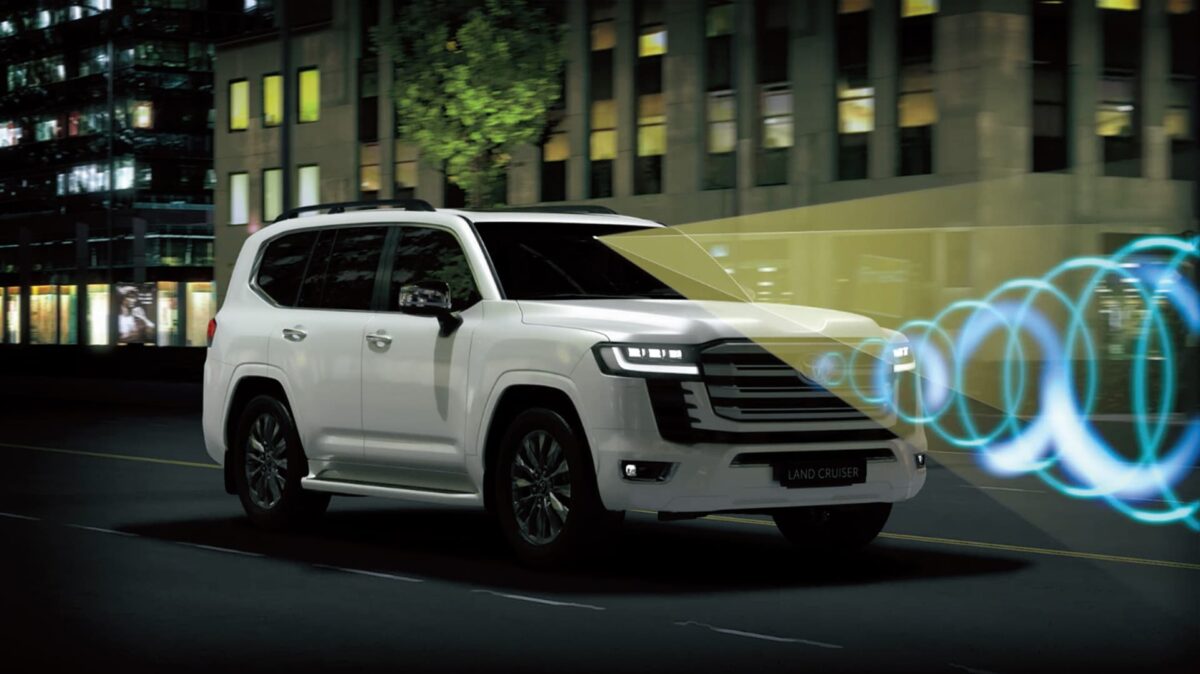 Additionally, the Land Cruiser features an advanced traction control system that distributes power, torque, and brake force to each independent wheel based on which wheel needs it the most.

Other features include Crawl Control, Hill Descent Control, Hill Start Assist, Multi-Terrain Select (which modulates the SUV’s performance to adapt to a particular surface), and Multi-Terrain Monitor  (which allows the driver to assess the terrain obstacles through a front-mounted camera). 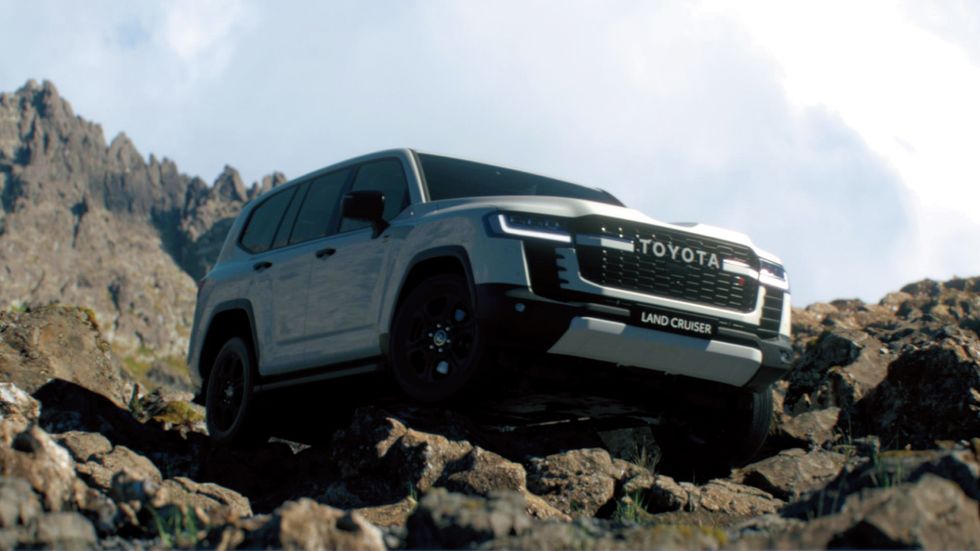 The vehicle will be launched initially only in Russia and the Middle Eastern markets in the third or fourth quarter of the 2021 calendar year. It is also being speculated that the SUV will have a starting price of $100,000, which places it right next to some of the most premium vehicles in the market.

However, regardless of the huge price tag, the Land Cruiser is still one of the favorites in the automotive community due to its capability and reliability, and will most likely be just as desirable as its predecessors all over the world.