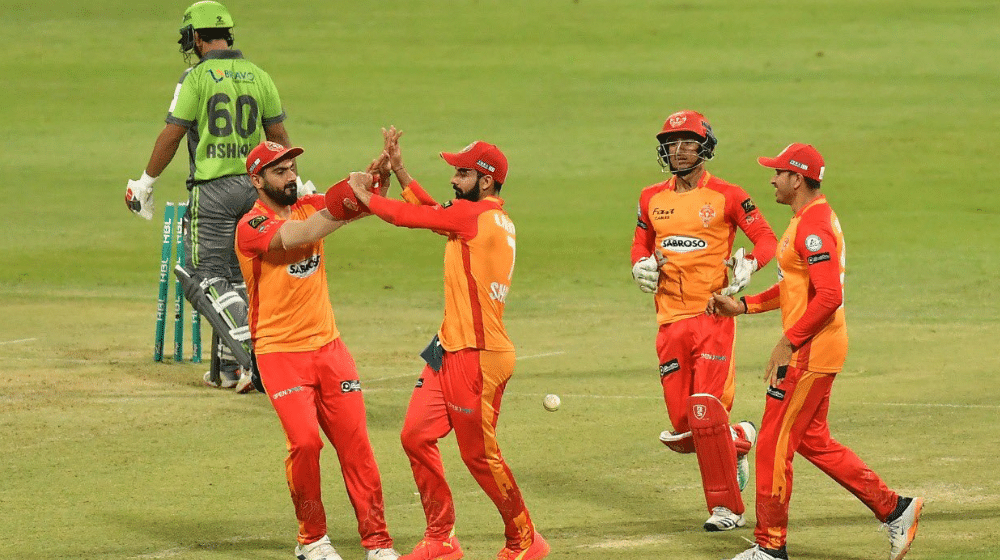 Islamabad staged a magnificent comeback with both bat and bowl as they defeated league leaders Lahore Qalandars by 28 runs. Islamabad’s victory took them to the top of the PSL points table, while Lahore move down to the second spot.

Islamabad’s batting unit collapsed in the powerplay as they were restricted to 20-5 in their six overs. Middle-order batsmen, Asif Ali and Ifikhar Ahmed fought back and put on a century stand to help them post a total of 152/7.

Islamabad’s bowling unit backed up their batting unit and bowled superbly. Lahore had a solid start but suffered a batting collapse of their own, bundling out for 124 in their 20 overs.

Asif Ali was named as the man of the match for his magnificent innings of 75 off 43 balls, including five huge sixes.

Islamabad will be without their star bowler, Hasan Ali, for the rest of the tournament as he traveled back home due to family commitments. Fast bowler, Ali Khan, is likely to be included in the lineup in his place.

Lahore aren’t expected to make any changes to their lineup after two successive victories in the tournament. Star bowler, Rashid Khan, has already win two back to back man of the match awards and will be looking into complete his hat trick.

Islamabad and Lahore have encountered each other 11 times in PSL history, with Islamabad being the dominant side, winning 8 and losing just three. Lahore will be hoping to repeat their recent performance against United.

Colin Munro’s wonderful innings against Quetta helped Islamabad to a comfortable victory and the team will be hoping that he continues his fine form. Munro will be crucial to provide a good start to the team.

Although Rashid has been the man to watch for Lahore, but Hafeez’s form with the bat is a worrisome sign for Lahore. Lahore will be looking towards their veteran batsman to provide crucial runs and get back into his old form.