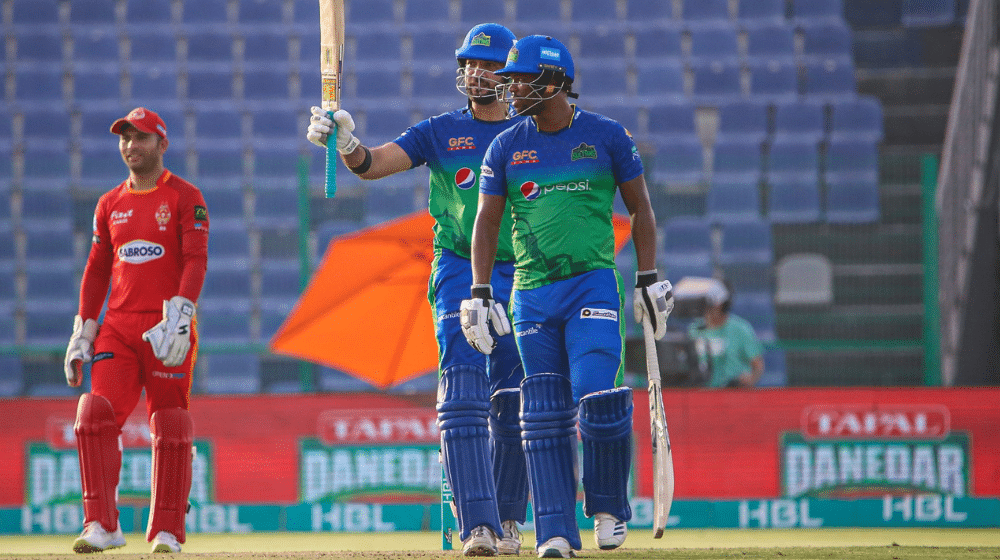 Multan Sultans made their first ever PSL final after defeating Islamabad United by 31 runs in the qualifier. Multan was the superior team in all three departments on the day and stopped the red hot United in their tracks to make it to the final.

Multan got off to a strong start despite losing captain, Mohammad Rizwan, early on in the innings. Sohaib Maqsood and Johnson Charles took the attack to the Islamabad bowling unit and a late flurry from Khushdil Shah took Multan’s total to a challenging 180/5. Hasan Ali and Shadab Khan bowled brilliantly to restrict Multan to under 200, but a 29 run 19th over from Akif Javed turned the tide in Multan’s favor.

Sohail Tanvir was named as player of the match for his figures of 17/3 in 4 overs.

Islamabad and Multan face off in the Qualifier for the PSL final in a highly anticipated encounter. Both the teams were the in-form teams of the Abu Dhabi leg and finished in the top two of the PSL points table. The winner of the contest will qualify for the final, while the loser will get another chance as they will face the winner of the first Eliminator on Tuesday.

Islamabad defeated Multan in their last encounter and will be hoping to repeat the result of the last match. Islamabad are on a five-match winning streak and created history by becoming the first team to win at least eight matches in the group stage. They are expected to make a few changes to their playing eleven and start with their strongest lineup.

Multan, on the other hand, have been the second-best in the tournament so far. They staged a magnificent comeback as they jumped from fifth in the first phase to second at the end of the second round. They are also expected to make changes and field their best eleven.

United and Sultans have encountered each other 8 times in PSL history. Islamabad have won 5 and lost 3. Multan will be looking to narrow the head-to-head record in tonight’s encounter.

Shadab Khan’s form with the ball has been one of the weak points for Islamabad in this tournament. His leadership skills, on the other hand, have been a revelation and Islamabad will be hoping that Shadab brings his ‘A’ game in all three departments in the crucial encounter.

Imran Tahir is one of the leading T20 spinners in the world. He has been on the money in the Abu Dhabi leg so far and Multan will be hoping that he continues his great work. Tahir will be crucial in taking wickets and choking the run rate of Islamabad in the middle overs.