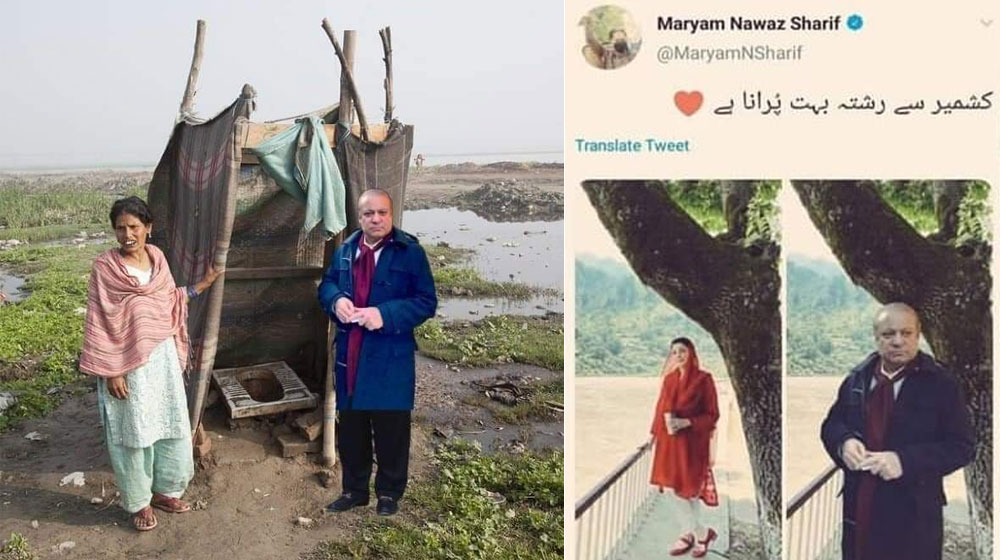 The vice-president of Pakistan Muslim League-Nawaz (PML-N), Maryam Nawaz, has once again put herself in an embarrassing situation over a blunder.

Maryam posted a photoshopped picture of herself and her father Nawaz Sharif standing beside a river in Kashmir while the caption read, “Relationship with Kashmir is ages old.”

The bid to play “Kashmir card” went wrong for the PML-N leader when within minutes, netizens caught the blunder and proved that the image is photoshopped.

Although Maryam took the tweet down immediately after realizing the mistake, Twitter was not in a forgiving mood. A screenshot of her tweet was shared by the official handle of Pakistan Tehreek-e-Insaf, and since then, it has been the new meme material for social media users.

Netizens are also pointing out the absurd photoshop skills used in the photo. The Neelam Valley landscape, the flow of the river beneath, the tree, and even the leaves on it are unchanged. Moreover, Sharif’s image was photoshopped as it is on Maryam’s photograph, sending the Pakistani Twitter into a frenzy.

Here are some of the funniest memes on Twitter:

It is not the first time that Maryam Nawaz has landed in hot waters through “forging blunders.” Previously she was titled “Calibri Queen” for using the Calibri font to disclose her ties to the British Virgin Island’s firm in 2006 in a forged statement. Whereas Microsoft only made the font publicly available in 2007.