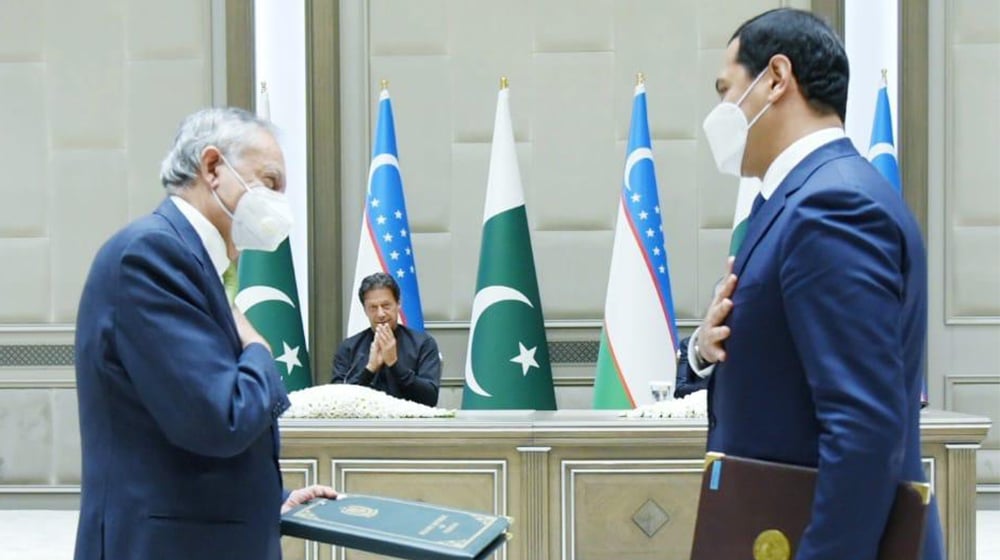 The Ministry of Commerce and Trade Development Authority of Pakistan organised the Pak-Uzbek Business Forum in Tashkent, Uzbekistan on 15th July, 2021.

Prime Minister of Pakistan, Mr. Imran Khan, inaugurated the business forum. The purpose of this initiative was to bring the businessmen of Pakistan and Uzbekistan under one roof to explore ways to enhance trade and investment.

Advisor to the Prime Minister on Commerce, Mr. Abdul Razak Dawood, presented bilateral trade opportunities and signed MOUs and the Transit Trade Agreement. He emphasized the importance of cooperation in enhancing trade and investment. He also met with different Uzbek and Pakistani delegates, chambers and associations and discussed possible ways to increase bilateral trade and investment.

As part of the vision of the present government, to make Pakistan a trade, transit and trans-shipment hub, and enhance regional connectivity with Central Asia, Pakistan provides the shortest route for trade.

He highlighted importance of Pakistan’s geo-strategic location, a market of 220 million people and access to Central Asian states through Uzbekistan.

Salient Features of the Proposed AUPTT 2021

Under the Agreement, Transit trade between Uzbekistan and Pakistan will take place along pre-determined routes and only utilizing specified ports and border crossings. Uzbekistan and Pakistan are obligated to ensure that suitable infrastructure and personnel are available at border crossings and will provide separate spaces for off-dock terminals and warehousing, at entry/exit points and other customs notified places, on reciprocal basis.

While each country remains responsible for licensing transport operators (e.g., trucking firms) registered in their territory, Uzbekistan and Pakistan would issue Road Transport Permits on the basis of which, transport operators will be able to transport goods through the other country’s territory.

That is, Uzbek trucks may carry goods via Pakistan to sea ports rather than having to re-load them onto Pakistani trucks at the Afghanistan-Pakistan border and vice versa.

The Uzbek government shall recognize Pakistani driver’s licenses and vehicle registration documents, and vice versa. The Uzbek and Pakistani governments shall expedite and simplify the process for awarding multiple-entry visas to truck drivers from one another’s countries. With the exception of selected perishable items, goods transiting through Uzbekistan and Pakistan shall be stored in sealed containers meeting international specifications. The Uzbekistan-Pakistan Transit Trade Coordination Committee (UPTTCC), which will be established under the AUPTT, would be responsible for monitoring and facilitating the implementation of the agreement. Grievances Redressal, Dispute Settlement and Arbitration mechanism are available in the Agreement.

The Agreement has four Protocols of which:

TDAP organized fruitful B2B Meetings of the Business Delegation with their Uzbek business counterparts. Textile, Chemical, Fruit and Vegetables and Rice sector got export orders from this business forum.

An exclusive interactive session of Prime Minister of Pakistan, Mr. Imran Khan, with Pakistani delegates was organized to discuss trade issues and possible ways to enhance bilateral trade between Pakistan and Uzbekistan.

The Business community expressed great enthusiasm regarding the enhancement of trade and economic relations between the two nations, and the visit of the delegation was generally remarked upon as a milestone for the opening of the best possible avenues of cooperation in trade and investment ties between Pakistan and Uzbekistan.