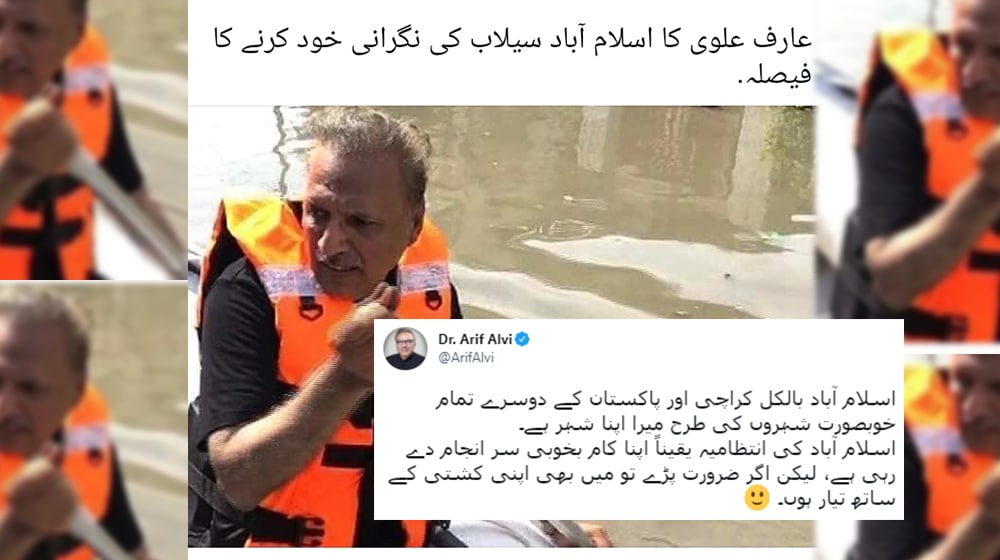 Although the authorities in Islamabad have successfully cleared all highways and streets from rainwater on the back of a massive Monsoon downpour on Wednesday morning, President Arif Alvi has refused to sit idle and instead wants to help as well.

Making the announcement on Twitter, President Alvi fashionably remarked his love for Islamabad, comparing its beauty with other “lovely cities of Pakistan”. He even posted a picture of himself rowing a boat in Karachi in 2017

Islamabad is my city just like Karachi and all other lovely cities of Pakistan.
I am confident that Islamabad's administration are doing their job well but if need be, I am ready with my boat 🙂 pic.twitter.com/whOskBKsNf

He further stated that “Islamabad’s administration are doing their job well but if need be, I am ready with my boat”.

While the President’s intentions are commendable to say the least, netizens have pointed out that he’s trying to mirror the heroics of the ex Punjab Chief Minister, Shahbaz Sharif, who himself was quite well known for his displays of “public affection”.

President is following the ex CM of Punjab 😂

@ArifAlvi sab that's the next level.

While the underlined jokes about making appearances are well-founded, a few serious Twitteratis requested the President to visit the homes of those citizens who were left devastated by the flash flooding.

Mr President can you imagine the pain of mother & son who are dead in E-11 after drowning down in flood & will you visit their home to wipe the tears of the grand parents.

Hope you have a heart.

Got anything to add? Hit the comment section to let us know.