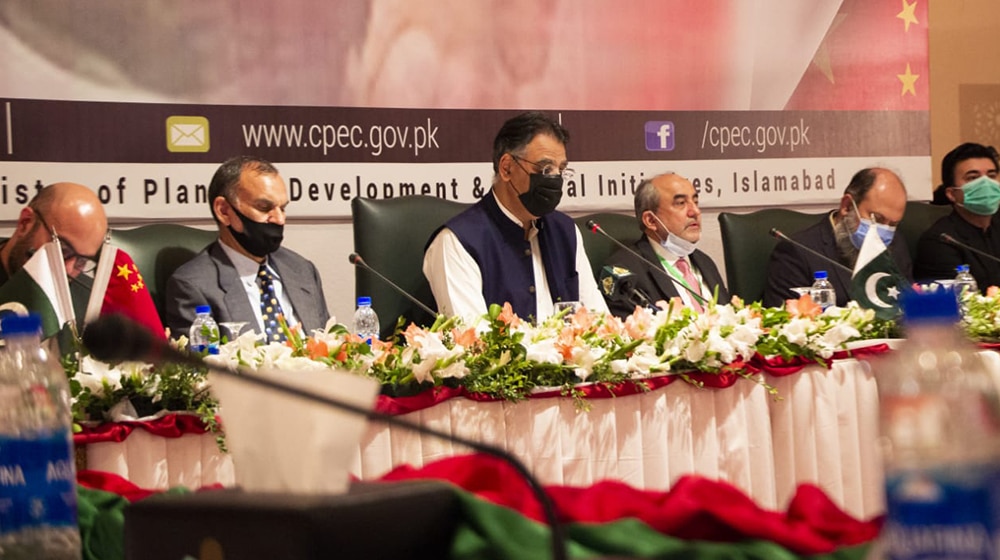 The 10th meeting of the Joint Cooperation Committee (JCC) on the China Pakistan Economic Corridor (CPEC) was held in Islamabad through video conference.

In his opening remarks, while welcoming the participants, the Federal Minister, Asad Umar, congratulated his Chinese counterpart on the 72nd Foundation Anniversary of the People’s Republic of China and the 100th Anniversary of the establishment of the Communist Party of China.

Minister said that it is a matter of satisfaction that both China and Pakistan have been able to deal with the COVID pandemic effectively. He thanked the Chinese government for unprecedented support to Pakistan in our efforts to combat COVID-19. It has been a true testimony to our iron brotherhood and a reflection of our historical strategic partnership. He said that CPEC cooperation and work on all projects continued unhindered despite the Pandemic, mainly due to the resolute commitment of top leadership and workers from both sides.

He said that Phase-2 of CPEC is even more promising as it broadens the scope of cooperation and focuses on Industrial, Scientific and Technological, as well as Agricultural cooperation. He emphasized that we are working to ensure stable policy, ease of doing business, and better incentives for private sector participation for a sustainable development model. The Prime Minister has already issued directions for empowering SEZ Authorities and Management Companies to provide full facilitation to investors. It has also been decided to establish a dedicated Investor Facilitation Centre for Chinese investors. He said that Government was cognizant of the threats to CPEC and had enhanced the security arrangements to deal with threats in an effective manner.

During the meeting, the conveners of the JWGs on Energy, Transport Infrastructure, Gwadar, Socio-Economic Development, Security, Long-Term Planning of CPEC, Industrial Cooperation, International cooperation, Science & Technology, and Agriculture Cooperation made a presentation highlighting the progress in their specific areas and the future plans of actions.

During the proceedings, the MOU for the establishment of a Joint Working Group (JWG) on the Information Technology Industry was signed by both sides. Letter of Exchange of Provision of Balochistan Solar Power Lighting Equipment and Provision of Medical Equipment and Material was also signed. The JCC also announced the signing of MoU on Karachi Coastal Comprehensive Development Zone (KCCDZ) and Agreement of Cooperation Framework between Ningbo Port and Gwadar Port, as well as Lease deed of Gwadar Expo Center.

The Vice-Chairman NDRC appreciated the holding of the JCC meeting despite the COVID-19 Pandemic. He stated that after successful completion of phase-1 of CPEC, high consideration is being given to industrial cooperation, Agriculture, Science and Technology, and socio-economic cooperation. He highlighted that bilateral economic cooperation is picking up pace in the second phase of CPEC for the mutual benefit of both brotherly countries.

The Chief Ministers of the Provinces, while speaking on the occasion expressed their satisfaction with the progress of the projects and made suggestions for new projects. They also expressed their full support for the CPEC initiative.

The meeting was concluded with the closing remarks by Asad Umar while thanking the Chinese side. He said that substantive progress on all dimensions of CPEC had been made, which reflects the immense hard work devotion, and commitment to the project from both sides. He mentioned that this JCC meeting has been successful in exploring new avenues of cooperation and broadening and deepening under the leadership of Prime Minister Imran and President Xi Jinping. He said with the CPEC second phase accelerating, the economic ties between the two friendly neighbors will continue to get stronger and stronger.

The meeting was attended by Federal Ministers, Chief Ministers of the provinces, Prime Minister of AJK, Special Assistant to Prime Minister on CPEC Affairs, Federal Secretaries and Senior Officials of various Ministries as well as senior officials of all the relevant Ministers and representatives from the Chinese side.

The meeting was co-chaired by Mr. Asad Umar, Minister for Planning, Development & Special Initiatives, and Mr. Ning Jizhe, Vice Chairman of the National Development and Reform Commission (NDRC) of the People’s Republic of China.