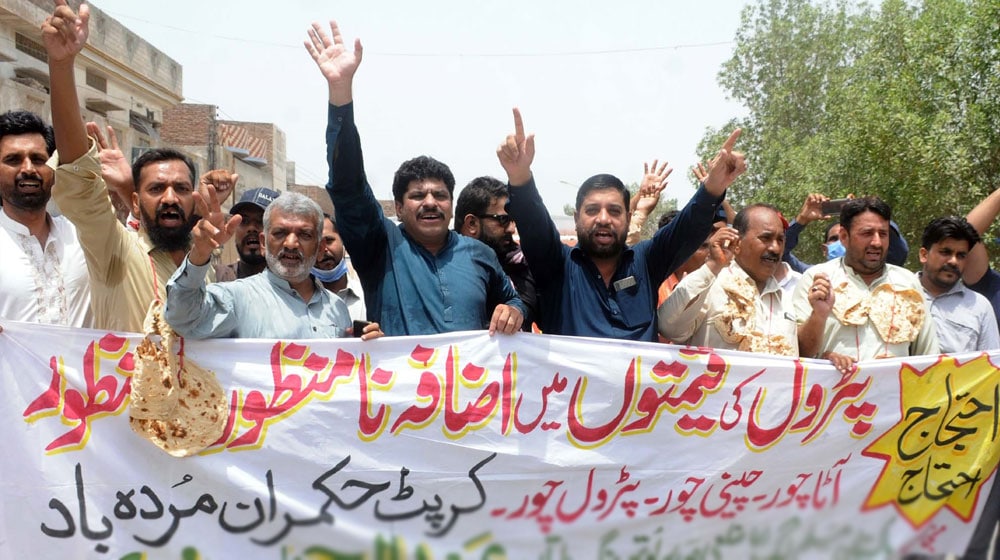 All Pakistan Traders Association (Punjab) has announced a long march towards the Parliament after 12th Rabi-ul-Awal to protest the surge in prices of petroleum products.

The association president, Shirjeel Mir, said that a massive hike in petrol prices would lead to a rise in inflation across the country. He urged the government to withdraw the notification or else they will carry a protest rally towards Islamabad.

Similar announcements were made from the All Pakistan Clerks Association (APCA) President, Haji Muhammad Irshad.

He said that he would start ‘a revolution’ against the present government from Wednesday, 20 October.

Government employees from all four provinces would reach Islamabad for a long march towards the Parliament House. The increasing POL prices, inflation, unemployment, and deteriorating law and order situation have broken the back of the common man,” he said.

Transporters have also announced a strike against skyrocketing petrol prices. Several trade unions have asked public and opposition parties to join their protest against inflation after the 12th Rabi-ul-Awal.

“If the PTI government wants to stay, it should mend its policies, otherwise, this system would collapse anytime,” he warned.

“I am inviting the common public and all opposition parties to participate in the long march,” he said.

The recent decision to raise the petrol prices by Rs. 12.49 coupled with a surge in power tariff by Rs. 1.68 has attracted the public’s ire.

Wagon owners and drivers protested in the twin cities while public transport operators in Rawalpindi have called a meeting to discuss the situation. A future course of action will be announced later today.

Similarly, Pakistan Oil Tankers Association and the All Pakistan Truck and Trailer Association have rejected the hike in prices of petroleum products.