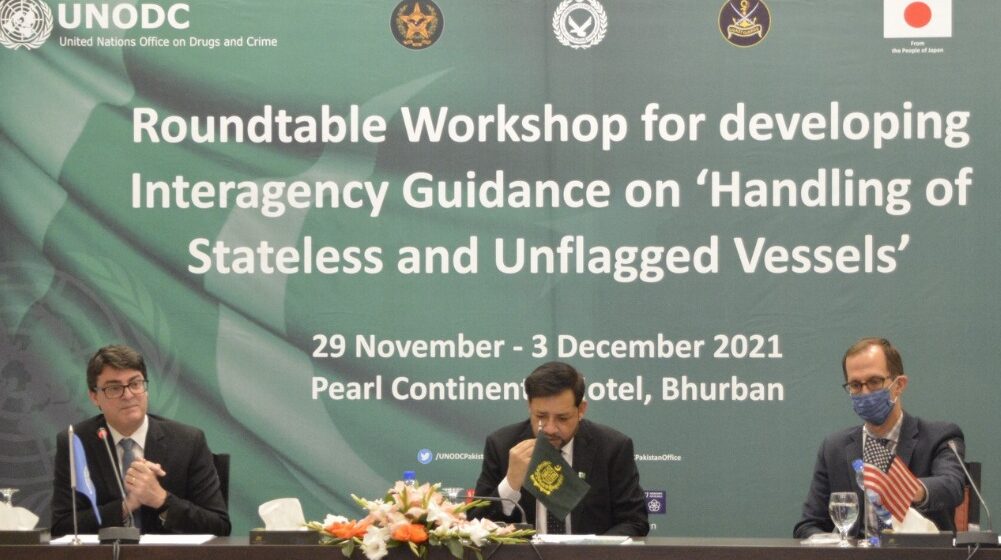 A five-day roundtable workshop for the maritime law enforcement agencies continued for the fourth day on Friday. The workshop aims to strengthen national action against drugs trafficking and smuggling of contraband items through Pakistan’s coastal areas and maritime domain.

The Anti-Narcotics Force (ANF), Pakistan Customs, and the Pakistan Coast Guards (PCG) are participating in the workshop titled, ‘Improved National Response against Drugs and Contraband Trafficking in the Maritime Domain’ continuing under the aegis of the United Nations Office on Drugs and Crime (UNODC) Country Office in Pakistan (COPAK).

Being facilitated by an international expert from UNODC’s Global Maritime Crime Program (GMCP), the workshop contains extensive legal and technical discussions among ANF, Pakistan Customs, and PCG, around the existing and emerging challenges of illicit trafficking and smuggling and on forming an integrated response in the maritime domain.

In his remarks during the inaugural ceremony, Federal Secretary, Ministry of Narcotics Control Dr. Syed Kaleem Imam highlighted Pakistan’s role as the first line of defense against the massive flow of opiates and their derivatives, synthetic drugs, and new psychotropic substances to Pakistan – both for domestic consumption and transnational trafficking to rest of the world. He underscored the implementation of counter-measures as envisaged in Pakistan’s Anti-Narcotics Policy 2019.

In his address, Representative UNODC COPAK Dr. Jeremy Milsom highlighted the existing and emerging trends in drug trafficking, human trafficking and migrant smuggling (HTMS), and smuggling of other contraband items. Originating from Afghanistan, they create governance and security challenges in Pakistan and the wider region. He emphasized the need to improve interagency and regional cooperation to effectively respond to these challenges, especially in the backdrop of recent political developments in Afghanistan. He explained that the workshop seeks input from the participating law enforcement agencies to embed international best practices into Pakistan’s maritime law enforcement procedures.

“In this sense, the workshop will contribute towards the creation of a maritime working group, within the frameworks of Pakistan’s Inter-Agency Task Forces and Working Groups on counter-narcotics, HTMS and anti-smuggling,” he said.

Director US Bureau of International Narcotics and Law Enforcement Affairs Mark Tervakoski thanked Pakistan for making concerted efforts in curbing the flow of narcotics as the main transit country neighboring Afghanistan. He acknowledged the role played by the ANF and other Pakistani law enforcement agencies. He noted that there is a need to enhance technical capacity for detecting, deterring and disrupting drug trafficking proactively. He also appreciated the close relationship between Pakistan and the U.S. in their fight against drug proliferation.