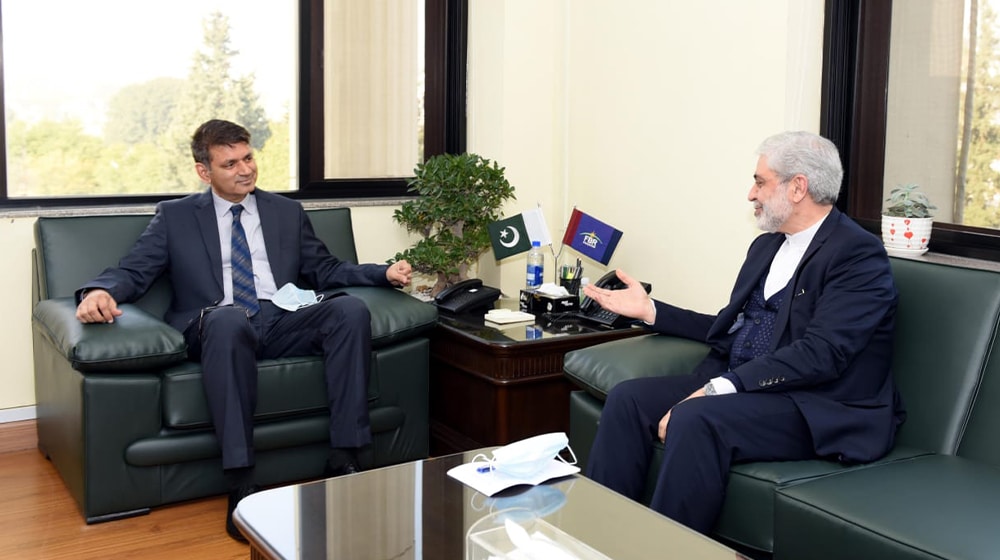 During the meeting, matters relating to cooperation on taxation and customs between Iran and Pakistan came under discussion.

H.E. Ambassador of Iran suggested increasing the effective working hours at the Mand-Pishin border. He further proposed that the Iranian side is ready to increase border gate timings at Taftan-Mirjawa and expected the same action from Pakistan. Chairman FBR endorsed the suggestion of the Ambassador and informed that FBR had already taken up the case with the Government of Balochistan to coordinate with Iranian Authorities for increased opening and working hours of border crossing, especially at Taftan-Mirjawa.

The visiting dignitary also highlighted that the movement of Iranian vehicles is restricted to Taftan whereas Pakistani vehicles were allowed inside Iran on TIR. Chairman FBR clarified that the movement of Iranian vehicles was restricted at the direction of NCOC due to the pandemic. “FBR has already taken up the case with NCOC to review the above decision,” Chairman further added. The Iranian Ambassador also pointed to the lack of facilities for Iranian drivers at Taftan.

To this, the Chairman assured that Director General NLC will be requested to address this issue as soon as possible. The visiting guest also apprised the Chairman FBR about the lack of infrastructure at Gabd and Mand border crossing points. The Chairman FBR informed the Excellency that the PC-I for Gabd/Mand was being prepared by NLC which will be followed by FBR for early processing.

Chairman FBR also directed his team to write to DG NLC for the provision of storage capacity/tanks of LPG at Taftan as highlighted by the Iranian Ambassador during the meeting.

The visiting dignitary appreciated the pivotal role of FBR as Pakistan’s premier revenue collection agency and commended its outstanding performance both in revenue collection and broadening of the tax base. Chairman FBR thanked H.E. Iranian Ambassador for visiting FBR and assured him of his fullest cooperation in strengthening the trade ties between the two countries.