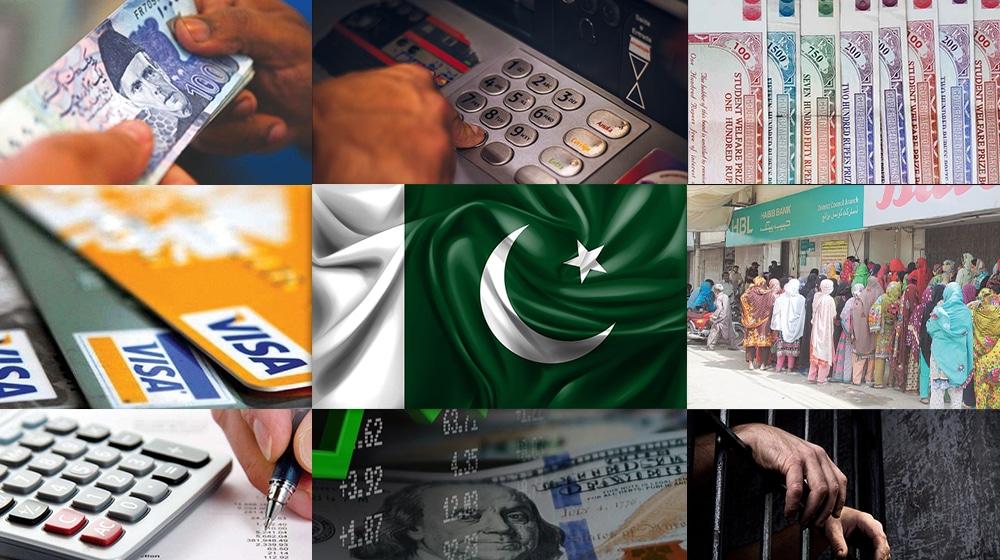 The assets of the banking sector surged by over 20 percent on a Year-on-Year (YoY) basis to reach Rs. 28.7 trillion by the end of the third quarter of 2021, whereas it grew by 2.12 percent from the previous quarter, according to the State Bank of Pakistan.

The asset expansion was predominantly due to the contribution by the domestic private sector advances that had increased by 3.8 percent during Q3CY21 (16.6 percent increase YoY) to reach Rs. 9.1 trillion against a contraction of 0.5 percent during the corresponding period last year.

The increase in advances remained broad-based, reflecting a general recovery in economic activity as well as the impact of higher input prices. The healthy growth in the credit of the private sector is quite encouraging, as it will prop up the low credit incidence in Pakistan as measured by the domestic private credit to the GDP ratio.

The State Bank of Pakistan’s refinance schemes that were announced in the wake of the pandemic, and particularly the Temporary Economic Refinance Facility (TERF), have been supporting the growth of the private sector credit in the last few quarters. However, the banks have increased the credit disbursements from their own sources during the July-September 2021 quarter, and the trend continues post-quarter.

Construction and housing finance also emerged as notable sectors, which are witnessing a favorable increase in credit off-take. More importantly, the SBP assigned targets for housing finance to the banks in July 2020 and the Government of Pakistan Markup Subsidy Program for Housing Finance (also known as the ‘Mera Pakistan Mera Ghar scheme (MPMG)) announced in October 2020, played a key role in enhancing the overall credit to the housing sector.

The banks are actively participating in these initiatives to increase the mortgage finance that will help a greater portion of the population in the construction and purchase of houses.

On the funding side, deposits increased by 0.36 percent during the quarter as compared to 0.80 percent growth in the same period of the previous year. On a YoY basis, the deposits attained an encouraging growth of 16.9 percent to stand at Rs. 20.5 trillion. The investment of the banking sector also recorded a healthy growth of 26.7 percent YoY and 2.7 percent growth from the last quarter.

The trends in the key financial soundness indicators remained encouraging. The banking sector’s credit risk indicators improved further as the gross Non Performing Loans (NPLs) to total loans ratio decreased to 8.8 percent by the end of September 2021 from 9.9 percent in 2022. This improvement came on the back of a rise in loans and lower fresh delinquencies.

An increase in provisioning against the NPLs allowed the provisions coverage ratio to improve to 88.9 percent by the end of Q3CY21 as compared to 84.6 percent a year earlier. 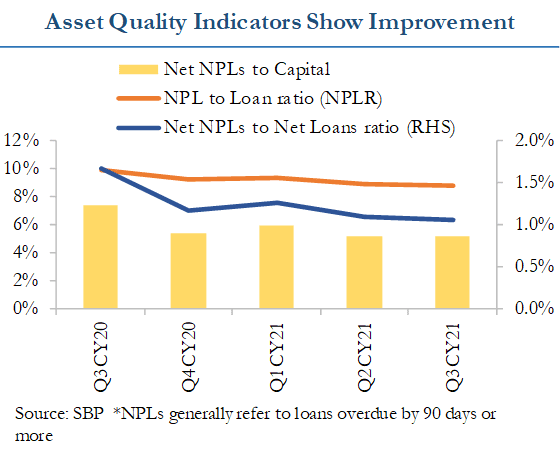 Accordingly, the net NPLs ratio declined to 1.1 percent at the end of Q3CY21 from 1.7 percent in Q3CY20, indicating a lower residual risk to solvency from delinquent loans. The NPLs stood at Rs. 877 billion, and the earning indicators of the banking sector had some moderation during Q3CY21 as the Return on Assets (ROA) stood at 0.95 percent in Q3CY21 as compared to 1.13 percent in Q3CY20.

The solvency of the sector remained strong as the Capital Adequacy Ratio (CAR) at 17.9 percent stayed well above the minimum domestic regulatory benchmark of 11.5 percent and the global standard of 10.5 percent. The quarterly stress test results also reveal that the banking sector is likely to remain resilient even under reasonably severe economic shocks over a protracted period of time.

The banking sector overall profit stood at Rs. 192 billion by the end of three quarters of 2021 as against the Rs. 194 billion reported during the corresponding period of the previous year, showing a slight decline of Rs. 2 billion.