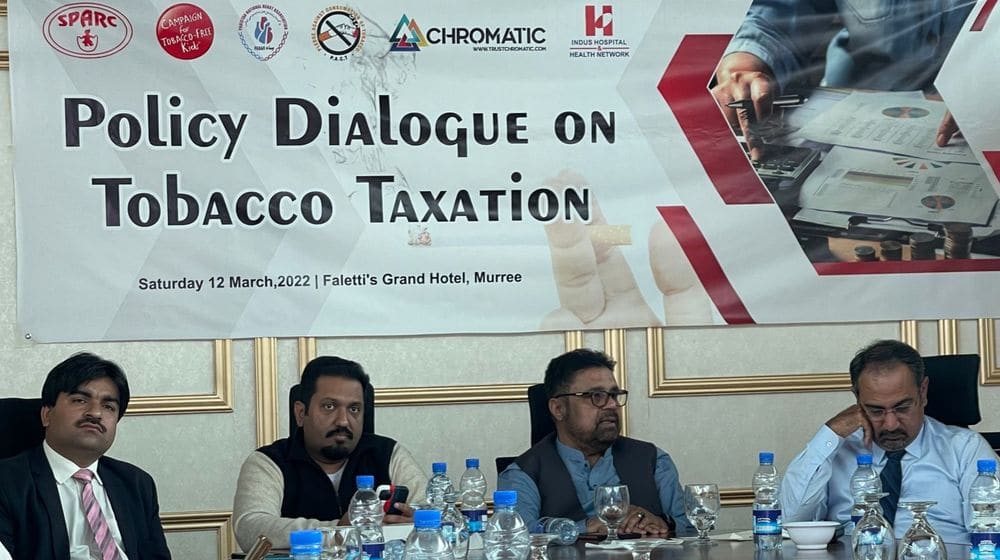 Health experts, tobacco control activists, and members of civil society have urged the government to increase tax on the tobacco industry up to 30 percent in the upcoming Federal Budget.

The unanimous demand came from a concerned group of professionals at a policy dialogue on Tobacco Taxation organized by the Society for the Protection of Rights of the Child (SPARC) in Murree.

Showing grave concerns over the rising number of cigarette smokers in the country, the speakers have demanded the Ministry of Finance and the Federal Board of Revenue (FBR) to increase the tobacco tax by 30 percent as it would contribute significantly to discouraging smoking, especially among the young.

Addressing the policy Dialogue, Country Head Campaign for Tobacco-Free Kids, Malik Imran Ahmad, said that smoking is a silent killer in our society, with 29 million active smokers. Of which 170,000 die each year because of tobacco-related diseases. Besides being deadly substance tobacco causes a health burden of Rs. 615 billion because of loss of productivity and tobacco-related diseases while the revenue collected from the tobacco industry is only Rs. 120 billion.

He said that higher taxes on tobacco are essential to mitigate this burden. “Unfortunately, in the last three years of Prime Minister Imran Khan government, taxes could not be increased because Tobacco Industry misleads the government with illicit trade figures. Increasing taxes on tobacco is the most effective policy to reduce consumption and generate additional funds for the government,” he added.

He further said that Pakistan should increase the excise rates by at least 30 percent on cigarettes to ensure the reduction in cigarette consumption and the growth of tobacco revenue.

ALSO READ
Philip Morris Has Reduced its Carbon Footprint by 30%

Former Technical Head Tobacco Control Cell, Ministry of Health, and Former Technical Focal Person of Government of Pakistan to WHO Framework Convention on Tobacco Control (FCTC), Dr. Ziauddin Islam, while speaking to the policy dialogue said that tobacco consumption among youth in Pakistan is unacceptably high, and their use of this addictive product is harming their mental and physical health.

Pakistan’s young people make up 64 percent of the population, which can easily become a target for the tobacco industry. He further stated that approximately 1,200 children between the age of 6–15 years start smoking every day (Tobacco Control Cell Factsheet). “Youth is the key target of the tobacco industry, while the tobacco industry considers adolescents as a replacement for smokers dying of tobacco use,” he added.

He explained that regrettably, cigarettes in our country are available at the cheapest rates in the region, which makes them affordable for youth. He demands raising tobacco taxes, as children are price sensitive, increasing tobacco taxes to 30 percent will help prevent youth from smoking, he added.

Program Manager Society for the Protection of the Rights of the Child (SPARC), Khalil Ahmed Dogar, said it is necessary to engage the media to help report the harms of smoking and support tobacco control policies. This tactic remains vital as the rise of social media and rapid circulation of misinformation threaten trust in public health advice.

The media needs to play its role and highlight the violations of tobacco control policies and expose the deceptive tactics of the tobacco industry. The government needs to adopt a National Tobacco Control Policy that ensures the reduction in tobacco consumption, improved public health, and guaranteed child education and nutrition, he added.