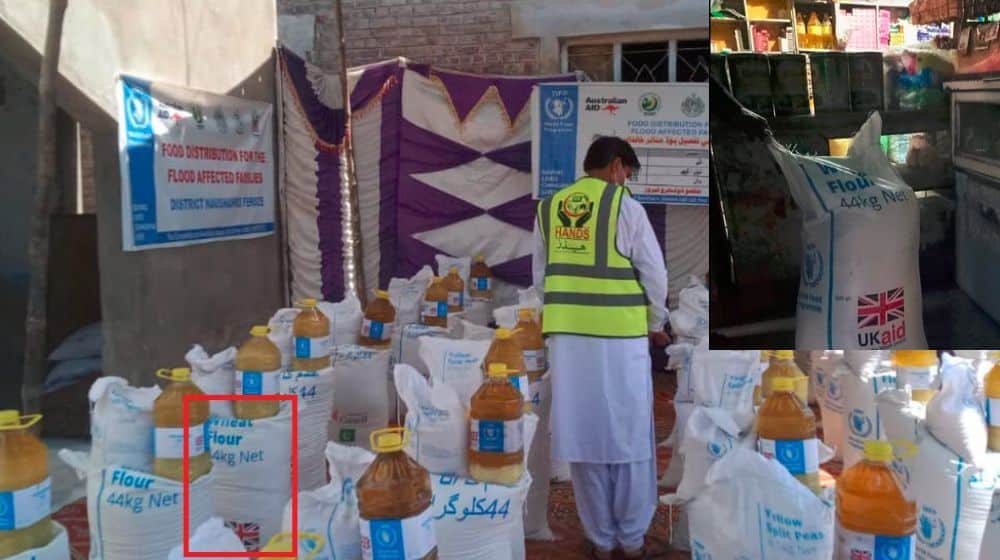 The recent floods have wreaked havoc in Pakistan. More than half of the country’s total land has been affected and over 15% of the total population has been displaced.

While the economic losses have surged to $18 billion, relief efforts by national and international stakeholders are well underway for the rehabilitation of flood victims.

Financial and materialistic assistance is being provided to the flood-affected population. However, reports of misuse of the aid are also emerging from the flooded areas.

Recently, an image went viral on social media platforms, apparently showing a bag of flour donated by the UK Aid placed in a shop located in Sindh.

The image was originally shared by a Sindh nationalist, who is known for his social awareness activities and poetry, on 10 September. The image gave off an impression that aid from the international community is being sold in the province.

Here is the image.

Digital enhancement of the image shows different products of various brands that are commonly seen in the province.

Moreover, Twitter and Facebook remove all EXIF data associated with an image that is uploaded to these platforms, and it is not possible to extract forensic data from an image on these platforms.

Since these brands are local to Sindh and Twitter and Facebook remove EXIF data from the images, the proposition of the image coming out of India, as claimed by most media outlets, goes out of the equation.

On the other hand, authorities have claimed that UK Aid has not sent any aid consisting of flour bags for the flood victims.

Clarification:
There is no authenticity in the news circulating on SM about selling of flourbags recived from UK. As Govt of Pakistan & NDMApak has not recived any aid from United Kingdom containing/consisting of flour bags.

However, an NGO named ‘HANDS Pakistan’ shared an image on Facebook on 11 September, showing similar bags of flour placed in a camp apparently organized in collaboration with the World Food Program (WFP) in Naushehro Feroze, Sindh.

Here are the images.

Besides the UK, Canada and Japan have also joined hands with WFP to provide edibles to the flood victims.

Although the original uploader of the image claimed that the aid is being sold in the market, there is no evidence to corroborate the authenticity of this claim.

As far as the location of the image is concerned, it is from Sindh as there are many other products that are sold commercially in the province, and Facebook and Twitter have not enabled the extraction of EXIF data.

Where the placement of the flour bag in a shop is concerned, it is entirely possible that one of the recipients of the aid is a shopkeeper and shared a photo to acknowledge the relief efforts. The context of the image cannot be presumed just because it was captured in a shop.

As far as the official claims of not receiving UK Aid comprising of flour bags are concerned, HANDS Pakistan’s Facebook post confirms that it is distributing similar bags among the afflicted.