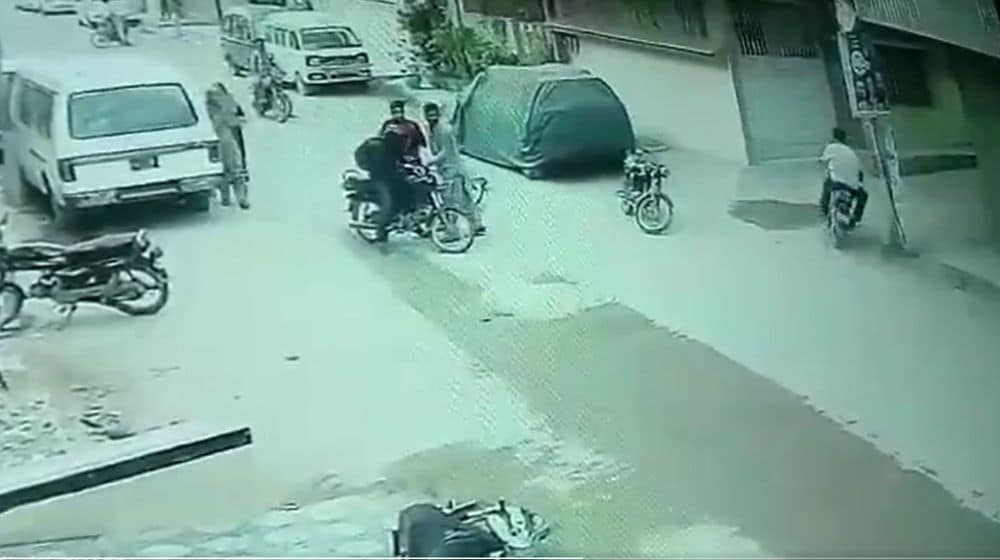 CCTV footage, currently doing the rounds on the internet, shows the extent of Karachi’s street crimes and its citizens’ helplessness, both of which have risen to alarming levels of late.

The video is an unfortunate mix of accident, confusion, and the unbridled rampage of robbers who looted nearly every passer-by for about two-and-a-half minutes and fled comfortably.

The incident reportedly happened in Block 17 of Karachi’s Gulberg area where the looters first crashed their motorbike into a citizen’s, and then went on an unstoppable looting spree, robbing poor citizens of their bikes, phones, and money.

Street crimes in Karachi have lately gone through the roof. Although they’re a longtime nuisance to the city, the current spike in such incidents looks quite unprecedented.

In the month of September alone, at least 12 citizens were killed during street crimes in Karachi.

Karachi Police, however, continues to downplay the grave problem. “Crime rate in Karachi is lower than American and Indian cities,” AIG Odho claimed while addressing businessmen and industrialists at the Karachi Chamber of Commerce and Industry (KCCI) last week.

“Even the crime rate in Lahore is higher than Karachi,” he said, adding, “If the daily wage earners are evicted from the city, it will have an impact on crime.”

In addition, he blamed the business community for spreading untrue information about harassment, extortion, and street violence in the media, which scared off investors from the metropolis.