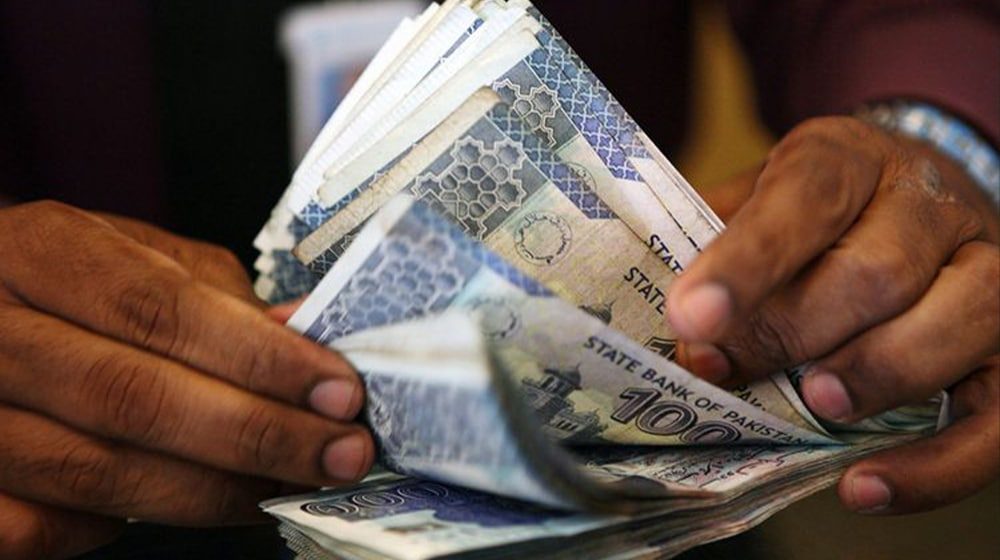 The Pakistani Rupee (PKR) halted losses against the US Dollar (USD) and posted gains during intraday trade today.

It appreciated by 0.03 percent against the USD and closed at Rs. 239.65 after gaining six paisas in the interbank market today. The local unit quoted an intra-day low of Rs. 239.625 against the USD during today’s open market session. 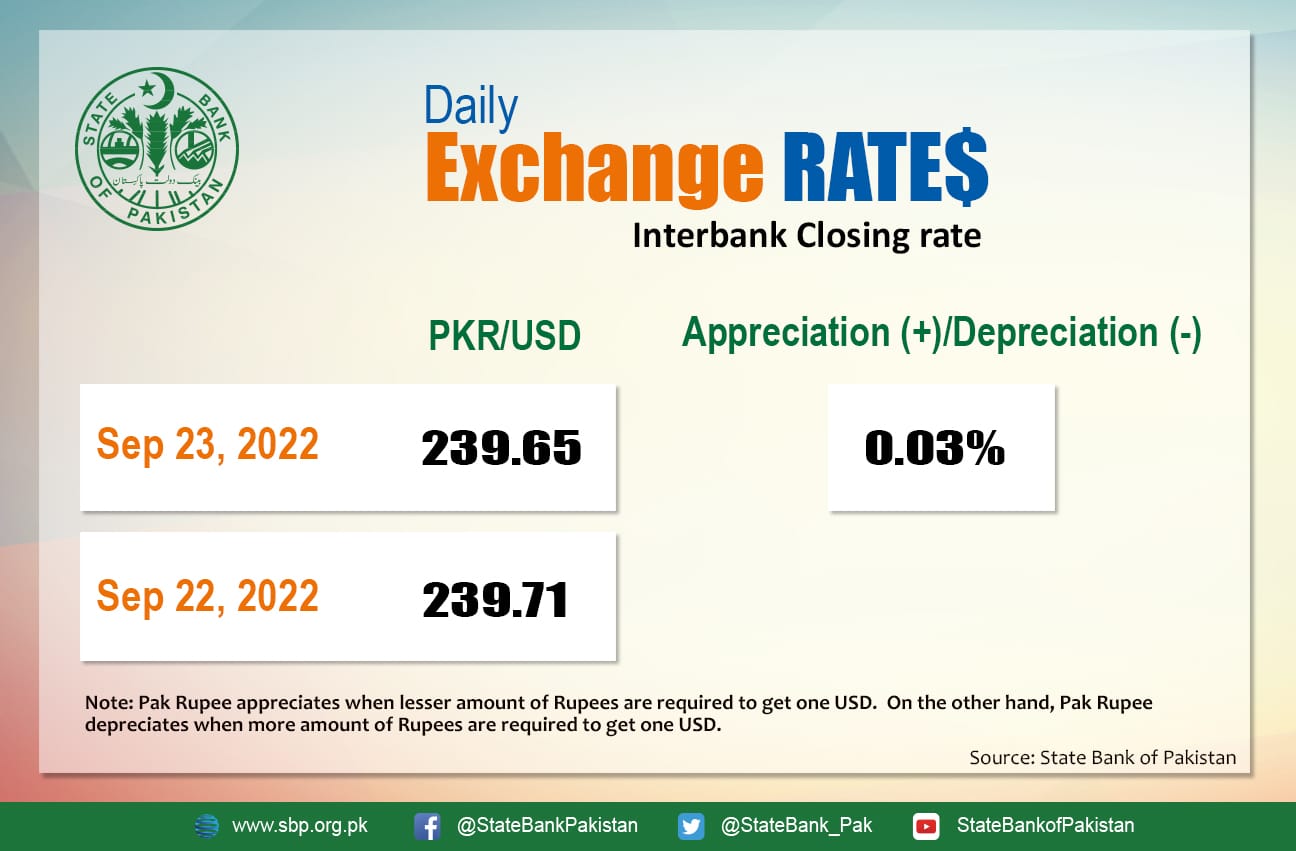 The local unit was opened in green on the opening bell and was trading at 239.00 at 10 AM. By midday, the greenback went as low as 239.60 against the rupee. After 2 PM, the local unit stayed at the 239 level against the top foreign currency before the interbank close.

The rupee ended its 15-day losing streak against the dollar today.  However, the country’s reserves continue to fall, with the central bank’s foreign exchange reserves falling by $278 million to $8.35 billion as of September 16, 2022, according to SBP data released on Thursday. The country’s total liquid foreign reserves were $14.07 billion as of Thursday, according to the SBP. Commercial banks held $5.72 billion in net foreign reserves.

A lack of reserves is a negative for the currency market and adds pressure to the rupee, which had its worst monthly performance in over 50 years in July.

Overall, the economic damage caused by the recent floods, the evolving political crisis, and increasing doubts about the nation’s ability to meet International Monetary Fund (IMF) targets could create more problems. Pakistan’s sovereign bonds are trading in the 50s on elevated concerns about its external position and an evolving political crisis. The country faces a laundry list of issues: deterioration in the current account, a widening trade deficit, currency pressures and central bank interventions, rising cost pressures, and damage from record flooding.

Globally, oil fell on Friday as demand fears were stoked by rising interest rates and a rampant dollar, though losses were capped by Moscow’s mobilization campaign in its war with Ukraine and apparent deadlock in talks on reviving the Iran nuclear deal.

On Friday, global equities fell to a two-year low, while the dollar index rose to its highest level in 20 years, putting downward pressure on the oil markets.

On the supply side, efforts to resurrect the 2015 Iran nuclear deal have stalled because Tehran insists on the closure of the United Nations nuclear watchdog’s investigations, according to a senior US State Department official, dampening hopes for a resurgence of Iranian crude oil exports.

The PKR reversed losses against the other major currencies in the interbank market today. It gained one paisa against the UAE Dirham (AED), Rs. 1.13 against the Canadian Dollar (CAD). Rs. 1.30 against the Australian Dollar (AUD), Rs. 2.57 against the Euro (EUR), and Rs. 3.69 against the Pound Sterling (GBP). 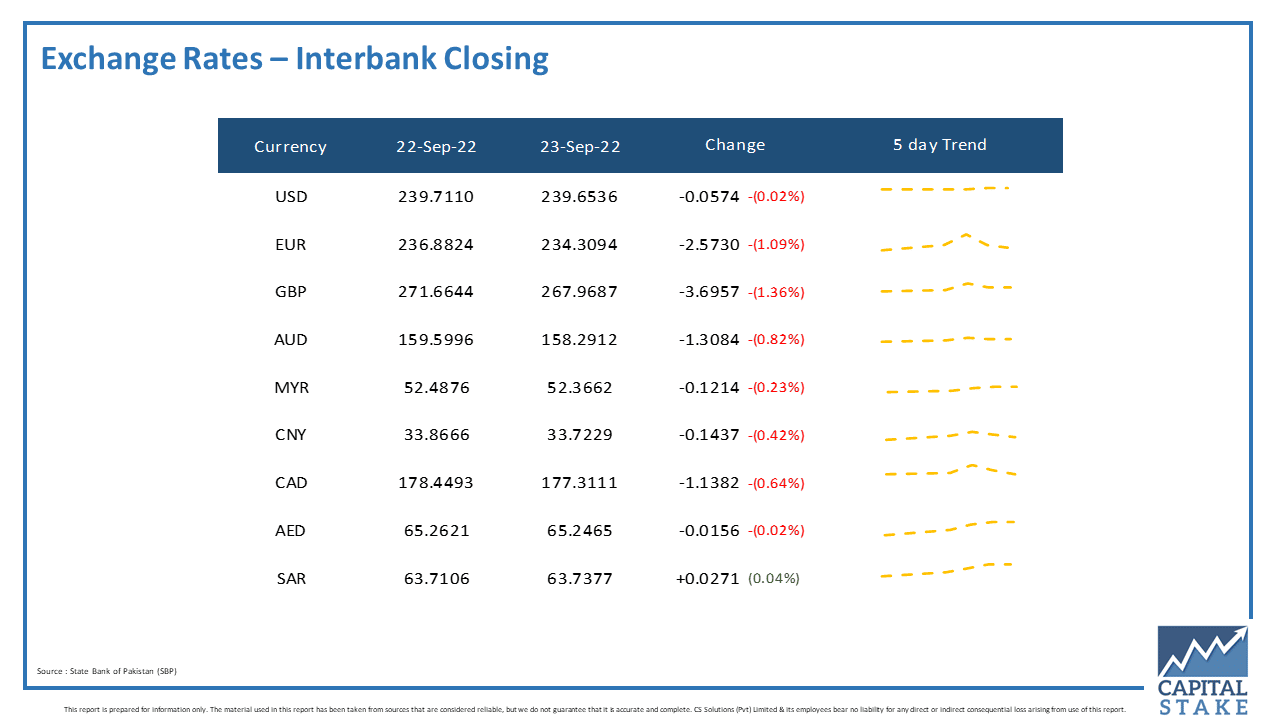 Conversely, it lost one paisa against the Saudi Riyal (SAR) in today’s interbank currency market.