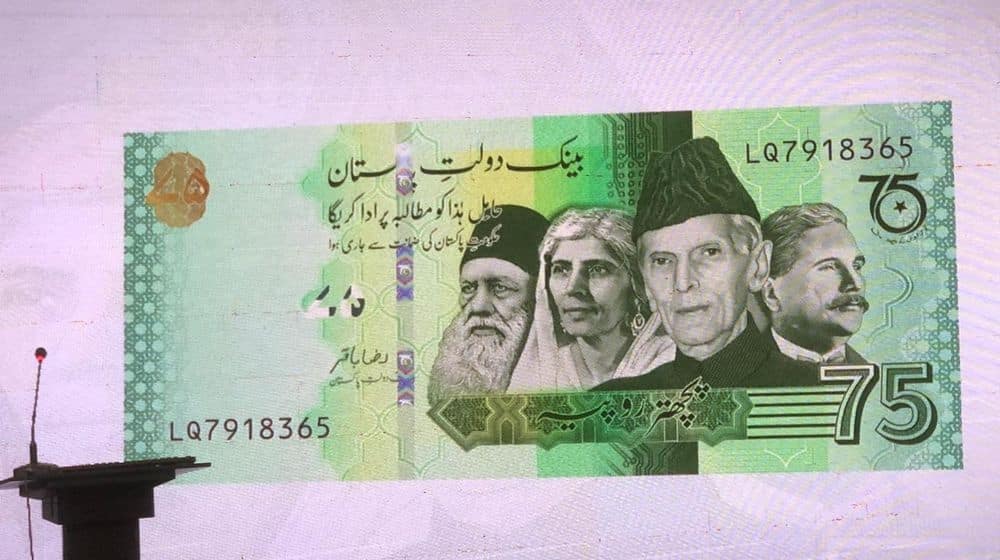 The State Bank of Pakistan (SBP) issued a commemorative banknote of Rs. 75 on the occasion of the 75th anniversary of Pakistan’s independence.

The design of this commemorative banknote was unveiled on August 14, 2022, during a ceremony at SBP headquarters, in Karachi.

The commemorative banknote will be available for the general public from SBP BSC offices and Commercial Banks’ branches from tomorrow. This banknote is legal tender under section 25 of the SBP Act, 1956, and can be used as a medium of exchange for all transactions across Pakistan.

The commemorative banknote has been designed to pay tribute to the leaders contributing towards the creation of Pakistan and create awareness about climate change and its impact on our environment. Accordingly, the obverse of the banknote is graced with the portraits of Quaid-i-Azam Muhammad Ali Jinnah, Allama Sir Muhammad Iqbal, Mohtarma Fatima Jinnah and Sir Syed Ahmed Khan.

The reverse of the banknote highlights our national commitment towards climate change and its repercussions for Pakistan, which has gained added urgency in light of unprecedented loss caused by the recent torrential rains and flooding in large parts of Pakistan.

The images of the national animal Markhor and the national tree Deodar on the reverse also highlight the danger of extinction of such species and the need to preserve them. An interactive video of the design can be viewed here.