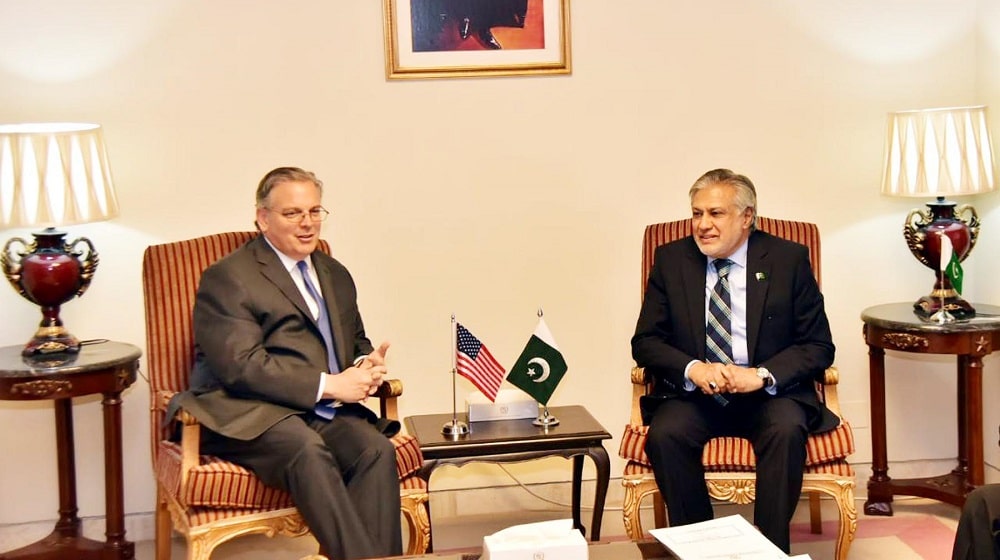 Finance Minister Ishaq Dar has commended the support of the United States and said that it has always been a great support for Pakistan during tough times.

US Ambassador to Pakistan Donald Blome called on Finance Minister Ishaq Dar on Tuesday. The finance minister welcomed the envoy and highlighted the historic and durable bilateral relations with the US on the economic and trade front.

He apprised the ambassador about the ongoing post-flood reconstruction and rehabilitation projects being undertaken by the present government. It was shared that the present government is highly concerned about the well-being of the masses therefore several measures are being undertaken in this regard. Both sides shared other matters of common interest as well during the meeting.

The finance minister apprised the ambassador about the government’s comprehensive and pragmatic plans in terms of revenues and expenditures for meeting its national as well as international financial obligations.

The envoy acknowledged the huge level of economic losses being faced by Pakistan due to the flood crisis and shared that the US government stands with Pakistan in such testing times.

The minister shared various economic avenues in which both countries can further deepen their economic relations.

SAPM on Finance Mr. Tariq Bajwa, Secretary Finance, and other senior officers from Finance Division participated in the meeting.