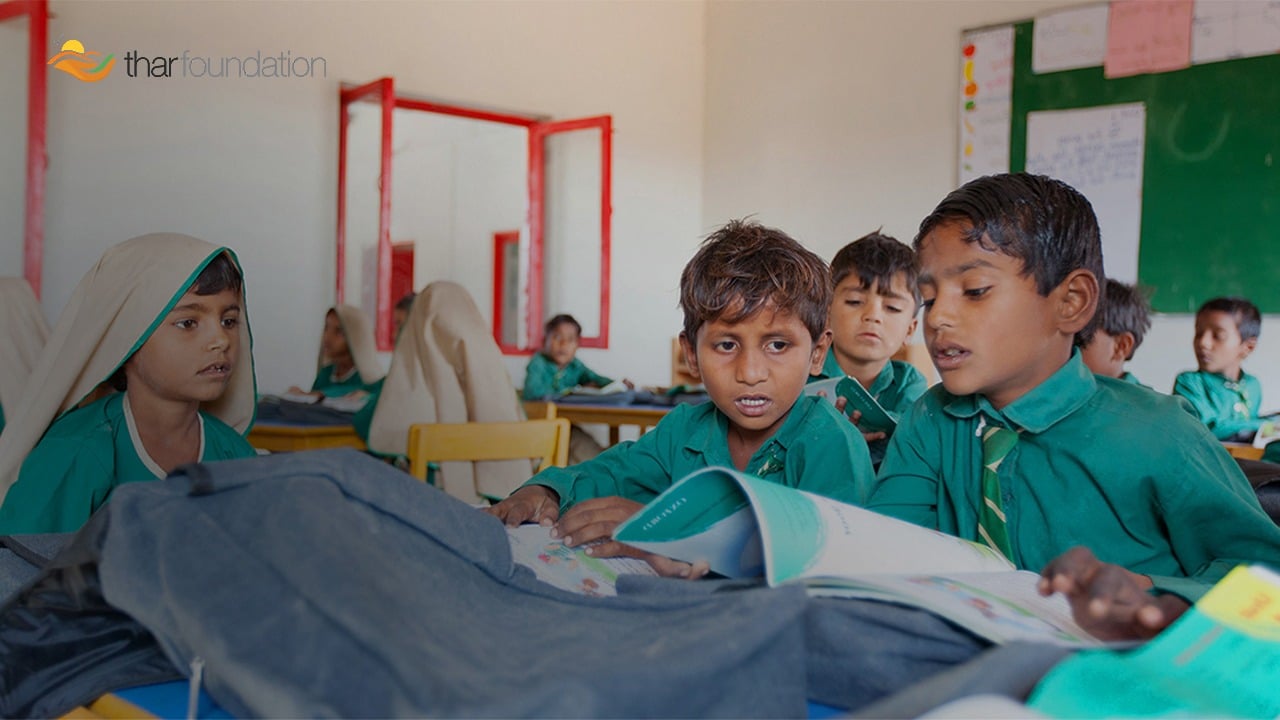 One of the most pressing challenges of the highly marginalized community of Thar has been access to basic education.

The Tharparkar region comprises very limited access to education with a lack of schooling facilities and, resultantly, a low level of enrolment ratio.

Even in comparison with the rates in other parts of the province of Sindh, students here drop out more frequently to contribute to the limited family incomes.

Consequently, the literacy rates are one of the lowest in the province.

Out of all eleven up-scaled districts in Sindh, only two districts have literacy rates higher than 50, a significant statistic considering that the literacy rate is estimated to be 59.6%.

Literacy in the district is very dismal, with an average rate of just 39.7%.

This region has been deprived of the necessities of life for far too long, but with the recent economic activity in the region related to the energy industry, there has been some silver lining for the people of Thar.

It is said that economic prosperity brings social progress and Thar is a prime example of it.

The Foundation’s mission is to unlock the human potential of the people of Thar through the adoption of the inclusive business model.

Moreover, the Foundation has adopted the UN Sustainable Development Goals Framework under which various interventions are undertaken to ensure that the main beneficiaries of the project are the people of Thar Block II.

The overarching theme of all the programs is to alleviate poverty, provide means of sustainable livelihoods, improve access to health care, clean water, and sanitation, improve gender equality, and give high importance to providing education to all.

It operates 27 school units in Thar Block II, with almost 4,100 students enrolled (with a combined student capacity of 5,500 in the areas of Mithi and Islamkot).

Out of the total enrollment of students at these schools; 1,400 i.e., 33% are female students compared to 67% male students.

There are three sizable secondary campuses with five schools each. These campuses, which can each hold 1,000 children, are made up of three primary and two secondary school divisions.

Going forward, Thar Foundation is working to manage and run the majority of the school in Islamkot along with its educational partners.

Additionally, the foundation has taken the initiative of improving the education system in Thar by not only establishing a state-of-the-art education institution but also sending students for higher education through sponsorships.

Around 140 students have received scholarships so far and additionally, 100 students were also sent to China for training on O&M of power plants so that their chances for employment in the local energy industry are enhanced.

To recruit locals in engineering and management cadres, 25 young Thari trainee engineers underwent a year-long training program, in collaboration with a notable educational institute IBA and Carnelian Institute in Karachi.

Additionally, in partnership with Saylani Institute, 25 students from Thar were also trained in IT services and 170 students were trained as diploma engineers by the GPI Mithi. 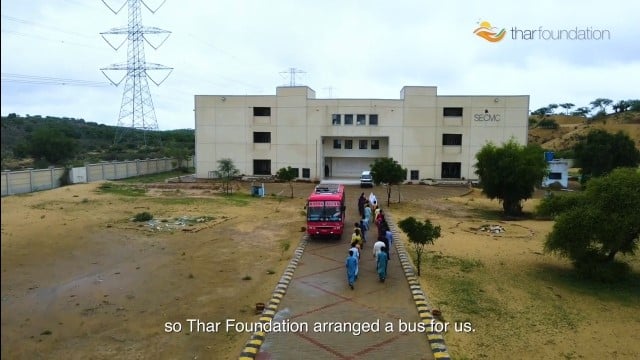 The Thar Foundation is working with the Higher Education Commission to build a top-notch NED University campus in Islamkot. For this initiative, development has already gotten underway.

To offer the Thari youth numerous possibilities for higher education, the Thar Foundation has partnered with the Institute of Business Administration (IBA) and Mehran University of Engineering and Technology (MUET).

Thar Foundation’s programs are intended to promote high-quality education to maximize human potential for the locals of Thari communities.

By building a network of elementary and secondary school units, and further avenues to education, That Foundation has shown a strong commitment to enhancing the educational statistics of the area.

Promoting Avenues for Children of Thar

Thar Foundation has positively impacted the lives of many children and their families. They have the story of Sughar and Rajhan; siblings from Mansingh Bheel, Tharparkar.

Ranjhan has played a vital role in paving a path of growing acceptance for the education of girls in Tharparkar.

‘The girls of this village don’t study’ – Sughar 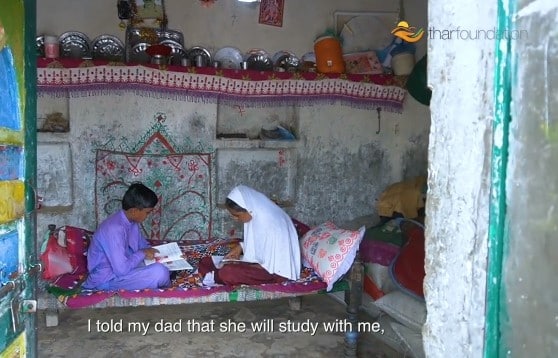 Ranjhan has not only proved himself to be a role model of a brother in his community, but he also helped establish the fact that girls have great potential that can be achieved when the constraints of gender norms are lifted.

His little step of ambitions has been an eye-opener to the endless ways that the girls of Thar are very much capable of achieving education and knowledge.

“I told my dad, why can’t she study with me?  I am her brother, I will help her study”, Ranjhan asserts. 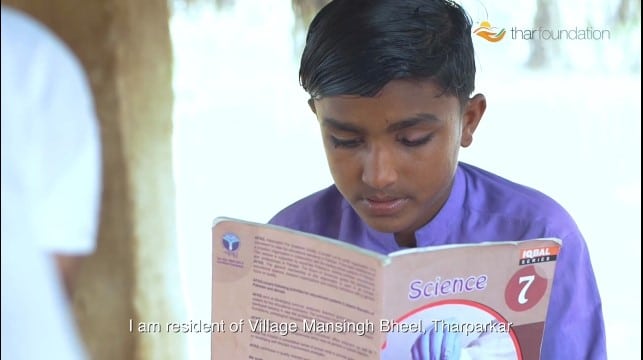 Sughar, Ranjhan’s sister, tells how difficult it is for the girls in Thar to convince their parents for pursuing education; “They say girls shouldn’t go to school, they’re supposed to stay home and do household chores,” the young girl said. 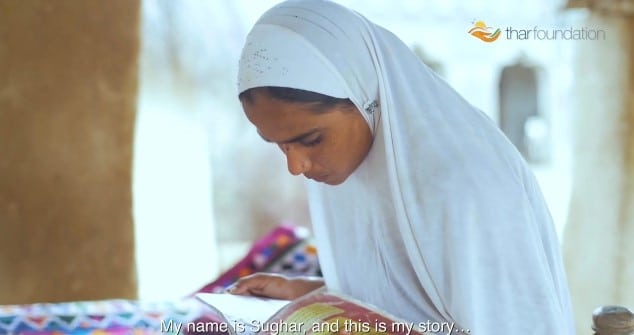 Sughar is the first of two girls from her village to receive an education up to secondary school.

In narrating her story, Sughar further emphasized, “I told my dad not to listen to the villagers, listen to me, I am passionate about studying, and achieving something for myself.”

This young girl, and her courage, are commendable. She set a new example by fighting the myth of ‘what would people say?’ She took a step forward and amplified the voices of many other girls her age. 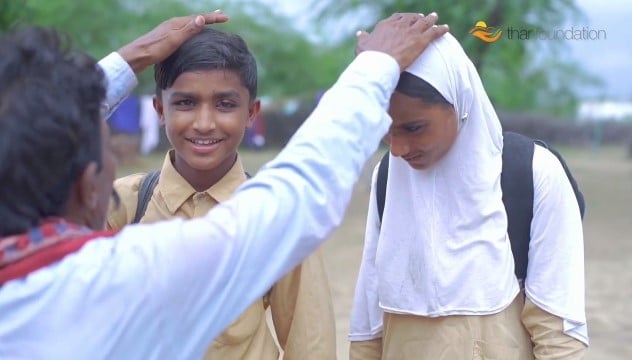 Sughar also explained how difficult it is for girls her age to commute from their villages to the schools.

Thar Foundation aided the dreams of Sughar and many others by taking care of little hurdles such as commute. ‘Thar Foundation arranged a bus for us. It has become very convenient to go to school now,” she said. 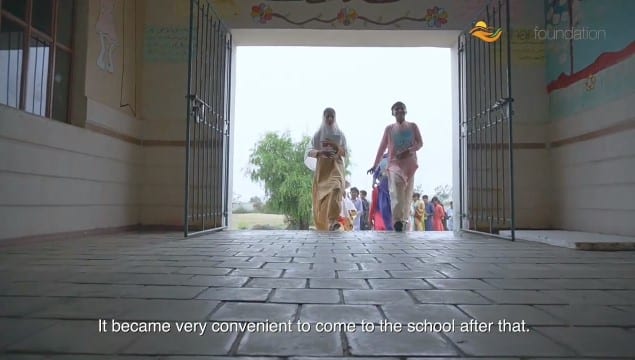 The education initiative taken by the Thar Foundation has made the people of Thar confident enough to step out of their comfort zones and encouraged them towards education and its importance.

‘Education is the most powerful weapon in the world’ – Rajhan 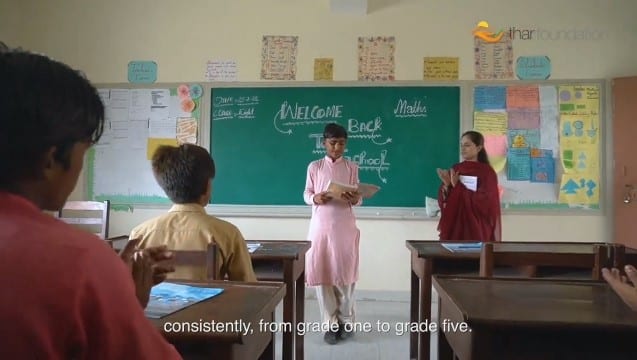 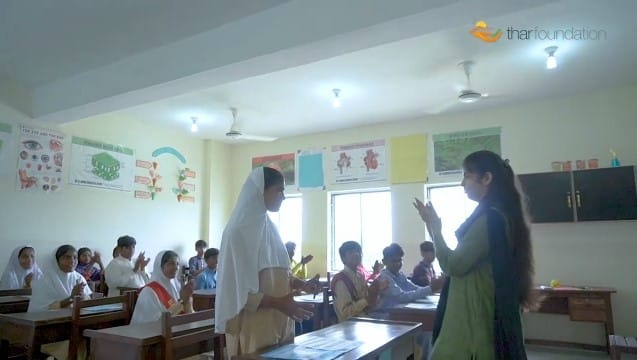 Ansari also said, “Thar Foundation especially stresses on education and employment for women. We are also working towards more schools just for girls.” 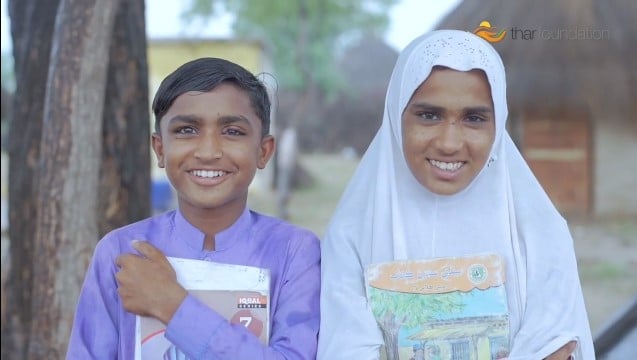 The community of Thar has a conservative mindset, and rightfully so, due to the difficulties and traditional challenges they have been facing in the region.

However, with CSR wing such as Thar Foundation that kicked off in the region, the society has begun to accept the idea of improved socio-economic conditions and has welcomed initiatives that uplift their living standards.

In the end, it was the desire, ambition, and passion of fearless Sughar and talented Ranjhan to follow their heart towards the pathway of education – which is the key to forming a better livelihood and future.

As Rajhan previously mentioned – ‘education is the most powerful weapon in the world and there is no denying that.