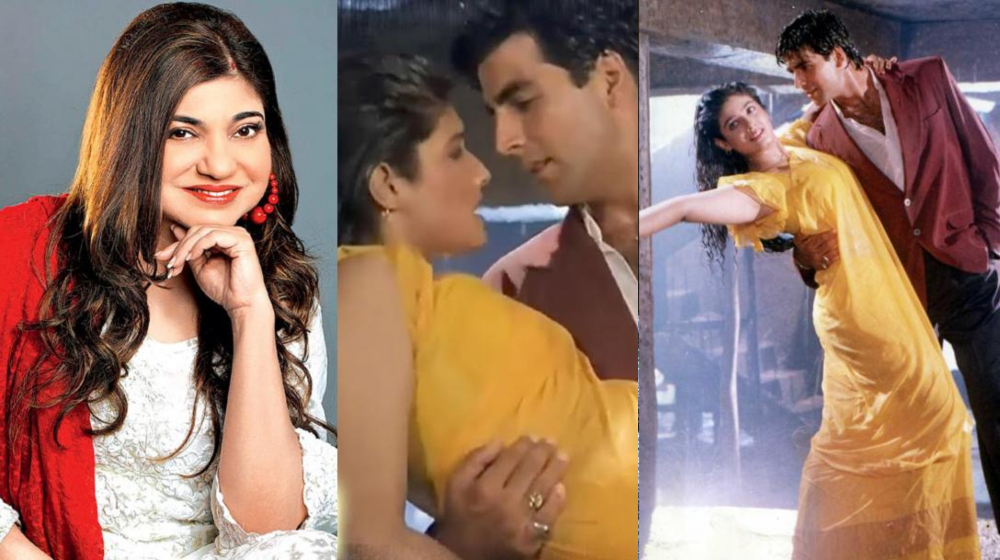 Bollywood is really big on remixes and reboots, but whoever said ‘don’t fix what ain’t broken‘ was onto something. That’s why the original vocalist behind Mohra’s iconic tune ‘Tip Tip Barsa Paani‘ is outraged at the remix. Alka Yagnik is having none of this new version of her original hit.

Alka Yagnik is a huge brand in Bollywood. The songstress has voiced many iconic tracks from the 80s and 90s. Not only is Alka Yagnik unhappy with Bollywood’s remake streak, but she’s calling the remix to her sensual song, ‘disgusting‘.

“What can I say? I am thoroughly disgusted. They are tampering with all the evergreens and popular songs… ruining them. It is just so shameful. Our past hit songs are being remixed to suit bar lounges and clubs, for young people to dance to.”

The voice behind the sensual song Tip Tip Barsa Paani, Alka pointed out how remixes are mostly just dance numbers.

Art like music reflects culture. So as culture evolves we need to make fresh and relevant content. This does not include remixing classics to fit in. If someone were to remix Akeelay Na Bazaar Jaya Karo, it could mean a restraining order and harassment lawsuit in this day and age.

Alka Yagnik called out the lack of creativity among today’s composers. The songstress pointed out how hit tracks from a bygone era are being ruined to milk money.

(They can’t compose good original songs. Therefore they ruin already superhit songs and then claim they’ve made hits. Those songs were already hit tracks that’s why you chose them).”

The songstress is glad she’s not a contemporary singer. That way her vocals wouldn’t be on original tracks.

“I’m glad I came into the industry earlier, at least I got to sing some beautiful songs. Aaj ke daur mein sab chalta hai (nowadays everything goes). Hopeless! From the 60s to now, what a downfall!”

That track did not create waves like the original, although it did create a temporary ripple. While the original Tip Tip Barsa Paani was picturized on Akshay Kumar and Raveena Tandon, the remix retains Akshay Kumar, but this time he’s paired with Katrina Kaif.

Besides Alka Yagnik, even Raveena Tandon’s fans are up in arms on social media.

Recently, the famed writer Javed Akhtar also called out the remix for changing the lyrics. He pointed out how he filed lawsuits from his songs being changed, but Anand Bakshi has unfortunately passed and can’t do so.

“Unfortunately, Anand Bakshi sahib is not around anymore to protest against this kind of desecration,…..This is sheer vandalism.”

Bollywood pioneer rapper Baba Sehgal went as far as to call Bollywood ‘copy-wood‘. He said that while there’s nothing wrong with a remix, doing it to milk superhit status of classic tracks is wrong.