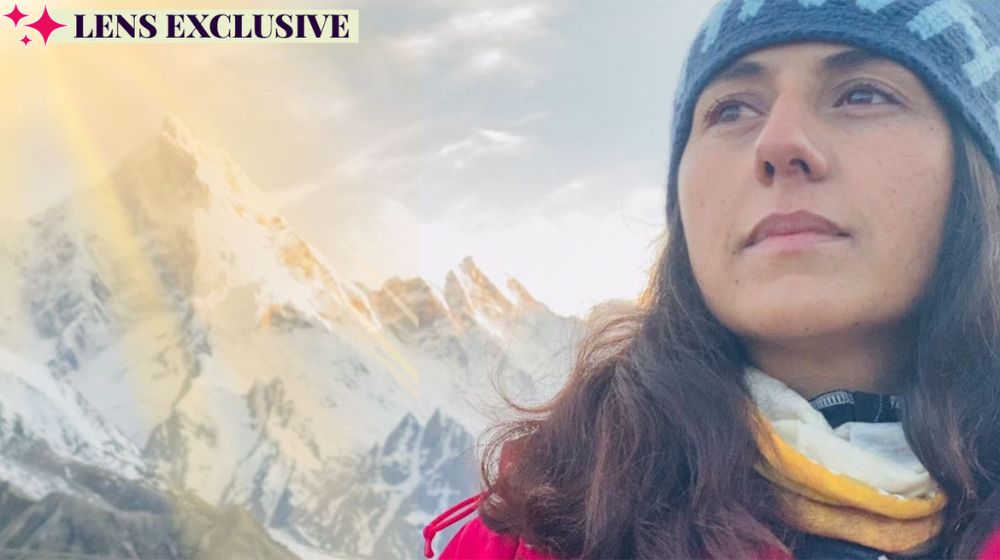 Mountaineering – do you need to be intrinsically gifted to pursue it? Does it come with relentless training since adolescence? Or is it a feeling that blooms from within? How different the world feels and looks, miles high from the summit, LENS, deep dives into an exclusive conversation with the queen of mountains; Samina Baig.

The self-made mountaineer – is the first Pakistani woman to summit some of the highest peaks of the world. 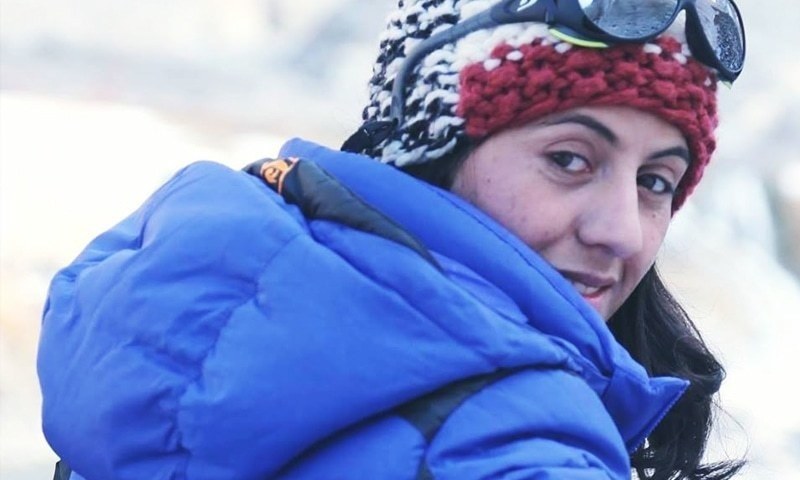 From her childhood to summitting Everest and K2, listen to Samina’s story in her own words.

How It All Began…

I was born in Shamshali. It is my origin from where I began my journey of adventure and expeditions. Since my childhood, I was very much fond of mountain climbing. When I was in Grade 4 I remember my brother used to tell me stories about mountain climbing. So it all originated from there. I had always seen my brothers climbing mountains from quite a young age. I was trained by my four brothers and it became my utmost passion and an ultimate goal to summit the famous highest peaks of the world.

In 2010, I started mountain climbing along with my brother Mirza Ali. So when I set off for my first expedition I did not have sufficient knowledge regarding the hardships and dangers of mountaineering. Yet, I went ahead on this adventure and I summited a mountain that was an inclined peak and was 6000 feet high named Chashkin Sar.

It felt like a true achievement and something I thought I could never do! 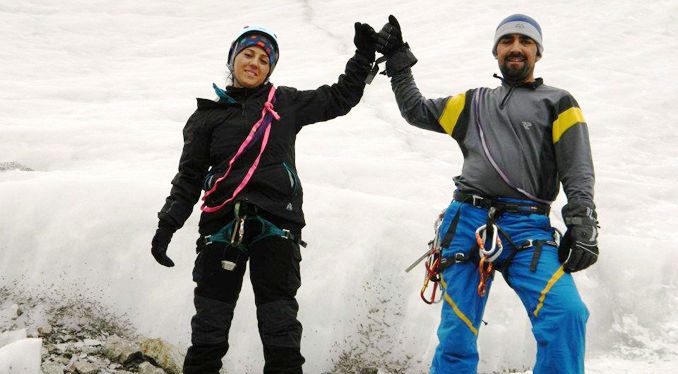 Pakistan is home to five of the world’s 14 mountains higher than 8,000 meters, and climbing them all is considered the ultimate achievement of any mountaineer.

K2 and Mount Everest are the two peaks that have been a great challenge for Samina. Besides being far more technically difficult to climb than Everest, K2 has notoriously fickle weather and has only been scaled by 425 people since 1954 — including around 20 women so far.

More than 6,000 people have climbed Everest since Edmund Hillary and Tenzing Norgay first reached the top in 1953 — some of them tried multiple times but failed.

In 2013, Baig became the first Pakistani woman to climb Everest. Accompanied by her brother Mirza Ali she achieved this milestone courageously. Also, she was fortunate enough to succeed in ascending the K2, known as the “savage mountain”, and the notorious Nanga Parbat, nicknamed the “killer mountain”. Samina had the ultimate courage to summit such difficult peaks that a majority of mountaineers have failed to achieve nationally and internationally.

Being a girl, Baig, faced quite the challenges to become a mountaineer and breaking the stereotypical taboos.

“I belong to a village and having this dream of mountaineering was impossible. Being just a village girl it was quite difficult to succeed.”

Summiting different heights ignited the fire within and she got this burning desire to summit Everest and K2.

Women like Samina are an asset and she certainly is one of the assets and pride of Pakistan. Not everyone can achieve what she has accomplished. Baig was lucky enough that K2 allowed her to stand atop its incredible peak.

Samina and her brother Mirza Ali are the first siblings to complete the seven summits in seven continents. 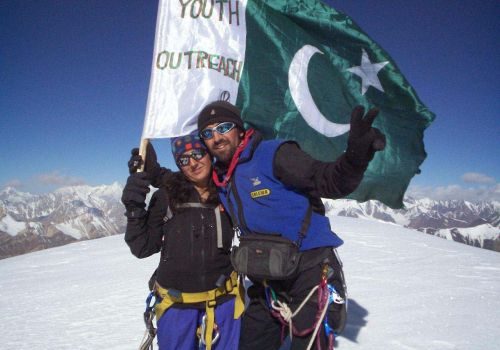 Fact: Chashkin Sar mountain which was summited by Baig in 2013 was later named after her as Samina Peak.

“I am the only woman in our country to have a peak in my name and the peak will live with it forever!”

Who has been your inspiration? or who motivated you to achieve these milestones?

My brother Mirza Ali. He is my mentor, he has been my inspiration. Since my salad days, he had given me the training and had prepared me physically and mentally for this challenging voyage. Whenever I got cold feet he was there to boost up my confidence, encourage me, and persuade me. It was my aim to do this for my beloved country and my brother. 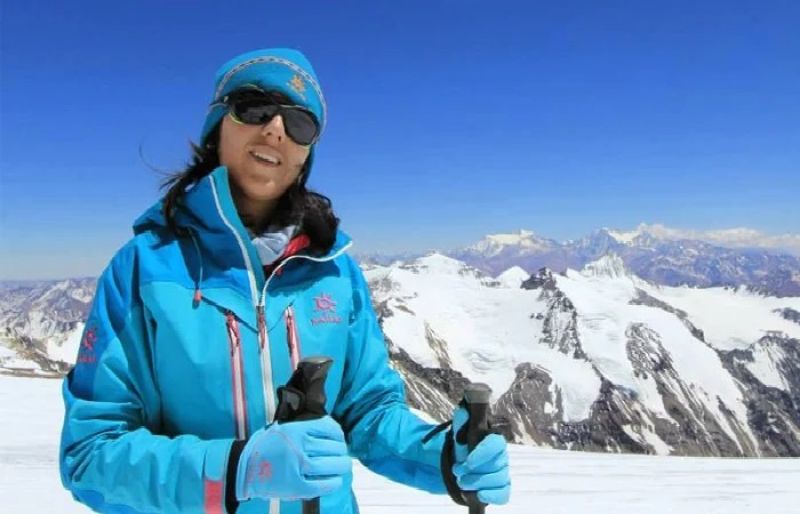 You are no doubt a courageous young woman. But do you ever fear for your life or safety when you’re climbing such great heights in such tough circumstances?

I keep my feelings in check and stay prepared to experience avalanches, rock falls, crevasse falls, or harsh weather ahead. Also, I take safety measures as well as mentally makeup myself to overcome any of such mishaps.  I never give in to my fears ever, I remain prepared for all consequences even when I leave my camp I keep that in mind that my next steps of mine are definitely dangerous and fatal.

What were your feelings while you were atop these Summits?

When I reached the peak realizing that I am the first Pakistani woman to accomplish this incredible mission and when Ali and I oscillated the flag of Pakistan it was unimaginable and I was over the moon. It is a feeling I am unable to explain in words. 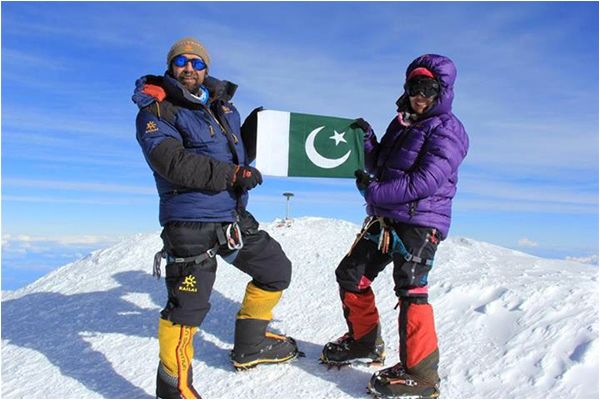 Is it possible for everyone to climb these peaks?

Not everybody can summit Everest or K2 it’s a real struggle, not at all a piece of cake.

Share your experience achieving your goals with your brother Mirza Ali?

My brother and I, we both climbed Everest side by side also the seven summits for Gender Equality and Women Empowerment to convey a motivational message to all the siblings of our country that they can achieve anything in life when they are together, united. 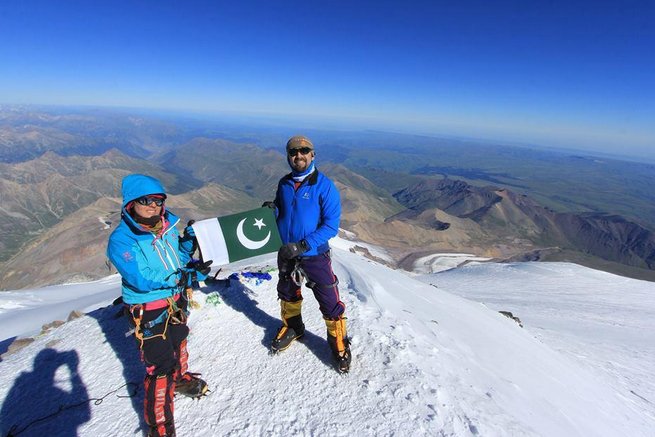 We both were the source of encouragement for each other because when I felt tired or demotivated almost on the verge of giving up. Ali would encourage me and whenever he felt low I would boost up his confidence. So it’s a complete encouragement package and has always been inspirational.

Did you ever face any mishaps while climbing?

I still recall that when I was on my quest at Chashkin Sar, and when I got close to the top my right leg got numb. At that moment, I thought that I can’t do this but people with me had to boost my morale. I realized that I have worked really hard to get here and I should accomplish this mission. My brother massaged my leg and gave me every possible aid to stand up on my feet again and reach the apex.

A message you would like to convey to the women of our country?

I would like to give a message to the lionhearted women of my country that never lose hope, and be courageous. Life is a hard challenge, we women are strong, valiant and stouthearted, we can achieve anything in life. So work hard and nothing is impossible to achieve when you are determined and committed.